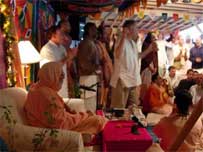 This is my tenth visit to Badger. Each year I travel around the world and remind everyone about krsna-bhajana. I encourage the devotees not to be weak. I tell them to be strong in bhakti.

I have also explained Raya Ramananda Samvad, which will very soon come to you in the form of a book. I have explained Rupa-siksa, Sanatana-siksa and so many other topics. Although I have only touched on all these transcendental topics, I have explained almost everything to you.

Krsna-tattva (the established philosophical truths regarding Lord Sri Krsna) is like an endless ocean. I have touched that ocean, and I want to give you at least a particle of it so that your life will be happy.

This year I thought I should give you the teachings of the book, Sri Bhagavata Arka Maricimala. This book is the essence of Srimad-Bhagavatam, as it is written by Srila Bhaktivinoda Thakura. No one had given this before him.

In Garuda-Purana it has been written:

Srimad-Bhagavatam is supreme among all the literature written by Srila Vyasadeva. Many rsis (sages) and maharsis (saintly kings) like Sankaracarya, Ramanuja, Madhvacarya, Visnusvami, Nimbaditya and others have written commentaries on this, but something was lacking in them. Sri Caitanya Mahaprabhu then came and gave its full meaning.

Srila Bhaktivinoda Thakura tells us in his Bhagavata Arka Maricimala. “I am going to write something, but I fear to do so.” Srila Krsnadasa Kaviraja Gosvami also feared when he was writing Sri Caitanya-caritamrta. He considered, “Sri Caitanya-caritamrta is so high class that very rare persons are qualified to read this; so what should I do? Should I not write it?” But then he concluded, “If I do not write about these transcendental topics, they will disappear from this world.” He felt compelled, thinking, “Birds like the cuckoo only eat the manjaris (buds or stamin) and sweet essence of a mango. A crow cannot do this. Crows only like bitter things, like the juice of nima. If I write this Caitanya-caritamrta, then naturally the cuckoo-like devotee will read it, and the crow-like non-devotee will not have interest. So I must write".

Srila Bhaktivinoda Thakura's fear was different. He wondered, “What should I do? If I write, then a desire for fame may develop in my heart, and this is very bad for a Vaisnava. He also considered, though, "I was thinking I should not tell these very secret topics to others, but then I remembered the words of my Gurudeva. I determined, ‘If he has ordered me to write, I must do so. If I do not write about all the topics ordered by him, I will be ungrateful. I must do it!’ I threw out my shame and began to write, ‘O Gurudeva Vipin-bihari Prabhu, O exalted Vaisnavas, if I have committed any offenses, please forgive me.’”

Srila Prabhupada Bhaktisidhanta Sarasvati Thakura has not mentioned the name of Srila Bhaktivinoda Thakura's Guru in the list of acaryas in our guru-parampara. Prabhupada was against the caste Gosvamis. Vipin-bihari Prabhu once put his feet on the head of Srila Bhaktivinoda Thakura, who is a manifestation of Sri Gadadhara Pandita – Srimati Radhika – and Srila Sarasvati Thakura Prabhupada could not tolerate this. He told Vipina-bihari Prabhu, “What nonsense are you doing? Do you know who he is? He is one of the Gosvamis – Gaura-sakti Gadadhara Pandita – and still you have put your feet on his head? He thus rebuked Vipina-bihari Prabhu, who then ran away.

Srila Bhaktivinoda Thakura continued, “I took the order of my Gurudeva on my head and began to write down this verse [SB 1.1.1], because he had told me, ‘Go on reading, and try to understand. Srimad-Bhagavatam is Sri Krsna Himself. Everything will be revealed in your heart.’

“In the same way Svarupa Damodara came and told me, ‘You must do it. Take the prominent verses – the essence of the verses – of Srimad-Bhagavatam. All the verses from Srimad-Bhagavatam are prominent, but you should take the essence according to the principals of sambandha (our relationship with the supreme Lord Krsna), abhideya (the process to attain him) and prayojana (the ultimate goal of life). Explain, through these verses, the living being's relationship with Sri Krsna, as well as the process to realize that relationship, as told by Srila Rupa Gosvami. (In his Bhakti-rasamrta sindu, Srila Rupa Gosvami has explained the sixty four limbs of bhakti.) And finally, you should explain the ultimate goal – krsna-prema. Select verses according to subject, make a garland of these verses, and place this garland in the hands of Srimati Radhika. She will give it to Sri Krsna, and He will be very happy.’

“He told me, ‘If you compile this book, it will be very, very important. All Vaisnavas who truly want bhakti will read it and practice bhakti according to its teachings.’ He also said, ‘I myself will explain Srimad-Bhagavatam's first verse:

["O my Lord, Sri Krsna, son of Vasudeva, O all-pervading Personality of Godhead, I offer my respectful obeisances unto You. I meditate upon Lord Sri Krsna because He is the Absolute Truth and the primeval cause of all causes of the creation, sustenance and destruction of the manifested universes. He is directly and indirectly conscious of all manifestations, and He is independent because there is no other cause beyond Him. It is He only who first imparted the Vedic knowledge unto the heart of Brahmaji, the original living being. By Him even the great sages and demigods are placed into illusion, as one is bewildered by the illusory representations of water seen in fire, or land seen on water. Only because of Him do the material universes, temporarily manifested by the reactions of the three modes of nature, appear factual, although they are unreal. I therefore meditate upon Him, Lord Sri Krsna, who is eternally existent in the transcendental abode, which is forever free from the illusory representations of the material world. I meditate upon Him, for He is the Absolute Truth. (Srimad-Bhagavatam 1.1.1)]

This verse is important, for the entire Srimad-Bhagavatam is present herein. All the pastimes of Lord Sri Krsna and all Vaisnava philosophy are present in this verse. It is so profound that the general devotee cannot understand it.

When I first read this verse of Srimad-Bhagavatam, along with the commentaries of Srila Sanatana Gosvami, Srila Jiva Gosvami and, Srila Visvanatha Cakravarti Thakura, I could not understand the meaning. Then, by chance I read this book, Bhagavad Arka Maricimala. Reading the presentation of Srila Bhaktivinoda Thakura's revelation of Srila Svarupa Damodara's explanation made it possible for me to easily understand it.

I want to begin discussing something from this book. In previous visits I have told you about the aim and object of sadhana-bhajana – gopi-prema, over and above that, radhika-prema, and finally the mood of the manjaris. You should know all this. Now you should try to follow the process told by Srila Rupa Gosvami in Sri Bhakti-rasamrta-sindhu, beginning from “adau guru-padasraya (accepting the shelter of the lotus feet of the bona fide, self-realized Guru), visrambena-seva (serving the Guru with intimacy), siksa (following his instructions), diksa (taking initiation) and the rest of the ten limbs of bhakti in relation of Sri Guru.

Begin from Guru. If your foundation is strong – your belief in Guru is strong – then, on this foundation, krsna-katha and all philosophical truths will be revealed to you. If a man is chanting and remembering but at the same time criticizing others, what will happen? His bhakti will be finished. We should first try to follow Sri Upadesamrta:

["A sober person who can tolerate the urge to speak, the mind’s demands, the actions of anger and the urges of the tongue, belly and genitals is qualified to make disciples all over the world." (Nectar of Instruction, verse 1)]

["One’s devotional service is spoiled when he becomes too entangled in the following six activities: (1) eating more than necessary or collecting more funds than required; (2) over endeavoring for mundane things that are very difficult to obtain; (3) talking unnecessarily about mundane subject matters; (4) Practicing the scriptural rules and regulations only for the sake of following them and not for the sake of spiritual advancement, or rejecting the rules and regulations of the scriptures and working independently or whimsically; (5) associating with worldly-minded persons who are not interested in Krsna consciousness; and (6) being greedy for mundane achievements." (Nectar of Instruction, verse 2)]

["There are six principles favorable to the execution of pure devotional service: (1) being enthusiastic, (2) endeavoring with confidence, (3) being patient, (4) acting according to regulative principles such as hearing, chanting and remembering Krsna, (5) abandoning the association of non-devotees, and (6) following in the footsteps of the previous acaryas. These six principles undoubtedly assure the complete success of pure devotional service." (Nectar of Instruction, verse 3)]

["Hearing and chanting about the transcendental holy name, form, qualities, paraphernalia and pastimes of Lord Visnu, remembering them, serving the lotus feet of the Lord, offering the Lord respectful worship with sixteen types of paraphernalia, offering prayers to the Lord, becoming His servant, considering the Lord one’s best friend, and surrendering everything unto Him (in other words, serving Him with the body, mind and words)—these nine processes are accepted as pure devotional service." (Srimad-Bhagavatam 7.5.23)]

If there is some duplicity in your heart, this will create a hole in the bottom of your heart and your bhakti will go away. Even if you have made some advancement in bhakti, what you have will go away. Therefore, it will be best if we explain and hear what Srila Bhaktivinoda Thakura has given us in this Bhagavata Arka Maricimala.

You may find this subject difficult to understand. During the next few days you will not be hearing pastimes like: “Mother Yasoda bound Krsna and Krsna was weeping.” Rather, there is some deep siddhanta here, and you should try to carefully hear and understand it. You can ask questions if you don't understand.

Even one who practices one-pointed devotion to Hari will only create a disturbance if he abandons the rules of Sruti, Smrti, the Purans and the Narada-païcaratra. The remnants of Sri Krsna are called maha-prasada. When a pure devotee honors this maha-prasada, his remnants are called maha-maha-prasada. Sri Krsnadasa Kaviraja Gosvami says in Sri Caitanya-caritamrta (Antya-lila 16.60):

The foot-dust of a devotee, the water that has washed his feet and the remnants of food left by him are three very powerful items. By serving these three items, krsna-prema-bhakti will appear. They are extremely powerful. It is improper for a sadhaka-bhakta to imitate the behavior of pure devotees.

Once, my Gurudeva, then Sri Vinoda-bihari Brahmacari, and his god-brother Sri Narahari Prabhu went to Sri Vamsidasa Babaji’s bhajana-kuti to take his darsana. Babaji had offered tea and was distributing it. Vinoda-bihari and Narahari Prabhu also received some tea prasada. Vinoda-bihari paid his respects to it, put it aside and did not take it. When Narahari Prabhu asked him why, Sri Vinoda-bihari answered philosophically, “An object which is taken by a maha-bhagavata can still be unsuitable for us. Mahadeva drank a deadly poison. He is capable of doing that, but if an ordinary person drinks poison, he is sure to die. For a sadhaka it is only proper to follow the rules of the bhakti-Sastras.”]