How to Fulfill All Your Desires 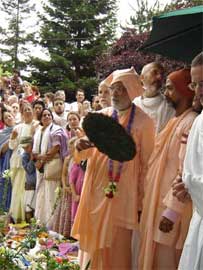 First I want to tell about Govardhana-puja, because tomorrow we will celebrate Govardhana-annakuta (*See Endnote 1). The residents of Vraja were planning to worship the demigod of rain, King Indra; but Krsna did not want this. He wanted to crush Indra’s false pride of thinking himself an independent, universal controller. The residents of Vraja were thinking that Indra gives rain, by that rain grass grows and ponds are filled, and by that grass and pond-water the cows remain alive.

The day before the worship of Indra, Mother Yasoda was cooking various preparations. Krsna asked her, "Mother, what are you doing?" She rebuked Him, saying, "Go play with the boys.” Krsna then asked Nanda Baba, "Father, please tell me what Mother is doing. Is it My birthday?” Nanda Baba replied, “Tomorrow we are going to perform the worship of Indra, because he gives rain and nourishes us. Without him there would be no rain and our cows would die. If our cows die, we will also die.”

Krsna told His father, “Where there is no worship of Indra, is there no rain, nor grass, nor cows? Why are you doing this?” Nanda Baba could not reply. Then Krsna said, “Why not worship Govardhana? Govardhana nourishes the gopis, gopas and all others. It is actually Govardhana who gives the rain. He is so high that clouds hover on him and transform into rain. Govardhana gives grass. He gives water to so many ponds, such as Kusuma-sarovara, Manasi Ganga, Radha-kunda, Syama-kunda and Mana-sarovara. We should try to worship Govardhana."

Nanda Baba accepted this and told all the residents of Vraja, “Tomorrow, we will worship Giriraja Govardhana.”

In the morning, all the residents placed their food preparations into their millions of carts, and millions of gopis and gopas went to that part of Govardhana which is now called Anore-grama.

When they began to worship there, Krsna expanded and became two forms. One was His own form and the other was Harideva, Giriraja Govardhana. Harideva looked like Gopal, but he had four-hands.

Krsna then became a priest and offered the food preparations to Giriraja Govardhana. He asked the Vrajavasis, “Did Indra ever come and give darsana, or any boon? No. But Giriraja Govardhana is giving dasana and also speaking to us.”

Giriraja Govardhana devoured all the offerings by extending His long arms. Begging for more to eat, He called out in great happiness, Ano re! Ano re! (“Bring more! Bring more!”) Krsna folded his hands and said, “We are poor Vrajabasis. Whatever we have, we have presented before You. Please be satisfied with this.” Girirajaji then drank the water of Manasi Ganga, Kusuma Sarovara and other kundas, exclaimed, Trpto ‘smi! Trpto ‘smi! (“I am satisfied! I am satisfied!”), and wiped His hands and mouth with his cloth. He told the Vrajabasis to ask for a boon, and Nanda Baba requested only one: “May this darling little son of ours always remain happy and live a very long life.”

All the Vraja residents then performed parikrama. Those who were old rode on bullock carts and those who were young danced and sang all the while.

Indra became very upset after the worship of Giriraja. Furious, he called his samvartaka clouds and ordered them, "Send to Vrndavana very heavy rain – so much rain that the village will be demolished." Those clouds then poured rain continuously for three days.

The Vrajavasis began to cry for help. Hearing their cry, Krsna lifted Govardhana. All the unlimited gopas, gopis and cows then came under Govardhana, and all of them stayed there for seven days.

Govardhana was ecstatic. Even with thunderbolts hitting him, he was happy thinking, "I am happily situated upon the hand of Sri Krsna.

Indra finally realized his fault and took shelter of Surabhi cow. Surabhi then brought Indra to Krsna and prayed to Him, and Krsna was pleased.

Surabhi and Indra came forward with the water that the Indra’s elephant Airavata had brought from Mandakini Ganga – Ganga flowing in the heavenly planets – and they washed Krsna’s lotus feet with that water. Since then, the people there gave that place the name Govinda Kunda. Go means Veda, go means senses, go means gopi and go means cows. Gam-vindati means He who gives pleasure to all these. Because Krsna gives pleasure and nourishes all these, one of His names is Govinda.

If anyone takes part in the Govardhana-annukuta festival, and makes any preparation or even gives one grain, that person will never have to beg. Laksmi, the Goddess of Fortune herself, may have to beg, but that person will never have to beg. You can perform this worship even in your house. Today we are doing it here because I am here. But even when I am not here, you should do it on your own. You should perform Govardhana-annakuta during Kartika month on Annakuta day, on pratipada. Pratipada means the day after Dipavali, which is the day of Annakuta. First perform pujya (worship) of Gurudeva, then the Vaisnavas, brahamanas and cows. Then worship Govardhana, and then prasadam should be distributed. Then, krnsa-bhakti will come.

We don’t want anything from Sri Krsna, because He is Nanda-kumara, a very small boy. He cannot fulfill our desires. Rather, we should try to fulfill His desires. If you have any desires, try to go to Govardhana, for he will fulfill all your desires. Nanda Baba used to go to him, and even Krsna used to go. Govardhana-tattva (the transcendental truths regarding Giriraja Govardhana) is very high.