The Meaning of Radhe

[As an invocation to the tenth annual Holland Harikatha festival, Srila Maharaja requested the devotees to sing Srila Rupa Gosvami's prayer, "Sri Sri Radhika Pada-Padme Vijnapti." He then gave an elaborate explanation of the prayer:]

Radhe – what is the meaning of Radhe? "Aradyate iti." Sri Krsna Himself worships Srimati Radhika, and Radhika worships Him. When She came from Krsna's left side in the rasa-lila She at once ran to Him to worship Him – and He ran towards Her. "Radhe Jaya Jaya – Radhe, all glories to You, all glories to You."

"Madhava Dayite – You are very near and dear to Lord Madhava."

["Obeisances to the direction that faces Sri Vrsabhanu's daughter. When the breeze coming from that direction playfully moves the edge of Her garment, Lord Krsna, who cannot be attained by even the kings of the yogis, thinks that His life has now become a great success."]

Once, Sri Krsna did something that offended Srimati Radhika, and She entered a sulky mood. She was sitting on one side of Radha-kunda, and Krsna was on the other side in feelings of great separation from Her. The breeze coming from Radha's side touched the beautiful fragrance of Radha-kunda and also the veil of Radhika – not Radhika, but the veil which held Her fragrance. That breeze then touched Krsna and He exclaimed, "My life is successful! My life is successful!"

So many sages and saintly kings are able to control their minds, and their minds are thus purified. Yet, even in their meditation they cannot touch the lotus feet of Sri Krsna. On the other hand, by any connection with Radhika, by even the fragrance of Her veil, that same Krsna was overwhelmed. Radhika is so glorious.

["When will I delight in the service of Srimati Radharani? Struck by the arrow of Her side-long glance Krsna faints, His flute falls from His hands, the peacock feathers on His head become loosened and His yellow scarf slips from His neck."]

Srila Prabhodhananda Sarasvati writes: "When will I have a chance to serve Srimati Radhika with rasa – manjari-rasa – which is so high-class, even more so than the transcendental stages of sneha, maan, raga, anuraga and still more than that."

["Let Krsna, the Supreme Personality of Godhead, be glorified! By virtue of His expanding attractive features, He subjugated the gopis named Taraka and Pali and absorbed the minds of Syama and Lalita. He is the most attractive lover of Srimati Radharani and is the reservoir of pleasure for devotees in all transcendental mellows." (Caitanya-caritamrta Madhya-lila 8.142)]

When Sri Krsna plays His flute, all the gopis are controlled. He is an ocean of rasa. By His beauty and flute playing He controls Taraka, Pali, Candravali; and others such as Bhadra and Syamala and Lalita, are also controlled by Him. He also controls all the cows with His flute. Yet, when He saw Srimati Radhika, that flute fell from His hands and His peacock feather fell down to Her lotus feet.

"Brasdanca pita vasanam – He did not know that His yellow shawl was also falling down. He became totally mad and at once fainted." Srimati Radhika is so glorious, and therefore Srila Rupa Gosvami sings, "Radhe, Jaya Jaya Madhava Dayite."

["I am not able to repay My debt for your spotless service, even within a lifetime of Brahma. Your connection with Me is beyond reproach. You have worshiped Me, cutting off all domestic ties, which are difficult to break. Therefore please let your own glorious deeds be your compensation."] 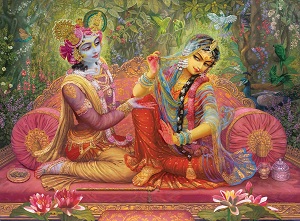 Sri Krsna is begging Srimati Radhika, "O Devi, I am taking My ears in My hand.*[See endnote 1] I have done something wrong. I promise that in the future I will never again commit any offense to You. Be pleased with Me. I am offering My flute and My peacock feather at Your feet. I cannot tolerate Your separation for even a moment. I will die without You. So please excuse My fault. Please excuse Me."

Sri Jayadeva Gosvami could not write this,*[See endnote 2] but our Gosvamis, like Srila Rupa Gosvami, who is Sri Rupa Manjari, could do so. How glorious is Radha. "Jaya Jaya Madhava Dayite – Sri Krsna is controlled by Srimati Radhika."

"Damodara rati vardhana-vese – Damodara is controlled by His mother, but in this connection that very Damodara is now controlled by Radhika. Vardana vese – to increase Sri Krsna's love and affection, She appears in beautiful ways."

"Hari-niskuta vrndavipinese" – Hari refers to Krsna who takes the heart of everyone, especially the gopis. His garden is Vrndavana, where Yamuna is flowing, peacocks are dancing and cuckoos are singing. Everywhere there are beli, cameli, and kadamba flowers. All stimuli are fully present. There, Krsna is not Vrndavanesvara (the Lord and controller of Vrndavana). Because Vrnda has given Vrndavana to Srimati Radhika – She is Vrndavanesvari. Especially, Sri Krsna is not Rasesvara (the Lord and controller of rasa-lila); rather, Radhika is Rasesvari. Sri Krsna is one of the participants, but Radhika is all-in-all.

"Jaya Jaya – O Devi, be glorious, be glorious [meaning be victorious – "Please take victory over my lust, greed, etc., and make me Yours." (adapted from Srila Narayana Gosvami Maharaja's Gopi-gita verse 1 commentary)] Sprinkle a particle of Your mercy upon me."

"You are like the moon that has arisen from the ocean of Vrsabhanu Maharaja's love. [According to Srimad-Bhagavatam, the moon was born from the churning of the ocean.]

"Lalita sakhi guna-ramita-visakhe – You are the sakhi of Lalita." In what way?

["I offer pranama unto Sri Lalita-devi, the charming treasure-house of all good qualities, who instructs Srimati Radhika in this way: "O Kalankini (unchaste one)! Radhe! Listen to my good instructions which are favorable for you! Vrajendra-nandana is very crafty (dhurta). Don't display Your mood of gentle submission (daksina bhava) to Him; instead, in all circumstances be contrary."]

Srimati Lalita-devi is so near and dear to Srimati Radhika that sometimes she controls Radhika. "Dhurte vrajendra – Lalita says, 'Vrajendra-nandana (Sri Krsna, the son of Nanda Maharaja) is a high class of cheater. He is black inside and He is black outside. He is black everywhere; so don't be submissive towards Him. Always act in such way as to control Him. Don't give up Your maan (transcendental loving anger).'" Radhika wants to give up Her maan, but Lalita tells Her not to do so. "Radhe giram srnu hitam iti siksayantim" – Lalita is guru of Radhika, and therefore She can give anyone the dasya-prema of Radhika.

["I offer pranama unto the supremely charming Sri Lalita-devi, the treasure-house of all good qualities. Upon seeing any young maiden anywhere in Vraja and discerning that she is inclined towards her priya-sakhi Srimati Radhika, Lalita immediately tells Radha that She must accept this person in Her own party (sva-paksa). Radha obeys Lalita, who thus fulfills that maiden's desires." (Sri Lalitastakam, verse 7)]

Visakha took birth on the same day that Radhika took birth, so her beauty and other qualities are similar to Radhika's. Her voice is so sweet, even more so than Sri Krsna's. All her qualities are like Radhika's. I pray that she will make me her disciple and give me training on how to serve Radhika and Krsna.

In this verse Srila Rupa Gosvami says that even those who are first-class brahmavadis, like Sukadeva Gosvami (when he first appeared in this would) and the four Kumaras (who are forever five years old, who are always naked, and who are the first sons of Lord Brahma) are glorifying Srimati Radhika. Nisanta-lila (the end-of-night pastimes of Radha and Krsna) and other pastimes of asta-kaliya-lila (the 24-hour daily pastimes of Radha and Krsna) were told to the four Kumaras by Lord Siva, and then they wrote about it in the Brhat-vamana Purana. So Srila Rupa Gosvami is glorifying Sanaka, Sananda, Sanat, and Sanatana Kumara.

In this connection, Sanatana means Sanatana of the four Kumaras. But Srila Sanatana Gosvami has also glorified Her, especially in Brhad-bhagavatamrta and in his Vaisnava Tosani commentary of Srimad-Bhagavatam.

And we are now also glorifying Radhika, so that this Holland festival will be successful. More than 1,000 devotees have come here from various parts of Europe, Australia, England, Russia, and various other countries. There may be some problems. No one can satisfy everyone, and especially it is not possible to satisfy a child. If some problem comes, therefore, with hosting or prasadam or anything else – it may come – please tolerate.

You have all come for hari-katha, and we will give you hari-katha. We will give that hari-katha which Srila Bhaktivedenta Svami Maharaja, your Prabhupada, has left for me. He told me, "You should give this."

Try to drink the nectar of hari-katha with the two cups of your ears. Srila Sukadeva Gosvami has told about this, but not openly like I am telling. Sukadeva Gosvami has never openly told Radhika's name in the Srimad-Bhagavatam, nor did he reveal the names of Candravali or Lalita and Visakha. But Srila Bhaktivinoda Thakura has revealed this, and in his parampara I am also telling you so many secret names and sweet pastimes. Try to take this into your heart, and preach our mission throughout the world. Don't be weak. "Radhe Jaya Jaya Madhava Dayite."

*[endnote 2 – Jayadeva Gosvami was somewhat hesitant to write the entire verse, because he had a hint of an opulence mood toward Sri Krsna. So, while he was out of his house, Krsna Himself, in the form of Jayadeva, came to his house and wrote the rest of the verse in his devotee's notebook.]