If Rupa Gosvami Had Not Come 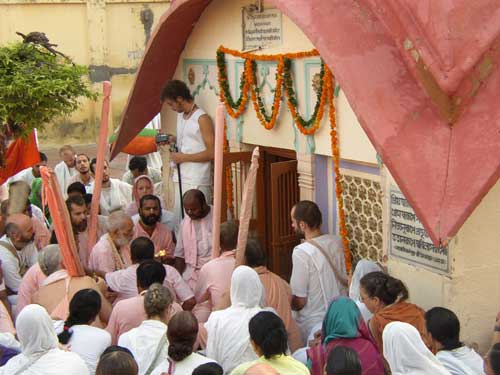 [The Krsna consciousness movement is conducted under the supervision of Srila Rupa Gosvami.  The following is a discourse a in honor of his disappearance day, spoken in front of his samadhi at the Radha-Damodara Mandira, in Vrndavana, India, on August 17, 2005.]

Today we are very fortunate to be at the bhajana-sthali and samadhi-sthali (sthali means place) of Srila Rupa Gosvami, here at Sri Radha-Damodara Temple.

Srila Rupa Gosvami is the life of the Gaudiya Vaisnavas. He is the crest-jewel of the rasika-bhaktas (devotees who taste transcendental mellows) and it is he alone who fulfills the mano-bhistham, the heartfelt desire, of Sri Caitanya Mahaprabhu. We have performed our worship of Srila Rupa Gosvami, and we pray to his lotus feet that his conceptions may manifest in our heart. We pray that the manner in which he served Sri Gauranga Mahaprabhu and Sri Sri Radha-Krsna may also manifest in our heart. 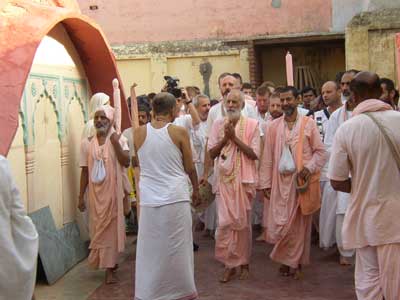 If Srila Rupa Gosvami had not come to this world, the flood of mercy created by Sri Caitanya Mahaprabhu – the gift of service to Srimati Radhika – would have stopped when the Lord disappeared. Sri Krsna came to this world as Sri Caitanya Mahaprabhu for two reasons. The first reason was to taste His three unfulfilled desires. The second reason was to distribute to the world raga-marga, the path of spontaneous devotion by following in the wake of Sri Krsna's Vrndavana associates, and especially to distribute the service of Srimati Radhika. For this purpose, Sriman Mahaprabhu manifested Himself in the heart of Sri Rupa Gosvami and inspired him to write all his transcendental literatures, especially Vidagdha-madhava, and later Ujjvala Nilamani and Bhakti-rasamrta Sindhu.

Some time after Sri Caitanya Mahaprabhu’s departed from this world, people hated parakiya-rasa (the paramour love of Radha-Krsna and the gopis). They had a bad idea about it. Even other sampradayas, like the Sri (Laxmi) Sampradaya of Srila Ramanujacarya and also the Nimbarka sampradaya, were against the worship of Radha-Krsna to such a degree that they separated the Deity of Radha from the Deity of Govinda in Jaipur.

Srila Rupa Gosvami established the true conception of Sri Caitanya Mahaprabhu, by his books. He especially used the Srimad-Bhagavatam as evidence to establish that parakiya-rasa is not only bona fide, but it is the highest devotion. He established this truth in such a strong way that all the other sampradayas had to bow their heads and accept it.

What would have happened if Srila Rupa Gosvami had not appeared in this world? The Vraja-prema – the prema of the dasya, sakhya, vatsalya, and especially the prema of the gopis – was contained in a storehouse. There are so many types of gopi-bhava, namely sneha, maan, pranaya, raga, anuraga, bhava, and mahabhava. All these definitions were given by Srila Rupa Gosvamipada.

The paribhasa sutra, meaning the ‘defining ahorism’ of Srimad-Bhagavatam contains its essence:

Srila Rupa Gosvami explained that sadhana is only sadhana when our goal is the attainment of bhava-bhakti. Then it can be called sadhana-bhakti, otherwise not. Otherwise one’s practice is called sadhana-abhasa (a shadow or semblance of devotional practice). Rupa Gosvami gave us the definitions of prema and he showed the entire world the nature of Srimati Radharani's attraction to Krsna. He showed the world how we can be attracted to Radha and Krsna. He taught the identity of Radha-Krsna, and also of Sri Caitanya Mahaprabhu:

["May the Supreme Lord who is known as the son of Srimati Saci-devi be transcendentally situated in the innermost chambers of your heart. Resplendent with the radiance of molten gold, He has appeared in the Age of Kali by His causeless mercy to bestow what no incarnation has ever offered before: the most sublime and radiant mellow of devotional service, the mellow of conjugal love." (Sri Caitanya Caritamrta, Adi-lila 1.4 quoting Sri Vidagdha Madhava 1.2)]

Who is Sri Caitanya Mahaprabhu? Radha-bhava-dyuti-suvalitam naumi krsna-svarupam. He is Sri Krsna, covered by the complexion and the bhava of Srimati Radhika. He came to distribute Her service in this world. Who described the identity of Caitanya Mahaprabhu? Sarvabhauma Bhattacarya did not, and Sri Ramananda Raya did not. All knew, but when Sri Ramananda Raya began to explain His identity, Mahaprabhu covered his mouth. Only Rupa Gosvami could completely describe it. All others were checked, but Rupa Gosvami could not be checked. Mahaprabhu chose him to reveal Himself to this world.

Mahaprabhu also chose him to distribute the service of Srimati Radhika to the world. Rupa Gosvami had a special mood, and those who follow in his footsteps are called rupanugas. All rupanugas are raganugas, but not all followers of the path of raganuga-bhakti are rupanugas.

["If Srila Rupa Gosvami had not appeared in Kali-yuga, who would have opened the great store-house of vraja-prema and distributed its contents freely? Just as a swan separates milk from water, who else could have separated the rasas to taste them? Abandoning everything, he performed bhajana in Vrndavana and wrote his rasika literatures. He lived like a bee taking the nectar of lotuses. Who could have understood the nectar he was collecting? Who could have understood Krsna's pastimes in Mathura and Vrndavana? How could we have known the sweet vraja-lilas and the love between Radha and Madhava (another name of Sri Krsna, meaning the husband or beloved of the supreme goddess of fortune)? By the mercy of his lotus feet, all can sing about and attain such divine bliss. The surrendered Madhava dasa is always praying to embrace Sri Rupa's glories." (Yan Kali Rupa Sarira Na Dharata, by Sri Madhava dasa)]

The kirtana "Yan Kali Rupa Sarira Na Dharata" by Sri Madhava dasa states: "Just as a swan separates milk from water, in the same way Srila Rupa Gosvami separated the milk of suddha-bhakti (pure devotion) from the water of all different types of mixed bhakti.

Srila Rupa Gosvami left everything – all his family members, his position, his disciples, and so on. He came alone to Vrndavana. Here, at Sri Radha-Damodara Mandira, he completed most of his books.

He began to write a drama describing the pastimes of Krsna, but on the way to Jagannatha Puri, at Sri Satyabhama Pura, Srimati Satyabhama devi (Sri Krsna’s queen in Dvaraka) appeared in his dream and said, "Oh Rupa, you should write a separate drama about me." Afterwards, in Puri, Mahaprabhu said to him, "Don't take Krsna out of Vrndavana. You should write two dramas – Vidagdha-Madhava and Lalita-Madhava." 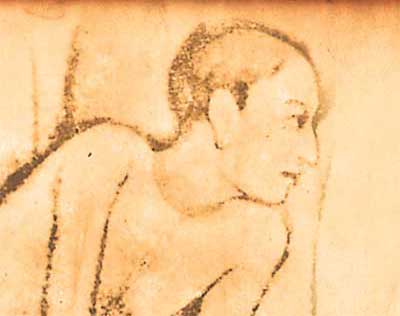 He wrote and compiled more than thirty books, such as Hamsa-duta, Uddhava Sandesa, and many others, and most were completed here at the Radha-Damodara temple.

There may be many different types of flowers, such as beli, cameli, lotus, and so on, but unless there is a bee present, who can understand the nectar contained within those flowers? In the daytime, the bee goes to the lotus flowers. At night that lotus closes with the bee within it. That same bee, who is able to cut his way even through bamboo, cannot escape from the petals of the lotus. In the same way, all the gopis have very fragrant moods in their service to Krsna, but unless the bee is there, how can we understand their fragrance? As the bee is trapped by the lotus flower, the bee-like Krsna is trapped by the prema of the gopis. He is completely bound.

The words "ko janata, mathura vrndavana" are significant in this song. Without the mercy of Srila Rupa Gosvami, who would be able to understand what is Mathura and what is Vrndavana? Mathura is the place of aisvarya-mayi bhakti (devotion in the mood of opulence and reverence), and Vrndavana is the place of madhurya-mayi bhakti (devotion in the mood of sweetness and spontaneous service). Mathura and Vrndavana are so close, but no one from Mathura visits Vrndavana, and no one from Vrndavana visits Mathura. This is because, even though they are close in geography, they are very far in mood. This was all shown by the evidence of Srimati Radhika, who never went to Mathura.

"Ko janata vraja-nita." Without Srila Rupa Gosvami, who could understand the mood of Vrndavana or the behavior of the Vrajavasis? Without him, how could we have understood the attachment of Radhika and Madhava for each other? Srimati Radhika uses apparently very abusive language toward Krsna, but Her prema is actually millions of times greater than anyone else’s. Her prema is greater than the sadharana-rati of Kubja. Her prema is greater than the samanjasa-rati of the queens of Dvaraka. The prema of Radharani and the gopis of Vrndavana is called samartha-rati. Samartha means that they can do anything for Krsna, and therefore only their prema can completely satisfy and control Him. Without the mercy of Rupa Gosvami, who could understand that Krsna is only bound by Srimati Radhika?

Srila Visvanatha Cakravarti Thakura has written Prema-Samput. There he describes how Krsna disguised Himself as a demigoddess called Syama-sakhi. In a disguised form He went to Radharani and asked: "Oh Radharani, how can You love Krsna?! We saw what He did to You! He called all the gopis during rasa-lila and left them for You, and later on He left You alone. He is a very cruel. How could You have developed affection for Him?"

Radhika replied, "Oh, you don't know what prema is."

[*Endnote:
Maan – that stage of prema in which sneha reaches exultation, thus causing one to experience the sweetness of the beloved in ever new varieties (Ujjvala-nilamani 14.96), and when the nayika assumes an outward demeanor of pique which turns into transcendental anger and indignation arising out of jealous love.

Raga – 1) an intensified stage of prema in which an unquenchable loving thirst (prema-mayi trsna) for the object of one's affection (Sri Krsna) gives rise to spontaneous and intense absorption in one's beloved, so much so that in the absence of the opportunity to please the beloved, one is on the verge of giving up his life; 2) when pranaya is experienced in the heart as immense pleasure. If by accepting some misery there is a chance to meet with Krsna, then that misery becomes a source of great happiness. And where happiness affords no opportunity to meet with Krsna, that happiness becomes the source of great distress.

Anuraga – an intensified stage of prema as defined in Ujjvala-nilamani (14.146): "Although one regularly meets with and is well-acquainted with the beloved, the ever-fresh sentiment of intense attachment causes the beloved to be newly experienced at every moment, as if one has never before had any experience of such a person."

Bhava – 1) loving emotions; a particular mood of love in which the devotee serves Krsna. 2) an intensified stage of prema which in Ujjvala-nilamani has been equated with maha-bhava, which occurs when anuraga attains a certain stage of exhilaration and relish. This can be experienced and relished only by anuraga itself and by no other bhava. When anuraga is adorned with the inflamed and exciting sattvika passions like molten gold and reaches its climax in Srimati Radhika, becoming identical with Her very temperament and dispositions, it is called bhava.

Mahabhava – the most mature stage of prema.