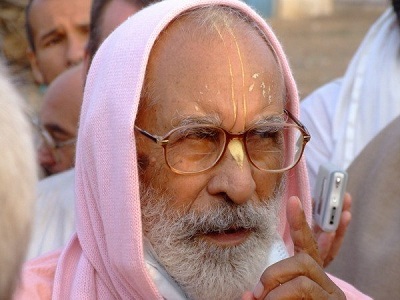 [The following is a translation of Srila Narayana Gosvami Maharaja's discourse on service to Sri Guru given in Govardhana, on September 4, 2005:]

Radhe Syama prabhu spoke very nicely about the qualities of a Vaisnava. I want to see everyone become established in these Vaisnava qualities. Simply speaking about them is not enough.

It is very important that we don't focus on anyone's faults. Look at their good qualities. We have to absorb these qualities in ourselves. We must take the association of Vaisnavas who are superior to us and who have the mood we want. Then we can attain bhakti.

Someone who has no nistha (strong faith) in his Guru and in the Vaisnavas, no attachment for them, no attachment for their service, and who doesn't take any responsibility to do seva – such a person is like an animal with two legs. Taking responsibility can even make an animal into a human. Stay in the Mathas (temples) under the guidance of Guru and Vaisnava. Respect them and serve them with strong faith and attachment.

Devotees must take responsibility for service. Wherever Gurudeva sends a disciple, he should do that service with a sense of responsibility.

Gurudeva sent me to Mathura, and I accepted all the responsibilities of the Matha – including fighting in the court, preaching, doing kirtana, cooking, going house to house and preaching, writing books, publishing Bhagavat Patrika (monthly magazine). I took all this upon my head. This was my area of responsibility for Gurudeva.

Taking your own life in your hand, perform guru-seva. Bhakti is not easily attained. Valmiki performed severe austerities for 60,000 years and received the fruit of devotion to Lord Rama. How he served his Guru, Sri Narada, and followed his instructions! Narada told him to sit in one place and engage in harinama (chanting the name of Lord Rama). He sat down for 60,000 years and did not get up. He did not eat or drink, or even go to latrine. He did nothing but chant. Ants gradually built an anthill around him and covered his entire body, and his life airs stayed in his bones. This is guru-seva.

Ekalabhya was only an ordinary person, but he gave his thumb to his Guru. His fault was that he didn't follow his Gurudeva properly, but he did give his thumb when it was requested.

Even Lord Krsna carried a bundle of wood on His head for His Guru. He stood in the rain the entire night and got completely wet in the service of His Guru, and He is God Himself. This is how to do guru-seva.

In the Upanisads we find the history of Upamanyu. His Guru told him to take the cows out grazing. After some time his Guru asked him, "Why are you so fat and healthy?" He replied, "After the calves take their milk, I drink the remaining milk." His Guru said, "Don't drink the milk," but he did not tell Upamanyu what he could take. Some days passed, and when he saw Upamanyu, again he said, "How is it that you are still so fat and healthy? What are you eating?" Upamanyu answered, "I take the foam of the milk left in the calves' mouths." Again his Guru said, "Don't do that." Now all roads were closed. So what did he do? He saw some leaves with a white liquid coming out of them, and started taking that 'milk.' He became blind from that poisonous white liquid, and he fell in a well.

Gurudeva came looking for him, calling out, "Where are you?" He called back, "I am in this well." "What happened?" Gurudeva asked. Upamanyu replied, "I was taking this milk from the leaves, not realizing it to be poison. I became blind and fell down in this well." Gurudeva said, "You will get your eyesight back, and all Vedic knowledge will be at once be revealed in your heart."

In the Upanisads and other Vedas, such examples of guru-seva are given.

[Only unto those great souls who have implicit faith in both the Lord and the spiritual master are all the imports of Vedic knowledge automatically revealed. (Svetasvatara Upanisad 6.23)]

We should be like such disciples. Bhakti is not easy. Bhakti will not come simply by saying the word 'bhakti.' Moreover, in the line of Sri Caitanya Mahaprabhu, vraja-bhakti, gopi-bhakti, is very, very difficult to attain.

You are very fortunate to have come here. Keep your good fortune by developing strong faith in Guru, by performing devotional services under his guidance with commitment, and by following his instructions nicely – even if you have to go to hell. Go to hell with a contract. In other words, wherever you are sent – it may even be to hell – you will have your commitment to Gurudeva always with you, and you will execute it. Take Guru's instructions to heart, and then you will get bhakti; otherwise it is not possible.