Don't Hear From Them 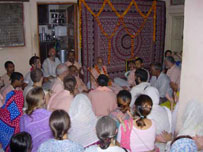 [Respected Readers,
Please accept our humble obeisances. Since October 11th, 2005, Srila Narayana Maharaja has been giving evening lectures on the small book, Prema Samput, by Srila Visvanatha Cakravarti Thakura. He has just completed its translation from Bengali to Hindi, and expects to publish it during Kartika. Prema Samput is a conversation between Lord Sri Krsna, disguised as a demigoddess, and Srimati Radhika. In that conversation Srimati Radhika reveals to Krsna, whom she does not recognize, about Her exalted and supremely pure love for Him. In the middle of his October 14th, 2005 class, Srila Narayana Maharaja made some points about guru-seva, as a loving warning to his followers. The following is a transcription of that short section, spoken sometimes in English and sometimes in Hindi. He called on Sripad Damodara Maharaja to translate the Hindi-parts:]

Srimati Radharani is prema-samput, the treasure-chest of love, and She is revealing Her heart to us by describing what is prema. Our guru-parampara has very mercifully collected all this, and they have opened their realizations to us. If any of us can get one drop of this mood, our lives will be successful.

So-called learned persons and scholars have doubt in Guru. Even if Guru is real – even if he is sad-guru (self-realized) – still they are disobeying him. They have some doubt in him and they can even give up their renounced order of sannyasa.

Still I speak harikatha, so that it may be understood by the one person, or half a person, who is qualified to hear. I am speaking about the symptoms of the high class of love and affection of Srimati Radhika. Try to hear and be like that.

I have heard the following history from my Gurudeva, Srila Bhakti Prajnana Kesava Gosvami Maharaja:

When Sri Sankaracarya was living in Badrika-asrama, he was often surrounded by his many learned disciples, amongst whom five were very prominent. He also had a disciple named Giri. Everybody considered Giri very foolish, for he was not scholarly like them. He only engaged himself in different types of menial guru-seva.

One day Sri Sankaracarya was ready to give hari-katha, and all the learned disciples were there waiting. Again and again they asked, “Gurudeva, you must speak. We are all present here except for that foolish Giri; but he doesn't understand anything anyway.” At that time Giri was across the river, washing the clothing of Sri Sankaracarya and waiting for them to dry. At that time, the river’s current was so strong that it could sweep away an elephant. Again and again the disciples asked, “Gurudeva, who are you waiting for? Please start.” But Sankaracarya was silent.

Meanwhile Giri had dried and folded the cloth. He ran across the river and arrived before his Gurudeva. During those days Sri Sankaracarya had been speaking on a very difficult section of Vedanta. Giri sat down and began to recite his own verses glorifying his Gurudeva. His glorification was so high, with such ornamented language, that many of the others could not understand his words. Sri Sankaracarya then said that this was the result of guru-seva.

We are unable to do this, but still we are hearing so many high topics in glorification of Srimati Radhika. Many learned disciples have come and gone – millions. They saw some fault in their bona-fide, self-realized Guru, thinking, “Gurudeva doesn’t know so much.” Therefore, despite being so-called learned persons, some of them have even given up the sannyasa asrama and the path of pure bhakti. Therefore, visrambhena guru-seva is so important.

Those people cannot tell hari-katha. Those disciples who no longer have faith in the words of their Guru are totally unqualified to speak any hari-katha. How can they say anything? They want to speak about the elevated love and affection of Srimati Radhika, but they have no guru-bhakti. I think it will be better to not hear even a word from them – if you really want bhakti. Don't try to listen to their hari-katha, because they have so many doubts and they no longer follow their Gurudeva. Those persons are not qualified to tell any hari-katha.