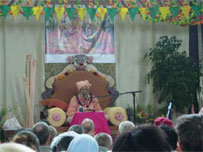 [ The week-long Harikatha Festival in Germany – April 3-9, 2006 – was attended by about 600 devotees from around the world. During that week, Srila Narayana Maharaja spoke in the temple room each evening. On the first night he discussed the first canto Srimad-Bhagavatam, and on the subsequent nights he discussed the five kinds of pure devotees as described in Srila Sanatana Gosvami's Brhat-bhagavatamrtam. He discussed the glories of Sri Prahlada Maharaja, Ambarisa Maharaja, Hanuman, the Pandavas, and finally the glories of Sri Uddhava and the gopis. At the end of his final class he spoke the following closing words:] 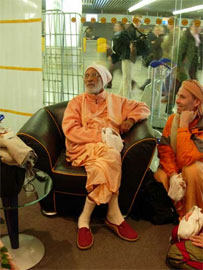 Depend on Sri Krsna. At least develop saranagati, practicing the six types of surrender – always consider that Sri Krsna is your protector. No other person can protect you. Depend on Krsna, not anyone else. Be like Gangamata Thakurani* [See endnote 1], whose life history we saw in the drama last night, and thus make your lives successful.

Don't be weak. Don’t give up chanting. Remember your guru-mantra and gayatri mantras daily – three times a day. Don't take alcohol or marijuana or things like that. Be strict. Always remember to read my books and the books of Srila Bhaktivedanta Swami Maharaja, and try to understand them. Hear hari-katha from superiors. Don't criticize any Vaisnava. If you don't like someone, don't associate with him; but don’t criticize him. Always be strong.

Also, distribute my books. Read, take the essence, follow, and distribute my mission. My mission is not different from that of Srila Rupa Gosvami or Sri Caitanya Mahaprabhu. You should help me in preaching all over the world – as Mahaprabhu’s mission was preached at the time of Srila Bhaktivedanta Swami Maharaja. At that time all the devotees used to go to airports, railway stations, shop to shop and door to door to preach His mission; and thus it spread all over the world. Again you should inspire all – but first inspire yourselves.

My heartly blessings to all the devotees – to the audience. If there was no audience, to whom would I speak hari-katha? I want you to be strong, and preach my mission throughout the world.

[Endnote 1: The following is a lecture given by Srila Narayana Maharaja on the subject of Srimati Gangamata gosvamini, in January of 2000, in Murwillumbah, Australia. It was this lecture that was used as the script for the drama referred to above:
The Glories of Srimati Gangamata Gosvamini