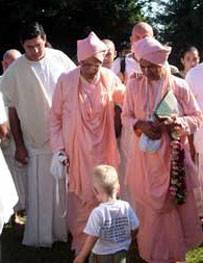 [Srila Narayana spent a week in Badger, California, from June 12-19, to preside over the eleventh annual Harikatha festival there. Each year in Badger he picks and important theme from our Vaisnava scriptures, and this year he decided to speak on some of the vital teachings in the Eleventh Canto Srimad-Bhagavatam. June 13th was his first class on the subject.]

I am happy that you have assembled here, to hear hari-katha. Keep all this hari-katha in your heart, forever.

["Simply by giving aural reception to this Vedic literature (Srimad-Bhagavatam), the feeling for loving devotional service to Lord Krsna, the Supreme Personality of Godhead, sprouts up at once to extinguish the fire of lamentation, illusion and fearfulness." (Srimad-Bhagavatam 1.7.7)]

If anyone will hear Srimad-Bhagavatam with strong faith and great honor, Lord Sri Krsna will be pleased with him and give him bhakti. That devotee will no longer experience lamentation (soka), illusion (moha), or fear (bhaya) from anything. He will cross over the cycle of birth and death forever. Therefore, Srila Vyasadeva has kindly manifested the Srimad-Bhagavatam.

We have discussed up to the 9th Canto. We see in the 5th Canto of Srimad-Bhagavatam, how Bharata Maharaja left his household life as one leaves stool after passing it. He left his wife, kingdom, wealth, reputation and everything he possessed, but later he became entangled with a deer and lost three lives. At that time he was at the stage of bhava, and after three births he was again able to progress in his bhakti. For us, however, if we fall down, we may never come out of that fallen predicament.

Then, in the 9th Canto, Srimad-Bhagavatam discusses the glories of Rama-lila – the sweet pastimes of Lord Sri Rama, and after that its author, Srila Vyasadeva, came to the 10th Canto. In the 10th Canto there are three kinds of pastimes of Lord Krsna – balya-lila (baby pastimes), kaumara-lila (childhood pastimes) and kishora-lila (pastimes in youth). In balya-lila Krsna liberated the demons Putana, Trnavarta, Sakatasura and others. These are very interesting hari-kathas. After that, although Sri Krsna is the Supreme Lord, very powerful, full with six opulences, unlimited and omnipresent, still, Mother Yasoda bound Him by her love and affection and chastised Him. She made that Supreme Lord weep, and weep and weep. This is very wonderful.

After that, Lord Krsna and His family moved to Vrndavana, where He liberated Dhenukasura, Vatsasura, Aghasura, Bakasura, Sankacuda, Kesi, Byomasura and so many other demons. Why?

["Whenever and wherever there is a decline in religious practice, O descendant of Bharata, and a predominant rise of irreligion – at that time I descend Myself. (Bhagavad-gita 4.7)]

Lord Krsna came to establish religious principles and to liberate demons. These demons were the burden of the Earth, and He removed that burden. He went to Mathura, and there He defeated Kamsa, Carana, Mustika and all others like them. He defeated Jarasandha eighteen times, even though Jarasandha had so many aksauhini [A solid phalanx of 21,870 chariots, 21,870 elephants, 109,650 infantry and 65,600 cavalry is called an aksauhini.] soldiers – more soldiers than in the Mahabharata, and a great weight of the Earth was thus removed. Then, through Mucakunda, Krsna killed Kalyavana. Sri Krsna is the Supreme Lord and very powerful, but He could not kill the great demon Jarasandha personally (because Jarasandha had received a boon that he could not be killed by anyone from the Yadu dynasty). Jarasandha was therefore killed by Him through the hands of Bhima.

Then, in the Mahabharata Battle, eighteen aksauhini divisions were destroyed, and so much weight of the Earth was relieved. After that Lord Krsna defeated Rukma, Sisupala and Dantavakra, and Pundarika Vasudeva. Pundarika Vasudeva had made two artificial hands, imitating Vasudeva Krsna. He carried some paraphernalia and told Krsna, "Oh Krsna, do not cheat others. I am Vasudeva Krsna. If you want to challenge my words, then be ready to fight." Krsna began to laugh and said, "Yes, you are really Vasudeva Krsna." Krsna then defeated him and also his ally, the king of Kasi, who was also a demon.After that Krsna was thinking, "Still, our Yadu dynasty is there, and that dynasty of the Yadus is very powerful. If I ascend to Goloka Vrndavana, the members of our dynasty may create many problems – so they are also a great burden of the Earth. How shall I remove them?" He then inspired something in the hearts of the yogis and rsis like Durvasa and others.

I forgot to mention that after rasa-lila Lord Sri Krsna went to Dvaraka and married His eight prominent queens, such as Rukmini and Satyabhama, and He also married 16,000 other princesses. He liberated many kings from the jail of Narakasura. Narakasura wanted to marry those princesses, but Krsna killed him and married them, and they all became His queens in Dvaraka. After that He began thinking about the prayer He had heard from Brahma and Sankara: "You have come to this world for a certain reason, and now everything has been accomplished by You. Now we request that You return to Goloka Vrndavana. We also pray on the way You will come to Brahma-loka." Krsna accepted their prayer, and that is why He inspired Durvasa to give that curse.

The event leading up to the curse is as follows: Sri Krsna's son Samba was very beautiful. The young princes of the Yadu dynasty decorated Samba as a beautiful lady, and put cloth and other things under his sari to make him look pregnant. Samba and the other princes then approached Narada, Durvasa and other Rsis, and one of them said, "Oh, she is very shy and cannot ask herself. She wants to know whether it will be a son or daughter who will come from her womb." After the boys asked this three times, Durvasa became angry and said, "There will be no son or daughter – it will be a club, and by that club the entire Yadu dynasty will be finished." Out of fear, the princes did not tell Lord Krsna about this incident; they told Ugrasena. Krsna knew what had transpired, however, and He saw that so many inauspicious things were about to happen. He saw such evil omens as blood raining from the sky, winds blowing, and elephants and dogs weeping.
He told the leaders of the Yadu dynasty, "We are seeing evil omens. We should go to Prabhasa-tirtha, to counteract the sinful reactions." *[See endnote 1]

Krsna and His family members went to Prabhasa-tirtha and began to donate so many things to please the brahmanas. He began to perform fire sacrifices, and in the fire sacrifice the young Yadus took a kind of rice-wine and became intoxicated. They all began to fight with one another. When their weapons were broken they took sharp bamboo which were as hard as thunderbolts, and they fought with those and killed each other.

Why did this happen? Krsna wanted to go to Goloka Vrndavana and He wanted His associates to return to their abodes (planets). He therefore created something like a magic show. By His yogamaya potency it appeared that His associates killed each other, but that is not what happened. Those who came from Goloka Vrndavana, from Vaikuntha and from the heavenly planets all went back to their abodes. Some went to Svarga-loka (the heavenly planets), some to Vaikuntha and many others to Goloka Vrndavana. The queens on the members of the Yadu dynasty also returned. It was assumed that they had burned with their husbands in the sati-rites, but they did not.

Srila Visvanatha Cakravarti Thakura has written a history in his commentary, about a magician and his family. The magician performed a magic show for the king and his associates. The wife of the magician climbed on a high rope, and she carried many pitchers of water as she danced on the rope. The Queen and King became happy, and they gave a very expensive necklace to that lady. The two young sons of the lady then began to fight over the necklace. The mother left the necklace with them, and they continued to fight over it.

The boys were equal in strength. As they fought together, they each took a sword and cut off each other's heads. The father cried out, "Oh, my sons are dead!" The wife rushed towards them at once, full of sorrow, and she immediately cut off her own head. Her husband was so aggrieved that he also cut off his own head.

The King and Queen became very unhappy. They performed the funeral rites and returned to their palace. In the morning a letter came to them: "Maharaja, you gave us a present for dancing on the rope, but you did not give a present for our second performance. We are not dead. We are waiting for our reward. Oh, if you have no faith, you can come and see that we are alive."

The Queen and King became very happy. They went to the magician's home with their associates and with garlands. They saw that the members of the magician family were waiting for them, ready to welcome them.

Lord Sri Krsna performed His miracles as well, for He is the magician of magicians. In this way, He took all His associates to the heavenly planets, Vaikuntha and Goloka Vrndavana.

[Question:] You said that when Krsna's relatives killed each other it was like a magic show. But why would Krsna think that His pure devotee associates would create chaos after He would leave the world?

[Srila Narayana Maharaja:] In the Yadu dynasty, Pradyumna and Aniriuddha are manifestations and associates of Sri Krsna, but some others were demigods. They might do some nonsense activities; so He did this for them.

[*Endnote 1 –]  Krsna told the members of the Yadu dynasty:
"The women, children and old men should leave this city and go to Sankhoddhara. We shall go to Prabhasa-ksetra, where the river Sarasvati flows toward the west. (Srimad-Bhagavatam 11.30.7)

"There we should bathe for purification, fast, and fix our minds in meditation. We should then worship the demigods by bathing their images, anointing them with sandalwood pulp, and presenting them various offerings. (Srimad-Bhagavatam 11.30.8)

"After performing the expiatory rituals with the help of greatly fortunate brahmanas, we will worship those brahmanas by offering them cows, land, gold, clothing, elephants, horses, chariots and dwelling places. (Srimad-Bhagavatam 11.30.9)

"This is indeed the appropriate process for counteracting our imminent adversity, and it is sure to bring about the highest good fortune. Such worship of the demigods, brahmanas and cows can earn the highest birth for all living entities."

Having heard these words from Lord Krsna, the enemy of Madhu, the elders of the Yadu dynasty gave their assent, saying, “So be it.” After crossing over the ocean in boats, they proceeded on chariots to Prabhasa.

Then, their intelligence covered by Providence, they liberally indulged in drinking the sweet maireya beverage, which can completely intoxicate the mind. (Srimad-Bhagavatam 11.30.12)

The heroes of the Yadu dynasty became intoxicated from their extravagant drinking and began to feel arrogant. When they were thus bewildered by the personal potency of Lord Krsna, a terrible quarrel arose among them. (Srimad-Bhagavatam 11.30.13)

Infuriated, they seized their bows and arrows, swords, bhallas, clubs, lances and spears and attacked one another on the shore of the ocean. (Srimad-Bhagavatam 11.30.14)