[Srila Narayana Maharaja:] Even if a disciple is born of an aristocratic family, he should be humble. He should wake up in the morning before his Gurudeva, and take rest after him. He should always serve and obey his Guru. He should never disobey.

[Question:] He's asking if the Guru has attachment to his disciples.

[Srila Narayana Maharaja:] The Guru has no attachment to anyone, but he is merciful. He is only attached to Sri Sri Radha and Krsna. He has no lust for anything in this world. He has no time at all for anything or anyone else.

["Accepting the bona fide spiritual master as one's life and soul and worshipable deity, the disciple should learn from him the process of pure devotional service. The Supreme Personality of Godhead, Hari, the soul of all souls, is inclined to give Himself to His pure devotees. Therefore, the disciple should learn from the spiritual master to serve the Lord without duplicity and in such a faithful and favorable way that the Supreme Lord, being satisfied, will offer Himself to the faithful disciple." (Srimad-Bhagavatam 11.3.22)]

[" A sincere disciple should learn to dissociate the mind from everything material, and positively cultivate association with his spiritual master and other saintly devotees. He should be merciful to those in an inferior position to him, cultivate friendship with those on an equal level and meekly serve those in a higher spiritual position. Thus he should learn to deal properly with all living beings. (Srimad-Bhagavatam 11.3.23)]

When we meet others we should not speak about our sufferings: "My wife has divorced me. What should I do?" When Srila Rupa and Sanatana Gosvamis used to meet together, they would only speak about Krsna. A disciple should learn this from his Guru. Disciples should remind each other of the sweet pastimes of Krsna, so that maya will not be able to enter their hearts - otherwise maya will come. The disciple should learn from his Gurudeva how Krsna-prema can be achieved.

["Having achieved love of Godhead, the devotees sometimes cry out loud, absorbed in thought of the infallible Lord. Sometimes they laugh, feel great pleasure, speak out loud to the Lord, and dance or sing. Such devotees, having transcended material, conditioned life, sometimes imitate the unborn Supreme by acting out His pastimes. And sometimes, achieving His personal audience, they remain peaceful and silent". (Srimad-Bhagavatam 11.2.33)]
Gurudeva is always sinking in the ocean of Lord Sri Krsna's sweet pastimes. That kind of sadhu or Guru has extraordinary character. Sometimes such sadhus think, "Until now I have not had darsana of Krsna and Radhika. What shall I do? Where should I go?" He cries bitterly, wandering here and there, as exemplified by Sri Caitanya Mahaprabhu. Sometimes he begins to search for Them: "Where are You?" And sometimes he becomes silent. The disciple should learn all these moods.

Regarding the above-mentioned verse (Srimad-Bhagavatam 11.2.33), the pure devotee sometimes weeps. Sometimes, he remembers, "Lord Sri Krsna is the Supreme Lord. Still, although He is full with so many opulences, He is hiding Himself in the assembly of the gopis." The pure devotee then becomes happy and begins to laugh loudly. Sometimes he feels, "I have seen Radhika and Krsna." He then becomes extremely happy and begins to sing the glories of Radhika and Krsna. These are the moods a pure disciple should learn from his Gurudeva.

This human form is very mercifully given by Lord Sri Krsna, because He is causelessly merciful. So don't waste your time in household life. Lord Krsna has personally told us that it is a blind well. You have tasted sense gratification in your past millions of lives. Don't go in that direction again. We should learn all these things from Gurudeva, and follow his instructions. 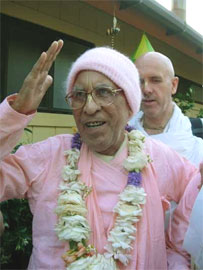 Returning to his quarters after giving class

[Srila Narayana Maharaja:] The Guru has so much love and affection for his disciple, but he is not attached. He is totally attached to Sri Krsna; he does not have even a fraction of attachment anywhere else. He will be merciful and teach all these things.

[Question:] What is the difference between love and attachment?

[Srila Narayana Maharaja:] There is so much difference. It is like the difference between Heaven and Earth or the Sky and Hell (Akash and Patala). Attachment is lust, and love is pure.