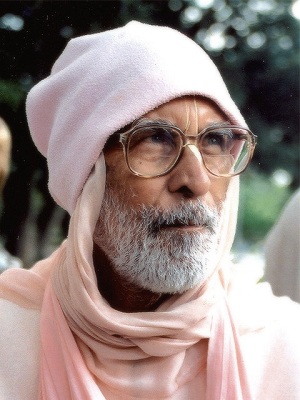 Today is Christmas Day, the birthday of Jesus Christ. In Europe and other countries, hardly anyone knows what Jesus Christ was doing in his youth, at around 15 years of age. Indian history shows that he was in India, where he visited Vrndavana, Ayodya, Jagannatha Puri, and other pilgrimage places. In Vrndavana he heard the name of the Supreme Personality of Godhead, Krsna, and when he went to Jagannath Puri he heard how the local persons pronounce Krsna as Krusna or Krusta. Later, Krusta became Christos. Later, Krusta became Christos (or Khristos) , and then Christus , so the change in name is actually only a difference in language. *[See Endnote 1]

When Jesus returned to Galilee from India, he preached the same devotion he had learned in India. By his mercy, his followers preached the mission of God everywhere, and it was therefore gradually distributed in Western countries.

There are not many Gods – There is only One. In the Bible it has been written: “God created man after His own image.” If the Supreme Lord, God, has no form, then how can He create so many worlds and so many forms? God has form. He has all qualities.

‘Christ’ means ‘Krsna’, the One without a second, the Supreme Lord. In the Bible we see that God has a transcendental form. Jesus has called him father, so there is some relation. We are refined Christians because we totally follow this understanding. Many of those who call themselves Christians don’t truly follow Christianity, because they say that God is formless, but the Bible actually tells that God has a form and that form is transcendental.

Today, on the birthday of Jesus, we are giving honor to him. He was a manifestation of God called saktyavesa-avatara. God has empowered him, and that is why he was able to preach everywhere.Krsna is very merciful – very, very merciful. He is so beautiful, His qualities are transcendental, and the song of His flute is so sweet that it attracts everyone. We have forgotten Him. We are His part and parcel; that is, we are His servants or maidservants, whether we accept this or not. We have forgotten Him, and that is why maya (the Lord’s material, deluding potency) has taken us to this world.

Sri Krsna has mercifully given this human body, which is very strong, like a boat. He has placed a captain in this boat, and that captain is Sri Gurudeva. The favorable winds are blowing very fast, and these winds are sadhu-sanga, the association of devotees. For example, while you remained in your homes, we came from India.

One of Gods messengers was Srila Bhaktivedanta Swami Maharaja. Srila Swami Maharaja went door to door, to islands in the midst of oceans, on the top of hills, and in the depths of forests. He went everywhere and preached. How merciful are Krsna and His associates!

Having all these facilities, if you do not take the opportunity to realize your self, to realize that you are soul and that the Supersoul, Krsna is present with you, then you are committing spiritual suicide. [*See Endnote 2]

So don’t waste a minute’s time without worshipping Krsna. The money, houses, dogs, cats, cars, and so many other things you are collecting cannot give you any help at the time of death. You will have to go alone, and where you will go, you don’t know. So don’t waste time. All facility is available, so you are very fortunate. The only aim and object of this life should be this: ‘Realization of my self and Krsna, and performance of pure bhakti.’

Krsna is causelessly merciful. He has all powers, and He has invested all His powers and qualities in harinama (His holy names):

Krsna’s names are more powerful than Krsna Himself. These names can stop your pain of endless birth and death, and they can give you love for Krsna. You should chant and remember the sweet pastimes of Krsna with great honor and strong belief.

Krsna lives in Goloka Vrndavana with His associates – Nanda Baba, Mother Yasoda, Sridama, Subal, Madhumangala, and the gopis, including Srimati Radhika. He always plays there. He thinks, “My servants and maidservants have forgotten Me.” In order to deliver them, He therefore descends with all of His associates in this material world and performs so many sweet pastimes here. He is unlimited, He is beyond the limitation of length and breadth, inside or outside; He is everywhere.

All worlds are within His belly, and yet Mother Yasoda binds Him with the silken rope which holds her hair in a braid. He kindly picked up the great mountain Govardhana and held it for seven days on His left pinky. At that time He told all the Vrajavasis, “Come under Govardhana. I will save you from the rains arranged by Indra.”

At the end of His manifest pastimes, He took with Him His associates from Dvaraka as they were in the guise of their fighting and killing each other. Thus He removed the burden of the Earth, and then ascended with His eternal associates to His Goloka Vrndavana. He performed such sweet pastimes. How merciful He is!

He came as Lord Ramacandra, with Sita, Laksmana, Bharata, Sratrugna, and Hanuman, and in that form He performed very pathetic, heart-rending pastimes. Ravana kidnapped Sita-devi, and Hanuman discovered where She was. With the help of monkeys and bears Ramacandra built a bridge over the ocean, and He killed Ravana and Ravana’s entire army. Sita is Rama’s eternal spiritual energy, but He sent Her away. This is a very sad pastime, so why did He do this? He thought: People will hear or read My pastimes and engage in bhakti (devotional service) to Me. Bhakti is so powerful that it is able to take out all the malice and manifest pure love in their heart. They will be liberated, they will join Me in My service and become happy.

Bhakti is a very easy method to reach God.

If you cannot pray, then simply offering respectful obeisances will do. If you sing God’s names and dance, or even chant loudly while walking, or even if you chant softly in the mind, or even if you name your dog or cat or cow Narayana, Krsna, or any of Gods names, you will be liberated at once, like Ajamila. [*See Endnote 3]

My request is that you should not waste this human life. Don’t be always engaged in money-making. Even if you become more wealthy than Bill Gates, still, you cannot be happy. So try to engage in this very easy method of bhakti. Then you will be liberated from all miseries, and you will be happy forever.

“Prabhupada: Christian religion is practically, from the name it appears – ‘Christian’ and ‘Krsnian’. Original word of this ‘Christ’ comes from the Greek word ‘Kristo’.

Prabhupada: Yes. This ‘Christa’ is Krsna.

Dr. Weir: From the Sanskrit?

Prabhupada: Yes. Krsta is the popular word for Krsna. And Krsna is always anointed with tilaka. We follow this, tilaka, Krsna, anointed with this sandal pulp. So, so far I think, there is some very near relationship with this ‘Christian’ and ‘Krsnia’. Krsta means ‘love’, love of Godhead or love.” (Room Conversation, September 4, 1971, London).

Father Emmanuel: I think Jesus, as the son of God, has revealed to us the actual name of God: Christ. We can call God ‘Father’, but if we want to address Him by His actual name, we have to say ‘Christ’.

Srila Prabhupada: Yes. ‘Christ’ is another way of saying Krsta, and ‘Krsta’ is another way of pronouncing the name of God, Krsna. Jesus said that one should glorify the name of God, but yesterday I heard one theologian say that God has no name-that we can call Him only "Father." A son may call his father ‘Father’, but the father also has a specific name. Similarly, ‘God’ is the general name of the Supreme Personality of Godhead, whose specific name is Krsna. Therefore whether you call God ‘Christ’, ‘Krsta’ or ‘Krsna’, ultimately you are addressing the same Supreme Personality of Godhead.

Father Emmanuel: Yes, if we speak of God's actual name, then we must say, "Christos." In our religion, we have the Trinity: the Father, Son, and the Holy Spirit. We believe we can know the name of God only by revelation from the Son of God. Jesus Christ revealed the name of the father, and therefore we take the name Christ as the revealed name of God.

Srila Prabhupada: Actually, it doesn't matter – Krsna or Christ – the name is the same. The main point is to follow the injunctions of the Vedic scriptures that recommend chanting the name of God in this age. The easiest way is to chant the maha-mantra: Hare Krsna, Hare Krsna, Krsna Krsna, Hare Hare/ Hare Rama, Hare Rama, Rama Rama, Hare Hare.” (Science of Self Realization, Chapter 4).

“Yes. Krsna means ‘the supreme lover and beloved’. He attracts everyone. There is one Greek word, krista. The meaning is the same, ‘love.’ And from this Krista, the word Christ has come. So this word Christ also has connection with Krsna.” April 13, 1975 Srimad-Bhagavatam lecture)

The human body, which can award all benefit in life, is automatically obtained by the laws of nature, although it is a very rare achievement. This human body can be compared to a perfectly constructed boat having the spiritual master as the captain and the instructions of the Personality of Godhead as favorable winds impelling it on its course. Considering all these advantages, a human being who does not utilize his human life to cross the ocean of material existence must be considered the killer of his own soul.” (Srimad-Bhagavatam 11.20.17)]

“Ajamila was a resident of Kanyakubja (the modern Kanauj). He was trained by his parents to become a perfect brahmana by studying the Vedas and following the regulative principles, but because of his past, this youthful brahmana was somehow attracted by a prostitute, and because of her association he became most fallen and abandoned all regulative principles. Ajamila begot in the womb of the prostitute ten sons, the last of whom was called Narayana. At the time of Ajamila's death, when the order carriers of Yamaraja came to take him, he loudly called the name Narayana in fear because he was attached to his youngest son. Thus he remembered the original Narayana, Lord Visnu. Although he did not chant the holy name of Narayana completely offenselessly, it acted nevertheless. As soon as he chanted the holy name of Narayana, the order carriers of Lord Visnu immediately appeared on the scene. A discussion ensued between the order carriers of Lord Visnu and those of Yamaraja, and by hearing that discussion Ajamila was liberated. He could then understand the bad effect of fruitive activities and could also understand how exalted is the process of devotional service.” (Srimad-Bhagavatam 6.1 Summary by Srila Bhaktivedanta Swami Maharajá Prabhupada)]