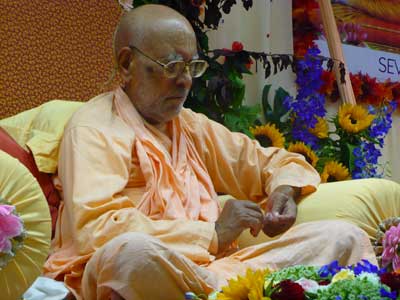 ["The supreme occupation for all humanity is that by which men can attain to loving devotional service unto the transcendent Lord. Such devotional service must be unmotivated and uninterrupted to completely satisfy the self." (Srimad-Bhagavatam 1.2.6)]

Try to be like Pariksit Maharaja, who was cursed to die after seven days. He forgot to take any prasadam, and he did not even drink any water during that seven-day period. He did not sleep at all, for he was engaged day and night in hearing Hari-katha. Then, after seven days he left his body without any suffering and went to Goloka Vrndavana. Try to hear with the same absorption as Pariksit Maharaja.

[Srila Narayana Maharaja then called on Sripad Padmanabha Maharaja to speak about uttama-bhakti, after which he himself said:]

If you want to know more, you should read Bhakti-rasamrita-sindhu-bindu by Srila Visvanatha Cakravarti Thakura. You must read this book. There you will find a systematic way to express the topics of pure bhakti. You will see pravritti-mulaka, nivritti-mulaka (positive and negative regulations of devotion) *[See Endnote 1] and so on. There are so many things to tell.

The word anukulyena refers to those activities which are favorable for advancement in devotion. We should reject those practices that are not favorable. We should accept those activities which are favorable for Krsna's service. Not only to please Him - we have to please Him and act for His benefit. Mother Yasoda makes Krsna weep, but her activity is pure bhakti.

You should know that bhakti includes all the stages of bhakti, beginning from the smallest fraction - sraddha (faith). What is sraddha? It is the conviction that if one performs Krsna-bhakti, his life will be successful. The desire to abandon all desires other than to serve Krsna - this desire is sraddha. From where does sraddha come? This desire is transcendental; it comes only by sadhu-sanga and from Gurudeva, by the mercy of Krsna. It is in the heart of Krsna's associates, and from there it comes in the heart of the aspiring devotee.

After this, the devotee associates with a pure devotee for a second time *[See Endnote 2], and he realizes that a Guru is needed. Without Guru, one cannot enter the realm of bhakti. We must take initiation from any bona fide Guru. Here in this world there are thousands upon thousands of cheaters in the form of Guru. They cheat others. They make disciples only for wealth. They cannot remove the doubts and ignorance of their disciples. They cannot inject bhakti in their disciples' hearts. We should be careful to avoid such cheaters.

The primary limbs of bhakti are guru-padasraya (taking shelter of the lotus feet of the guru) by initiation, taking siksa (instruction) from Gurudeva, and visrambhena guru-seva (serving the Guru intimately). It is not possible to advance in bhakti without serving a bona fide Guru:

[Just try to learn the truth by approaching a spiritual master. Inquire from him submissively and render service unto him. The self-realized soul can impart knowledge unto you because he has seen the truth. (Bhagavad-gita 4.34)]

If we are hearing from Gurudeva but not serving him, our hearing will bear no fruit. We should serve him and obey him; then nistha (steadiness in devotion) will come, and after that ruci (taste) and asakti (attachment to Krsna) will come. After asakti, suddha-sattva (pure goodness), rati, will come. Rati is the transcendental essence of samvit (Krsna's spiritual potency of knowledge) and hladini sakti (His spiritual pleasure potency) on the basis of sandhini (His spiritual existence).

Bhakti is of two kinds. One kind is vaidhi-bhakti and the other is raganuga-bhakti. We should begin from vaidhi-bhakti. Then, by hearing the sweet pastimes of Krsna from a bona fide Guru or sadhu, one may develop greed to serve Krsna like His cowherd friends such as Sudama, Sridama, Madhumangal or Subal, or like His parents Nanda Baba and Yasoda Maiya, or more than that, like the Gopis; and more: like the palya-dasis of Srimati Radhika, the manjaris. This greed comes gradually.

The essence of bhakti is the service of Radhika to Krsna, and it encompasses the highest stages of prema, sneha, mana, pranaya, raga, anuraga, bhava, mahabhava, rudha, adhirudha, modana and then madanakhya. The highest mood of loving service to Krsna (mahabhava) is present in all of the gopis. It is partly in Dvaraka-puri, in the Queens of Dvaraka like Satyabhama and Rukmini. However, the higher stages of mahabhava, like adhirudha, are not found in anyone else except the gopis.

Mohan (feelings of separation of a beloved in mahabhava) may also be slightly present in Candravali and others like her, but the highest development of mohan is only in Srimati Radhika. In mohan there are also citrajalpa *[See Endnote 3] and all other ecstatic symptoms in the mood of separation; and this may be present in Lalita or Visakha to some extent. Madanakhya-mahabhava is not found in Candravali, or even in Lalita or Visakha. The topmost most mood, madanakhya-mahabhava, is found only in Radhika, at the time of meeting. It may be that when Krsna and Radhika are sitting and speaking together, Radhika is thinking, "Where is Krsna? Where is Krsna?" She begins to lament and ask, "Where? Where? Where?" This is madanakhya-mahabhava. This is not found in anyone else but Srimati Radhika. Bhakti covers all stages up to this point.

[End of the continuation of Part One. Part Two was already sent to you as the previous Hari-katha.]

[*Endnote 1 - "Of the sixty-four limbs of bhakti that are described in Bhakti-rasamrta-sindhu, the first ten beginning from taking shelter of the lotus feet of a spiritual master, involve the cultivation of bhakti through endeavors arising from positive activity (pravrtti-mulaka). These ten limbs are the beginning forms of bhajana. After this the next ten limbs describe activities that are to be given up. These include renunciation of the association of non-devotees, avoidance of seva-aparadha and nama-aparadha, and so on. To refrain from such activities is what is meant by the cultivation of bhakti through endeavors arising from avoidance of negative activity (nivrtti-mulaka). One should act in such a way as to exclude these negative items.

The meaning of the word anusilana has thus been defined in terms of endeavors or cesta-rupa of two kinds, pravrttyatmaka and nivrttyatmaka, and in terms of sentiments that arise in connection with such endeavors, bhava-rupa. When such cultivation (anusilana) is in relation to Sri Krsna or when it is performed for His pleasure, it is called bhakti. (Bhakti-rasamrta-sindhu-bindu, verse 1, Sri Bindu-vikasini-vrtti, Comment)]

[Endnote 2 - Sadhu-sanga is the root of bhagavad-bhakti (Caitanya-caritamrta, Madhya-lila 22.83). In Srimad-Bhagavatam (11.20.8) the Supreme Lord has said: "By virtue of the good fortune of their previous births, those in whom sraddha is awakened towards My lila-katha are eligible to take up bhakti."

Srila Jiva Gosvami, in defining the word yadrcchaya (voluntarily, spontaneously or by their own will) used in this sloka, has said: "By the association of the Lord's supremely independent devotees and as a consequence of the mercy obtained from them, one obtains great fortune (saubhagya). That saubhagya itself becomes the eligibility for bhakti."

The meaning of saubhagya is that by the contact of sadhus in one's previous life and by the mercy obtained from them, a very deep impression (samskara) is formed upon the mind or heart. When it is nourished again in the present life, it arises in the form of sraddha. This sraddha is the cause of the awakening of bhakti. In this connection it is said in Srimad-Bhagavatam (3.25.25):

"In the association of pure devotees one hears descriptions of My heroic deeds, which are very pleasing to the ear and the heart. Such descriptions bestow real knowledge of My excellence. By regular hearing and contemplation of such topics one is liberated from ignorance, as a result of which one successively attains sraddha, rati (bhava-bhakti) and prema-bhakti towards Me." (Bhakti-rasamrta-sindhu-bindu, verse 3, Sri Bindu-vikasini-vrtti, comment)]

[Endnote 3 - "Citrajalpa is variegated speech; it is an ecstatic symptom appearing in mohana-mahabhava. Ujjvala-nilamani (14.174, 178-80) states it as follows: 'It is virtually only within Srimati Radharani that the ecstasy of bewilderment arises. She has attained to a special stage of this bewilderment, a wonderful state that resembles delusion, and is known as divyonmada. It has many aspects, which come and go unsteadily, and one of these manifestations is citra-jalpa. This talk, induced by Srimati Radhika seeing Her beloved's friend, is filled with covered anger and comprises many different ecstasies. It culminates in Her intense, anxious eagerness. Citra-jalpa has ten divisions: prajalpa, parijalpa, vijalpa, ujjalpa, sanjalpa, avajalpa, abhijalpa, ajalpa, pratijalpa, and sujalpa.'"]