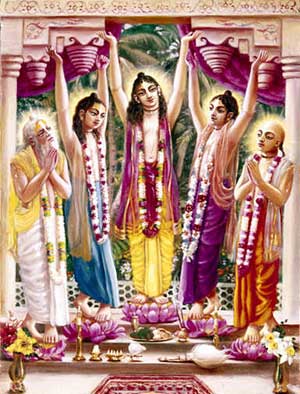 Siva replied, “This is impossible, so I will personally come as your son.”

Thus, Sadasiva appeared as his son.

At the time of his birth, Advaita Acarya was given the name Kamalaksa, which means ‘one who has very beautiful lotus eyes’. He was very intelligent, and in a few years he completed his study of all the Vedic scriptures and also Sanskrit grammar.

His father was a servant of the king. One day, when he was about five or six years old, his father took him to the royal palace, where there was a temple of the demigoddess Devi (Kali). There, the king and his father offered their obeisances to Kali, but that boy, Kamalaksa, did not do so. Seeing this, the king became angry,

Kamalaksa’s father said, “The king is angry. I am his servant. Why are you not offering obeisances to Kali? Kali is a very exalted demigoddess, and she can give any boon. Everyone respects her, so you should also respect her and offer your obeisances.

Kamalaksa replied, “If I will do so, Kali will be destroyed.”

Saying this, he offered his obeisances. At once there was an explosion, and the deity of Kali broke into many pieces.

All those who were present began saying, “Oh, who is he?” Why did this happen?” The answer is that Advaita Acarya is Sadasiva and in this world Kali is Lord Siva’s wife. She is his sakti, or power. She feels herself subordinate to her husband and cannot tolerate his bowing down to her. That is why her deity exploded.

After some time, Advaita Acarya went to Santipura in West Bengal, and he also had a residence in Navadvipa, near the house of Srivasa Acarya (Srivasa-angana). He used to live in Santipura, but from time to time he would come to Navadvipa, where He would teach boys in a Sanskrit school.

Sri Visvarupa Prabhu, the elder brother of Sri Caitanya Mahaprabhu, used to study at that Sanskrit school. After some time Visvarupa became renounced. He left his house and became sannyasi. Mother Saci-devi became very upset by this, thinking that Advaita Acarya’s close association with her son that influenced him to take up the renounced order. She criticized Advaita Acarya by saying, “His name is ‘Advaita’, meaning ‘non-dual’, but he is not ‘advaita.’ He is ‘dvaita’, meaning ‘dual’ or ‘duplicitous’, because he taught my son, and then my son became renounced.”

After some time, when Sri Caitanya Mahaprabhu visited the house of Srivasa Thakura (Srivasa Angana). There, He manifested sata-prahariya-bhava, which means that He was in the mood that: “I am Visnu.” *[See endnote 2] At that time He was giving boons to all present, saying, “Be blessed with prema!” And at once all began to dance and sing and weep.

The devotees requested Him, “Please give this boon of prema to Your mother.”

Sri Caitanya Mahaprabhu replied, “I cannot give prema to her. She has committed an offense at the lotus feet of Advaita Acarya. She must go and apologize to him, and then I will give her this boon.”

Mother Saci at once went to Santipura and apologized to Advaita Acarya, who immediately offered obeisances to her. He placed his head on her lotus feet and said, “O Mother, you made no offense, and if there was an offense, I excuse you.”

* * * *
For some time, Advaita Acarya was very worried, thinking, “Although Sri Caitanya Mahaprabhu is the Lord, my Lord, He is always offering obeisances to me.” He could not tolerate this, and one day he had an idea. He went to Santipura and began to explain the Bhagavad-gita according to mayavada-philosophy: Tattvam asi, aham brahmasmi (I am that impersonal God), and sarvam khalv idam brahma (everything is brahma, that impersonal God.)” When Caitanya Mahaprabhu heard about this, He went to Santipura, where He pulled Advaita Acarya by his beard and began to kick him. Seeing this, Sita devi, Advaita Acarya’s wife told Mahaprabhu, “Oh, do You want to kill this old person?”

Advaita Acarya began to dance saying, “Oh, now I have received a boon: Mahaprabhu has beaten me. The master can beat the servant; The servant cannot beat the master. So now it is definite that He considers Himself my master. He can beat me and punish me as He likes.”

Nityananda Prabhu then said, “Oh, he thinks Himself a Vaisnava, but he has no knowledge of Vaisnava principles. Maha-prasadam never becomes impure, even if it is touched by the mouth of a dog. Still he speaks like this, so he is an offender of maha-prasadam.”*[See endnote 4] In this way they both used to engage in loving, joking quarrels.

Once, during the time of the Ratha-Yatra festival in Jagannath Puri, after Sri Caitanya Mahaprabhu’s devotees had completed their cleaning of the Gundica Temple, they sported together in the waters of the Indradyumna Sarovara lake. They were all splashing water on each other. Nityananda Prabhu and Advaita Acarya began to throw water on each other, and Nityananda Prabhu defeated Advaita Acarya. He later began to rebuke Nityananda Prabhu, calling Him bad names. In this way, They used to engage in love-filled mock quarrels.
Gaura Premanande! Hari Haribol.

[*Endnote 1 –
In the Puranas it is found that Siva appears sometimes from the heads of Brahma and sometimes from the head of Visnu. The annihilator, Rudra, is born from Sankarsana and is the ultimate fire to burn the whole creation. In the Vayu Purana there is a description of Sadasiva in one of the Vaikuntha planets. That Sadasiva is a direct expansion of Lord Krsna's form for pastimes. It is said that Sadasiva (Lord Sambhu) is an expansion from the Sadasiva in the Vaikuntha planets (Lord Visnu) and that his consort, Mahamaya, is an expansion of Rama-devi, or Laksmi. Mahamaya is the origin or birthplace of material nature.

[Endnote2 –
One day in the house of Srivasa Thakura, Lord Caitanya Mahaprabhu sat down on the bed of Visnu, and all the devotees worshiped Him with the Vedic mantras of the Purusa-sukta, beginning with sahasra-sirsa purusah sahasraksah sahasra-pat. This veda-stuti should also be introduced, if possible, for installations of Deities. While bathing the Deity, all the priests and devotees must chant this Purusa-sukta and offer the appropriate paraphernalia for worshiping the Deity, such as flowers, fruits, incense, arati paraphernalia, naivedya, vastra and ornaments. All the devotees worshiped Lord Caitanya Mahaprabhu in this way, and the Lord remained in ecstasy for seven praharas, or twenty-one hours. He took this opportunity to show the devotees that He is the original Supreme Personality of Godhead, Krsna, who is the source of all other incarnations, as confirmed in the Bhagavad-gita (10.8): aham sarvasya prabhavo mattah sarvam pravartate. All the different forms of the Supreme Personality of Godhead, or visnu-tattva, emanate from the body of Lord Krsna. Lord Caitanya Mahaprabhu exposed all the private desires of the devotees, and thus all of them became fully confident that Lord Caitanya is the Supreme Personality of Godhead.

Some devotees call this exhibition of ecstasy by the Lord sata-prahariya bhava, or "the ecstasy of twenty-one hours," and others call it mahabhava-prakasa or maha-prakasa. There are other descriptions of this sata-prahariya bhava in the Caitanya-bhavagata, Chapter Nine, which mentions that Sri Caitanya Mahaprabhu blessed a maidservant named Dukhi with the name Sukhi. He called for Kholaveca Sridhara, and showed him His maha-prakasa. Then He called for Murari Gupta and showed him His feature as Lord Ramacandra. He offered His blessings to Haridasa Thakura, and at this time He also asked Advaita Prabhu to explain the Bhagavad-gita as it is (gitara satya-patha) and showed special favor to Mukunda. (Caitanya-caritamrta, Adil-lila, 17.18 Purport)]

[Endnote3 –
When the throbbing pain of the first days of Visvarupa's departure had waned to a dull despondent ache, Mother Saci calmly considered the following thoughts, "Advaita Acarya, due to my son's close association with him, must have influenced Visvarupa to take up the renounced order."

Mother Saci never spoke these thoughts aloud, careful not to commit vaisnava-aparadha, she silently suffered her fate. Then gradually, she started finding solace in little Visvambhara. He seemed to understand His mother's grief and did much to give her joy, slowly filling up the emptiness Visvarupa had left behind.

Then, after sometime had passed and Visvambhara had grown up to a young man, He also started to spend more time in Advaita Acarya's company. Visvambhara stayed little time at home with His young and patient Laksmipriya, but was for long hours in Advaita's house. The sad realization dawned on Mother Saci that her son was hardly at home and often to be seen in Advaita's house. She began to think, "Advaita Acarya will also take this son away from me."

So out of desperation and anguish, Mother Saci burst out, exclaiming, "To the world he may be known as `Advaita', non-dual, but to me he is `Dvaita', full of duplicity. He has already driven out my moonlike effulgent first son and now he will not leave this younger one in peace. I am a destitute mother, yet no one has any pity for me. This Advaita has deceived me."

This is all that Mother Saci had said. It is supposed to be so offensive that the Lord deemed her unfit to render devotional service to the Supreme Lord.

Some persons make the grave blunder, for which they will soon suffer, of trying to compare Vaisnavas, calling one a bigger Vaisnava than the other. Sri Caitanya made His own mother instrumental in teaching the whole world how to avoid and become free from vaisnava-aparadha. If someone does not pay close heed to Sri Caitanya's warnings and teachings on such vaisnava-aparadha, then he will remain completely ignorant about this offence and thus suffer the terrible consequences. In this context, a few words can be said of why Lord Caitanya revealed this pastime. Lord Caitanya, the Supreme Lord, is the knower of past, present and future. He foresaw that some evil-minded persons would try to exploit this situation to their own selfish advantage.

They will wrongly proclaim Advaita Acarya to be the Supreme Lord Krsna, thus violating the instructions of the pure Vaisnavas and thereby committing a grievous offence. These miscreants will protest against those who will rightly declare that Advaita is a `pure Vaisnava devotee'. Although they may claim to be the followers of Advaita Acarya, still no one will rescue them from the jaws of imminent destruction, not even Advaita Acarya himself.

Sri Caitanya saw this happening soon in the future, so He punished His own mother in the presence of exalted Vaisnavas like Advaita Acarya. If the disciple commits vaisnava-aparadha, even the spiritual master cannot protect his disciple against the wrath of the Lord.” (Caitanya-bhagavata, Madhya-khanda, Chapter 22)]

Nityananda Prabhu jokingly said, "My belly is not yet filled up. Please take away Your food. I have not taken the least of it. After saying this, Nityananda Prabhu took a handful of rice and threw it on the floor in front of Him, as if He were angry. When two or four pieces of the thrown rice touched His body, Advaita Acarya began to dance in various ways with the rice still stuck to His body.
When the rice thrown by Nityananda Prabhu touched His body, Advaita Acarya thought Himself purified by the touch of remnants thrown by Paramahamsa Nityananda. Therefore He began dancing. Advaita Acarya jokingly said, "My dear Nityananda, I invited You, and indeed I have received the results. You have no fixed caste or dynasty. By nature You are a madman. To make Me a madman like Yourself, You have thrown the remnants of Your food at Me. You did not even fear the fact that I am a brahmana." Nityananda Prabhu replied, "These are the remnants of food left by Lord Krsna. If You take them to be ordinary remnants, You have committed an offense." (Sri Caitanya-caritamrta, Madhya-lila, 3.92-99)]