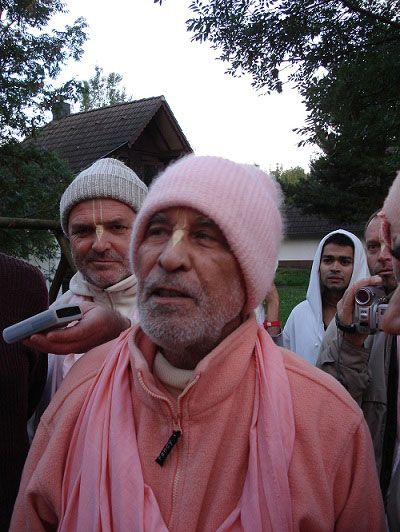 Devotee: Srila Gurudeva, I have been smoking marijuana.

Sripad Padmanabha Maharaja: He wants to ask for forgiveness.

Srila Gurudeva: Always remember that intoxicants cannot give you happiness. Death is coming very soon; you don't know exactly when it will come. If you neglect the rules and regulations, you will have to go to hell. You cannot imagine what hell is like.

Devotee: Attachment to this world is very bad for those who want to practice sadhana-bhakti. I am so attached to my family. What are the consequences?

Srila Gurudeva: Try to give your attachment to Krsna, and in that way you will become happy forever. Other attachments will lead you to hell.

Srila Gurudeva: That is okay, but don't be attached. See only that they are children of Krsna. You have been given the duty as a family member only to see that your family becomes devotees.

Vrndavana dasa (from Denmark): Srila Gurudeva, the other day you asked me for my pranami. You explained that pranama (offering of obeisances) does not mean only to offer folded palms and sastang-dandavat (bowing down on the ground with all eight bodily joints), but to offer one's heart and soul to Gurudeva. In that context, what exactly does pranami mean?

Brajanatha dasa: The day before yesterday he gave you pranami (a donation) from someone else, and then you asked him, "Where is your pranami?"

Srila Gurudeva: You have become a vantasi. Do you know the meaning of vantasi? It means that you again eat what you have already vomited. This is very bad. You left your wife and took saffron cloth (representing the life of brahmacarya), and then you rejected your saffron cloth and returned to her. Don't change like this.

Vrndavana dasa: But you said to me...

Vrndavana dasa: I had never asked your permission to renounce and take saffron. Therefore I did not feel blessed. So, without feeling blessed...

Srila Gurudeva: I do not want to hear any arguments. Be strong.

Vrndavana dasa: By your mercy Gurudeva.

Paramananda dasa (from Ireland): Srila Gurudeva, when we are selling books, we sometimes meet people from the Muslim faith. When we tell them that our namacarya Srila Haridasa Thakura was born in a Mohammadan family, they sometimes ask if in his childhood he ate meat.

Srila Gurudeva: He never took meat in his entire life – since birth.

Sripad Madhava Maharaja: Although he was born in a Muslim family, his family members were like Hindus. He was brought up like a Hindu.

Srila Gurudeva: He was an incarnation of the combination of Brahma and Prahlada. You should know that he would never take meat.

Paramananda dasa: And the Chand Kazi?

Srila Gurudeva: At first he was eating meat. Then, by the association of Sri Caitanya Mahaprabhu, he gave up all his sinful activities.

Sripad Bhaktivedanta Vaisnava Maharaja is preaching everywhere in China in his sannyasa dress?

Sripada Madhava Maharaja: Not when he crosses the border.

Sripad Padmanabha Maharaja: It is not possible at that time.

Srila Gurudeva: Only at the border?

Sripad Nemi Maharaja: Not only the border. The Buddhist religion is accepted by the government because it is China's official religion. But other religions are illegal; completely illegal.

Srila Gurudeva: But the government says that it is all right for an Indian to wear saffron cloth in China.

Sripad Madhava Maharaja: The Svami Narayana groups went there. The government allowed Indians to attend their function because it is their own religion, but Westerners were not allowed.

Sripad Padmanabha Maharaja: Yes, he must change his cloth when in public, but for preaching in a house he always wears his sannyasa dress.

Srila Gurudeva: The devotees in China are preaching very well. Hundreds of devotees have been initiated there.

Devotee: In Hong Kong there is no problem to wear saffron cloth.

Sripad Padmanabha Maharaja: Previously, during the communist time in Russia, our Guru Maharaja, Srila Bhaktivedanta Svami Prabhupada, gave sanction for the devotees to wear ordinary clothing for preaching. He was very pleased by this.

Gurudeva, which chapters will you speak about tonight?

Srila Gurudeva: We will come to Krsna's pastimes with Kaliya, and then with Aristasura, and perhaps Pralambasura.

Sripad Padmanabha Maharaja: Rasananda prabhu (now Sripad Sridhara Maharaja) told me yesterday that he wants to try to speak about Govardhana. He has a very good katha for Govardhana.

Srila Gurudeva: All right. The pastimes of Govardhana include Krsna's punishing the demigod Indra and holding up Govardhana on His finger.

I want to finish those subjects very quickly, so that I can come to Venu-gita, Rasa-lila, and then Gopi-gita. I also want to speak something about Bhramara-gita.

Yasasvini dasi: If someone performs Nirjala Ekadasi but takes your personal prasada remnants, does that break the Ekadasi?

Sripad Madhava Maharaja: You can keep Gurudeva's remnants for honoring on the day after Nirjala. [In that way Nirjala is protected and the devotee is also honoring Gurudeva's prasad.]

Devotee: I have committed some offenses.

Srila Gurudeva: Don't commit offenses. If you increase your chanting, offenses will disappear.