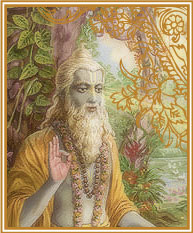 Today is the birthday of Srila Vyasadeva, the son of Parasara Rsi. Srila Vyasadeva divided the Vedas into four sections, and then he took the essence of all the Vedas and Upanisads and wrote Brahma-sutra so that everyone would be able to easily understand. He then wrote fifty-four Puranas, but they were also very difficult to understand. Then he wrote the Mahabharata, and within the Mahabharata he wrote the Gita Upanisad or Bhagavad-gita. Still, he was not happy, however, but he could not understand the reason.

In the meantime, his Gurudeva, Srila Devarsi Narada, came and asked him, “Why are you not happy? You have fully delineated the subject of impersonal Brahman and other knowledge as well. Why should you be despondent in spite of all this?

Srila Vyasadeva replied, “All you have said about me is perfectly correct. Despite all this I am not pacified, and I don’t know why. I therefore question you about the root cause of my dissatisfaction, for you have unlimited knowledge. You can tell me, because you are my Gurudeva.”

Narada then said, “You have written and divided the Vedas, you have written Brahma-sutra, you have written the Puranas and even Mahabharata and Gita. But, you have basically only described dharma (religion), artha (economic development), kama (sense gratification), and moksa (liberation). You have not written about the fact that although Krsna is the Supreme Lord, He performed sweet human-like pastimes of Vraja. That is why you are not happy.

“Please try to write how Mother Yasoda bound Krsna and chastised Him and, although He is the Supreme Personality of Godhead (Para-brahma), He was weeping bitterly because of this. Please write about Krsna playing with His friends, and write about how His friends used to defeat Him in various games. And write about how Krsna placed His head at the feet of the gopis and told them, ‘I have no capacity to repay you, even if I would have the lifespan of Brahma.’ 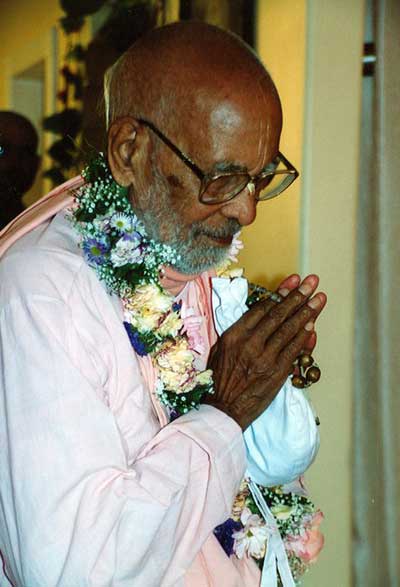 [“I am not able to repay My debt for your spotless service, even within a lifetime of Brahma. Your connection with Me is beyond reproach. You have worshiped Me, cutting off all domestic ties, which are difficult to break. Therefore please let your own glorious deeds be your compensation.” (Srimad-Bhagavatam, 10.32.22)]

Vyasadeva replied, “No, nothing of the sort.”

Narada said, “Oh, you should concentrate your mind by bhakti-yoga, and then you will realize all these pastimes.”

Then, when Narada Rsi left Vyasadeva’s asrama, Vyasadeva concentrated his mind in bhakti-yoga. He entered into trance, and thus he saw that Supreme Para-brahma, Krsna, present before him. Srimati Radhika, Lalita, Visakha, His mother Yasoda, His father Nanda Baba, Subala, Sridhama, and all His associates were also present. Srila Vyasadeva thus saw Krsna’s pastimes, from His birth up to Dvaraka-lila. He saw how the souls who had forgotten Him were covered by maya. He also saw how certain souls in this world, by the help of a bona fide guru, were performing bhajana and going towards Krsna.

In his trance, He then wrote Srimad-Bhagavatam for those who do are not aware of these transcendental topics.

[“Simply by giving aural reception to this Vedic literature, the feeling for loving devotional service to Lord Krsna, the Supreme Personality of Godhead, sprouts up at once to extinguish the fire of lamentation, illusion and fearfulness.” (Srimad-Bhagavatam, 1.7.7)]
The meaning of the verse is that bhakti enters the heart of those who hear Srimad-Bhagavatam, and such persons become happy forever. All calamities and sufferings leave them.

Today is the birthday of that very Vyasadeva, and therefore this day is called Guru-puja or Vyasa-puja.