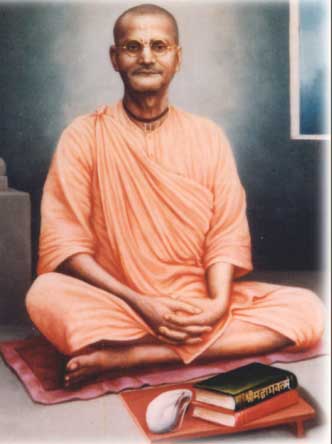 [The following is a transcribed morning walk in Miami, wherein Srila Narayana Gosvami Maharaja affectionately speaks about his Guru Maharaja on the request of a disciple.]

[Devotee:] Is it possible for you to speak something about your spiritual master, Srila Bhakti Prajnana Kesava Gosvami Maharaja?

[Srila Narayana Gosvami Maharaja:] Once, after taking the permission of his Guru Maharaja, Srila Bhaktisiddhanta Sarasvati Thakura, my Gurudeva went to visit Srila Gaura Kisora dasa Babaji Maharaja. At that time, Babaji Maharaja had closed the door of his bhajana kutir, which was a municipal outhouse. He had locked himself inside and refused to meet anyone.

The police superintendent and district magistrate had previously come there and told him, “Babaji Maharaja, why are you sitting in this impure place? We will make you a very beautiful place where you can do bhajana.”

Babaji Maharaja had replied, “I am very weak and cannot open the door.” Why did he say this? He used to tell his own devotees, “The smell of this outhouse is nothing in comparison to the stench of sense enjoyers who come and disturb me, saying, ‘Babaji Maharaja, give me a son, a very qualified wife, and much wealth.’ They used to harass me in this way. Staying in an outhouse is better than having to deal with those people. No one will disturb me while I am here.”

So Gurudeva, along with his paternal aunt, Srimati Saroj Basini, and a brahmacari who later became a very good speaker by the name of Sripad Nemi Maharaja, all went to see Babaji Maharaja. They saw that the door was closed and they called to him, “Babaji Maharaja, please be merciful and open your door. We want to take your darsana.” (meaning, “We beg you to give us your audience.”)

At first, Babaji Maharja gave the same answer he had given the superintendent: “I am very weak, so I cannot open the door.”

My Gurudeva, who was at that time eighteen years old Vinoda-bihari brahmacari, replied, “Babaji Maharaja, we are disciples of Srila Sarasvati Thakura. He has sent us to see you.”

Babaji Maharaja then said, “Oh, you are disciples of Srila Sarasvati Thakura? All right, I will open the door.” He thus allowed the three devotees to enter. They went into the municipal latrine and offered their obeisances.

Babaji Maharaja told my Gurudeva, “You should boldly preach the mission and instructions of Sri Caitanya Mahaprabhu. Do not fear; I will save you from all problems and dangers.”

Guru Maharaja used to tell us this story with tears in his eyes, saying, “This is how I am now able to boldly preach in Bengal and Assam and so many other places.” He told us that this actually took place – Gaura Kisora dasa Babaji Maharaja protected him whenever obstacles came.

For example, Srila Guru Maharaja was once preaching boldly in Assam, and his audience consisted of many persons opposed to Gaudiya Vaisnavism. This group did not accept the worship of Srimati Radhika with Sri Krsna; they worshiped Sri Krsna alone. Guru Maharaja told them, “Krsna-bhakti alone is not perfect. It is like an offense. Also, those who do bhajana but at the same time eat meat, eggs, and fish, and also drink alcohol, are not pure bhaktas. In fact, their mouths are like drains because their mouths are the containers of all kinds of stool, urine, and other wastes.” Hearing this, some of the members of the very large opposition crowd became enraged and shouted, “Caitanya Mahaprabhu is not the Supreme Lord. Do you have any proof that He is?”

In this way, he used to preach boldly. If anyone said anything against Srila Prabhupada Bhaktisiddhanta Sarasvati Thakura or our sampradaya, he would become furious. He would at once attack them, like a lion, with so many sastric arguments that no one could defeat him.

Some time in 1956, Srila Gurudeva came to Mathura to visit Sri Kesavaji Gaudiya Matha. At that time followers of the Nimbarka sampradaya in Vrndavana used to publish a spiritual journal called Sri Sudarsana. In one issue they cast aspersions on Sri Caitanya Mahaprabhu, saying that He was a disciple of Kesava Kasmiri. They said that Kesava Kasmiri was not actually defeated by Sri Caitanya Maharprabhu. Rather, he defeated Mahaprabhu and initiated Him into the Gopal Mantra. *[See endnote 1] In other editions they insolently dared to claim that Gaudiya Vaisnava acaryas such as Srila Visvanatha Cakravarti Thakura were in the Nimbarka sampradaya.

When I showed these editions to Srila Gurudeva, he became extremely angry. He told me, “Bring a paper and pen,” and began to dictate. He then immediately published this dictation as a short essay in our Sri Bhagavata Patrika. The headline was ‘Sri Nimbaditya and Nimbarka are not the same person.’ In the essay he said that nowhere in the scriptures is there any mention of a Nimbarka sampradaya. The Puranas mention a Vaisnava acarya named Sri Nimbaditya, and the Four Kumaras have accepted Nimbaditya Acarya as their sampradaya-acarya.

Nimbarka Svami is a completely different person. Nimbaditya was a disciple of Naradaji at the end of Dvapara-yuga, but Nimbarka Acarya appeared much more recently. Great and eminent authors of scripture such as Srila Jiva Gosvami have mentioned the names of the prominent acaryas of all the other sampradayas, but they have not mentioned the name of Nimbarka Acarya anywhere.

The Nimbarka sampradaya currently uses the Parijata-bhasya which was written, not by Nimbaditya Acarya, but rather by Srinivasa Acarya and Kesava Kasmiri. These two wrote this scripture and then preached that it had been written by their guru.

When this essay was published in Sri Bhagavata Patrika, the office directors of the Sudarsana journal announced that they were making arrangements to prosecute for slander. Srila Gurudeva replied firmly, “We will prove each and every word that we have written on the basis of evidence supported by sastra.” The scholars filed a court case demanding one hundred thousand rupees for defamation. They went to an advocate (lawyer) who told them, “You do not know Sripad Kesava Maharaja. He is a very dangerous person. He knows the law better than we advocates do. Do not put your hands in a snake’s hole, otherwise that snake will come and bite you. Better to leave this alone; better to be silent.”

When the prosecution party heard about Srila Gurudeva’s immense scriptural knowledge and his profound personality, they became absolutely silent, and from that day onwards they did not dare to write any more nonsense. *[see endnote 2]

[Devotee:] You have also described how affectionate your Guru Maharaja was. Can you speak something in this regard?

[Srila Narayana Gosvami Maharaja:] Once, while Pujyapada Vamana Maharaja was doing service at a printing press in Cincurah, his fingers were severely injured. Our Guru Maharaja began to weep and at once took him to a medical hospital in Kolkata, where he arranged treatment for him. Although Srila Vamana Maharaja’s fingers had been crushed under the printing press, after some time they were completely healed with only a scar remaining.

There was a disciple of our Guru Maharaja who joined before me, whose name was Ananga Mohan. He used to play very sweetly on mrdanga and engage in many personal services for our Guru Maharaja, such as cooking, washing clothes, and so on.

He contracted tuberculosis, at which time he was vomiting blood, even on the body of our Guru Maharaja. Guru Maharaja served him with his own hand, cleaning away his stool, feeding him, and nourishing him in every way.

I told Guru Maharaja, “Please feel free to go and preach. I will look after him. Do not worry.” Kindly giving me this ‘love burden’ of caring for Ananga Mohan, he went to preach. I would then clean Ananga Mohan’s vomit and stool, burying it in the earth. Guru Maharaja also sent me with him and Trigunatita brahmacari to Tambaram Hospital in Madras, which was a hospital for tuberculosis patients, and he was there for about three or four months.

Because this hospital was quite expensive, and Guru Maharaja’s god-brothers became upset and told him, “We cannot give you any of the money we have collected. Why are you doing all of this for your disciple?!” In this regard he did not care for the opinion of his opposing god-brothers, and finally they gave up his association. How loving he was.

Although Guru Maharaja spent a great deal of money to save Ananga Mohan, he left his body in Tabaram Hospital. At the time of his departure Guru Maharaja was performing parikrama in Navadvipa with thousands of pilgrims. I wrote him a letter saying, “I could not save Ananga Mohan, so Trigunatita prabhu and I are returning to Siddhabari. Please excuse me.” He read my letter and began to weep loudly.

He loved me so much for this. I had also developed slight symptoms of tuberculosis, and Guru Maharaja took me to a hospital in Calcutta, where I was treated and recovered.

Guru Maharaja gave sannyasa first to Srila Vamana Maharaja, Srila Trivikrama Maharaja and me. We three then began to increase our preaching fields and we performed many other services. Previously, Guru Maharaja’s respectful relationships with the god-brothers obliged him to give scope to their opinions and ideas, but now he was independent.

He would go to various places with thirty or forty brahmacaris and sannyasis and preach. Sometimes he had audiences of 15,000 people. At that time there were no microphones, so his audiences heard him by his loud speaking.

I used to personally go with him, and at those times I would cook for him, massage him, and wash his clothes. When he gave classes I would take notes. On his order I learned Bengali and read the Jaiva Dharma, and then I became a very good speaker. Also, at that time, I was known as the best singer in the Gaudiya Math.

[Srila Narayana Gosvami Maharaja:] In fact, Srila Bhaktivedanta Svami Maharaja wrote to me: “Our relationship is certainly based on spontaneous love. That is why there is no chance of us forgetting one another. By the mercy of Guru and Gauranga may everything be auspicious for you. This is my constant prayer. From the first time I saw you I have been your constant well-wisher. At his first sight of me Srila Prabhupada also saw me with such love. It was in my very first darsana of Srila Prabhupada that I learned how to love.”

[Brajanath dasa:] Remembering your Guru Maharaja, you spoke for such a long time.

[Srila Narayana Gosvami Maharaja:] I became unaware of the time.

“The next morning the poet came to Lord Caitanya and surrendered unto His lotus feet. The Lord bestowed His mercy upon him and cut off all his bondage to material attachment” (Caitanya-caritamrta, Adi-lila, 16.107).]

[*Endnote 2: On Srila Narayana Gosvami’s request, we have added some sentences from his Biography of his Guru Maharaja to his discussion of Nimbaditya Acarya.]