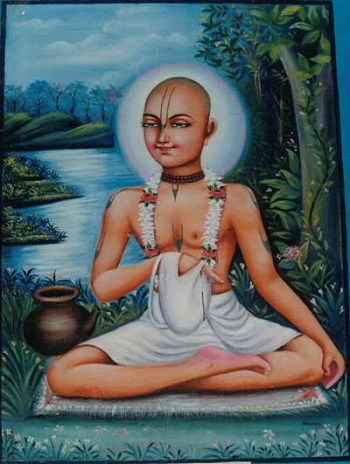 A brahmana in Kasi Varanasi once prayed to Lord Siva, "I want to give my daughter in marriage, but I have no money. Please give me money." Lord Siva told him, "Go to Vrndavana and meet with Srila Sanatana Gosvami. You can ask him to give you some wealth for your daughter's marriage."

The brahmana went to Vrndavana, by foot, and there he asked the villagers there for the whereabouts of a person named Sanatana Gosvami. As they all knew him, they pointed out his residence.

Srila Sanatana Gosvami was practicing bhajana near the Yamuna River at Kaliya-hrada, the former abode of the very poisonous snake named Kaliya. Kaliya-hrada was close to the Yamuna, and therefore its surrounding area was full of sand. Srila Sanatana Gosvami wore only a loincloth. He used to go begging door-to-door for a small amount of prasada (Krsna's food remnants), and would take as his meal only one dry chapatti (flat bread), with no salt.

The brahmana arrived at his cottage and told him, "I went to Sankara Mahadeva, Lord Siva, and he told me to meet you. He said you will give me some wealth for my daughter's marriage." Sanatana Gosvami replied, "I have no possessions. You can see that I have nothing but a loincloth." Then he thought, "Oh, Siva cannot tell a lie. He is my bosom friend." Thinking of Lord Siva and contemplating further, he remembered a touchstone he had once disgarded and then forgotten. Now he told the brahmana, "Go to the Yamuna and remove some of the sand, and there you will find a touchstone. It is somewhere in the sand, though I don't remember where."

The brahmana found the jewel, touched it to iron, and the iron turned into gold. He was very, very happy that Lord Siva had told him to come to Vrndavana, and thought with gratitude, "My prayer has been answered by him." On the way home, however, his greed for money increased and he began thinking, "Why did Sanatana Gosvami keep the touchstone in the sand? It had no use there. He must have still more valuable jewels."

He thus returned, and Sanatana Gosvami asked him, "Why have you come back?" He replied, "I've come because I know that you have more valuable jewels than this." Sanatana Gosvami then said, "Go and throw the touchstone in the Yamuna. The brahmana did so with all his power, and then Sanatana Gosvami told him, "Come here. Come here." He gave him the mantra, "Hare Krsna Hare Krsna Krsna Krsna Hare Hare, Hare Rama Hare Rama Rama Rama Hare Hare" and said, "I do not have worldly jewels, but I have transcendental jewels. The jewel of Lord Krsna and Sri Radha will come to you in a very short time. So remain here. Your daughter's marriage will take place automatically. Stay here and chant Hare Krsna." That brahmana followed his instruction and became a very elevated saint.

Wherever he was, Srila Sanatana Gosvami could not live without his beloved Lord Siva – Gopisvara Mahadeva and Bankhandi Mahadeva in Vrndavana, and Kamesvara Mahadeva in Kamyavana forest. In Govardhana he would stay near his very dear friend, Cakresvara Mahadeva, who acquired the name when he served Govardhana Hill and the Vrajavasis by holding up his trident like a cakra, protecting them from the torrential deluge sent by King Indra.