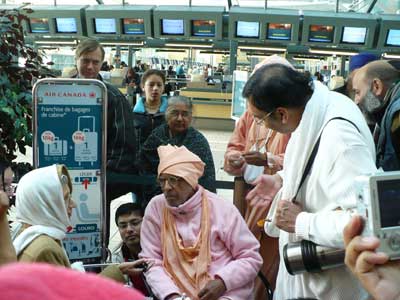 [Srila Narayana Gosvami Maharaja:] When Sri Krsna ate the rasagula, it entered His mouth and into His stomach, and there it became eternal. Whatever Krsna eats – all those things are eternal. Do you understand?

[Srila Narayana Gosvami Maharaja:] Everything in Krsna is conscious.

[Devotee:] It is inconceivable.

[“I worship Govinda, the primeval Lord, the first progenitor who is tending the cows, yielding all desire, in abodes built with spiritual gems, surrounded by millions of purpose trees, always served with great reverence and affection by hundreds of thousands of laksmis or gopis.” (Brahma-samhita 5.29)]

[Devotee:] I think this is one of those things we can only understand when we are there in Goloka Vrndavana.

[Srila Narayana Gosvami Maharaja:] When you go there, then you will be able to understand.

[Ramachandra das:] Then also, we will not understand. Then we will understand only Krsna; we will not think about how all this is happening.

[Srila Narayana Gosvami Maharaja:] The whole world is in Krsna’s stomach. All persons and all living beings are present there, but they are also eternal. So the rasagula is also eternal.

[Devotee:] The rasagula was previously milk. Does it become another living being when it becomes a rasagula?

[Devotee:] Gurudeva, at the Hong Kong airport, just before your flight, you were explaining the types of services performed by the pure Gaudiya Vaisnavas when they are with Caitanya Mahaprabhu in Navadvipa (Mahaprabhu’s eternal abode as it is manifest in this world.) I guess that when we become perfect we will go there, to Navadvipa, to meet with Mahaprabhu and serve Him under the direction of His associates.

Regarding Svetadvipa (Mahaprabhu’s eternal abode of Navadvipa as it is manifest in the transcendental world within the realm of Goloka Vrndavana), is there a difference in what the devotees do there? I am asking because there is no need to write books in Svetadvipa-Goloka. There is no need to preach to others there.

[Srila Narayana Gosvami Maharaja:] You will be an associate of Sri Caitanya Mahaprabhu there, and you will serve there like Sri Gadhadara Pandit, Sri Svarupa-Damodara, and Srila Raya Ramananda. You will serve under their guidance.

[Devotee:] What do they do? What does Srila Rupa Gosvami do?

[Srila Narayana Gosvami Maharaja:] They do so many things.

[Devotee:] There in Svetadvipa? Because you told us at the Hong Kong airport that they write books and they are establishing His mission…

[Srila Narayana Maharaja:] What is Gadadhara Pandita doing in the Navadvipa pastimes of Caitanya Mahaprabhu?

[Srila Narayana Gosvami Maharaja:] No. Here, in this world – in Navadvipa.

[Devotee:] They are worshipping Tota-Gopinath and teaching Radhika’s pastimes to Mahaprabhu.

[Srila Narayana Gosvami Maharaja:] What is Gadhadara Pandita doing with Mahaprabhu in Navadvipa? He is always with Mahaprabhu. So under him, and under those like him, you will do something. There are so many things to do.

[Devotee:] Can you give us a few examples of the endless things that they do in Svetadvipa (Navadvipa in Goloka)?

[Srila Narayana Gosvami Maharaja:] Gadhadara Pandita is like a friend. He is with Mahaprabhu and serving Him in so many ways.

[Devotee:] What about Srila Rupa Gosvami? What is he doing?

[Devotee:] In Gambhira, he is singing songs and inspiring the Lord’s moods. In Godavari he is…

[Devotee:] He is doing kirtan and hosting Him…

[Ramachanda dasa:] Srivasa Pandita is glorifying Laksmi, and Svarupa Damodara is mock-arguing with him. [This is elaborately described in Caitanya-caritamrta, Madhya-lila, chpater 14, verses 202-215 -ed.] This kind of pastime is going on.

[Srila Narayana Gosvami Maharaja:] You will have so many endless services to do there.

[Devotee:] What does Srila Rupa Gosvami do there in Svetadvipa?

[Srila Narayana Gosvami Maharaja:] He will do what he is doing. He will glorify Mahaprabhu there, and play with Him.

[Srila Narayana Gosvami Maharaja:] What will he do?

[Devotee:] Doesn’t he consider himself a disciple?

[Srila Narayana Gosvami Maharaja:] All His associates play with Him there.

[Devotee:] What do you mean by playing? Joking and talking and singing and dancing? In Indradyumna-sarovara lake in Jagannatha Puri, they were all joking. Advaita Acarya and Nityananda Prabhu and others were all joking and splashing each other.

[Srila Narayana Gosvami Maharaja:] How does a friend serve his friend? How? How are the cowherd-boys serving Krsna?

[Srila Narayana Gosvami Maharaja:] There are so many things in Caitanya Mahaprabhu’s pastimes that they can do.

[Devotee:] Oh, as friends – not as disciples.

[Ramachandra dasa:] Once you told me that Navadvipa is the madhurya-dhama (the abode of sweet, human-like pastimes. I asked what the position of Rupa Gosvami is, because we have not heard that he is in Navadvipa. We have seen that he is in Puri…

[Srila Narayana Gosvami Maharaja:] In Svetadvipa, all of Mahaprabhu’s pastime places are present in separate sections.

[Srila Narayana Gosvami Maharaja:] As Mahaprabhu is doing kirtana, they will all join the kirtanas and do so many other things.

(Time to board the plane) 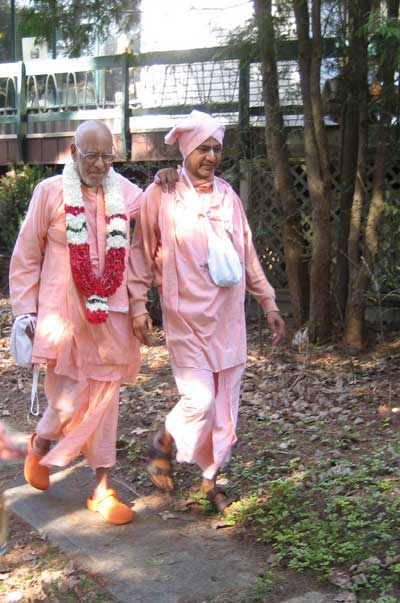 [Trilokanatha dasa:] Yesterday we got an e-mail from a devotee who is making carrot cakes and distributing this as prasadam. She is wondering if it is just the Indian carrots that we cannot eat. The North American carrot is orange rather than red, so she is wondering whether this should not be eaten, or it is okay.

[Srila Narayana Gosvami Maharaja:] There are two kinds of carrots. One is dark red and one is orange. Though we don’t take either of these two types of carrots, I have allowed the Western devotees to take the orange type because it is not like blood. The red one is like blood, so they should not eat it. But, we don’t eat either one. I have allowed them to eat this, and in Delhi I have also allowed them.

[Trilokanatha dasa:] Gurudeva, yesterday morning you said that it is okay for us to eat the orange carrot, but you don’t eat them. So the question is, since you don’t personally eat them, how can we? We offer bhoga to Radha and Krsna through you. Then, after you eat their remnants, you distribute those remnants to us. So the question is, if you are not eating those carrots, how can we eat them? How will it be true prasada?

[Srila Narayana Gosvami Maharaja:] Yes, that is the question.

[A later comment by Trilokanatha dasa:] When he replied to my question on the second day, he chuckled as he spoke, as if to say that we were now getting at the heart of the matter.

Srila Narayana Maharaja: It is quite true; so we should not eat those things. What Vyasadeva has written is true. Vyasadeva knows everything past, present, and future. He was able to see what qualities are present in each entity. For example, Bhagavad-gita describes the sattvika (in the mode of goodness), tamasika (in the mode of ignorance), rajasika (in the mode of passion), and nirguna (transcendental) natures of various persons, plants, foodstuffs, activities, knowledge, and so on.]

The following history was spoken by Srila Narayana Maharaja's servant, Sripad Madhava Maharaja: [American scientists have discovered in their laboratories that there are 21 different types of slow poisons in both onions and garlic; so they are not innocent foods. In Satya-yuga, the sages performed gomedha (cow) and asvamedha (horse) sacrifices for the welfare of the whole universe. A very old cow or a horse would be sacrificed by being cut into pieces and placed in the fire. Afterwards, the rsis would utter mantras and the same animal would come alive in a beautiful young body.

Once the pregnant wife of a sage who was about to perform a gomedha sacrifice had a very strong desire to eat. She had heard that if, during pregnancy, one has a desire to eat and does not fulfill it, the newly born child will always have saliva coming from its mouth. This would be troublesome, both for the mother and the child.

The sage’s wife had a strong desire to eat meat, and thus she stealthily took one piece of meat from the body of the cow that was offered in sacrifice. She hid it and was planning to eat it very soon. Later, the sage was finishing the sacrifice and uttered all the mantras for the cow to come to life. However, when he saw the new cow, he noticed that there was a small part missing from her left side. He was surprised because this had never happened to him before. He went into meditation and realized that his wife had taken away a piece of meat during the sacrifice.

Due to the effect of the mantras uttered by the sage, there was now life in this small piece of meat. The wife now also understood what happened, and she quickly threw the meat far away. Shortly afterwards, red lentils sprouted from the blood of this meat, garlic sprouted from the bones (both garlic and the bones of a cow are white), and onions and carrots sprouted from the flesh. Thus, these foods are never eaten by any Vaisnava. They are foods in the mode of ignorance.]

[A devotee may ask, "Why would our Prabhupada, Srila Bhaktivedanta Swami Maharaja, have allowed carrots to be eaten if they are so bad? The answer was kindly given by Srila Prabhupada himself, in Boston, in 1969. He said, "If I told you all the rules and regulations now, you would faint. So for now, follow all the rules I've given, and make up the balance by chanting Hare Krsna." He also often said that he was following the guidelines given by his Guru Maharaja; that is, to induce the Westerners to first chant Hare Krsna, and as they become more and more established in that, the rules and regulations would gradually come.]