Meeting and Separation in The Pastimes of Lord Ramacandra 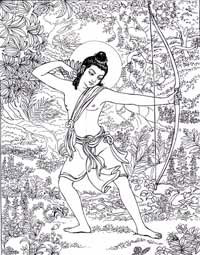 By the mercy of Sri Sri Guru and Gauranga, today we completed the fifth and final day of our Sri Navadvipa Mandala Parikrama. Even though there are over 17,000 devotees in attendance, we have had no complaints and all are very happy.

Tomorrow is the appearance day of Sri Caitanya Mahaprabhu. We will observe a full fast tomorrow, and engage in the unbroken recitation of Sri Caitanya Bhagavata. We will begin here in the temple, in the morning.

Even though we may have experienced some minor difficulties and discomforts, when we go home we should tell everyone that parikrama was very wonderful; we had very nice prasadam, and there were no difficulties. Otherwise, others will not come next year. 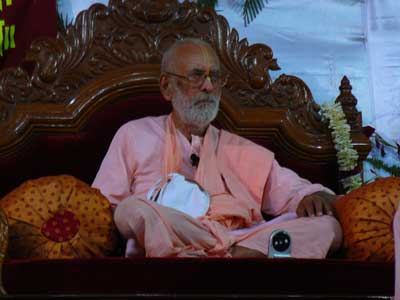 No one could have arranged such a vast parikrama – we did not arrange it. Raising our arms in the air, we simply chanted “Jaya Nitai! Jaya Gaura!” Actually, Sriman Mahaprabhu has been personally making all the arrangements.

Today, we first went to Jahnudvipa. There in Jahnudvipa we heard the story of how Jahnu Rsi drank the Ganges River, which was brought to the Earth planet by Bhagiratha Rsi. Jahnu Rsi then released the Ganges from his thigh, so Ganga-devi is also known as Jahnavi devi.

We then went to the place of bhajana of Sri Saranga Thakura. In his old age, Saranga Thakura was ordered by Mahaprabhu to make disciples, to assist him with his services. He replied that there were no qualified disciples. Mahaprabhu told him that he (Saranga Thakura) can make them qualified. Because of Mahaprabhu’s insistence, he vowed to accept as a disciple the first person he would see the next day. The next morning, when he went to bathe in the Ganges, he saw the dead body of a boy floating in the water. Remembering Mahaprabhu’s order, he brought that dead body to the riverbank and recited the diksa-mantras into his ear. As soon as the mantra entered his ear, the boy returned to life and became his initiated disciple.

In Treta Yuga, Lord Ramacandra, Sita devi, and Laksmana went to Mamagachi. Under the shade of a large banyan tree, Sita Devi observed that Lord Rama was smiling mildly.

She inquired, “O Lord, what is the cause of your amusement?” 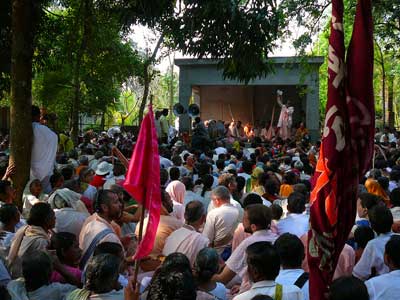 Lord Rama replied, “O Devi, this Navadvipa is very dear to Me. In the beginning of the upcoming Kali Yuga, I will come here in the form of Sri Caitanya Mahaprabhu, and You, Sita, will come here as Srimati Visnupriya. I will take sannyasa and go to Jagannath Puri.”

Then Sita asked, “O Lord, what is the reason for Your taking sannyasa?”

In prema, pure divine love, there is meeting and separation. During meeting there is external meeting, and in that happiness, the devotee forgets everything internal. But during viraha, separation, he or she remembers the pastimes of meeting. Meeting with the Lord is certainly one type of happiness, but separation is another type of happiness. Therefore, sadhakas (practitioners of devotion to Sri Krsna) in this world perform bhajana in the mood of separation by remembering the pastimes of Sri Sri Guru and Gauranga.

What is the condition of Srimati Radhika when Krsna went to Mathura and Dvaraka? The prema of Radhika is not expressed directly; it is not straightforward. It is very crooked, and therefore it binds Sri Krsna. Especially regarding the condition of maan, transcendental jealous anger, Candravali will not directly express displeasure or say anything contrary at that time. But Radhika may say many things, and Krsna becomes controlled by Her type of maan. A river is not very beautiful when it has only a few waves, but the ocean is very attractive because it contains so many astonishing varieties of waves.

Similarly, in separation there are many wonderful and astonishing moods felt by both the Lord and His beloved. Moreover, the meeting that occurs after separation is especially relishable.

Now Lord Rama told Sita, “O Devi Sita, your father took a vow to marry You to that person who could lift the bow of Lord Siva. Many powerful kings like Ravana came, but they could not lift it. I also came with Laksmana at that time, and that was Our first meeting – in the garden of Janaka Maharaja.”

At that time, Lord Rama and Sita exchanged glances and both captured each other’s hearts. Soon after that, when Ramacandra lifted the bow, Sita was beside Herself with happiness. She wanted to put the vijaya mala, the ‘victory garland,’ around the neck of Lord Rama, but she was feeling such ecstasy that She could not move. Her friends had to lift Her arms and place the garland around His neck.

Later, unknown to Lord Rama, after He abandoned Sita devi, She gave birth to two sons, Lava and Kush, in the asrama of Sri Valmiki Muni. There in his asrama they learned the sixty-four arts.

They once went to the palace of Ramacandra and began to sing the Ramayana that they had learned from Valmiki. There they saw the most astonishing sight: a golden form of their mother. They did not know that their mother was Sita. As they sang the Ramayana in a very sweet voice, everyone began weeping – Rama, Laksmana, and all others.

Rama was especially attracted. He called Laksmana and said, “Please go to these boys and ask them, ‘Who is your mother and father?’” Laksmana took a big container of jewels and gold as a donation for them. Laksmana said, “Lord Rama is very pleased with you two boys. Please, we want to know who your mother and father is.”

Lava and Kush replied, “Oh, considering that You are a brother of Lord Ramacandra, You are not very intelligent. We are brahmacaris, so why are You asking who is our mother and father? All we know is that our Gurudeva is Sri Valmiki; that is all we know. We also have no need of these jewels and gold and silks. We live in the forest and eat roots, shoots, and fruits; we have no need of these at all. If we need some cloth, we take some bark from the trees.”

That day, Lava and Kush returned very late to the asrama of Valmiki. Because they did not know that Lord Rama was their father and that their mother was Sita devi, they said to their mother, “O Mother, today we saw a most astonishing thing. As we sang the Ramayana, and all were vastly attracted, we saw that King Rama had a golden form of a woman who is the exact replica of You.”

Hearing this, Sita began to weep. She could understand that although the King has left the Queen, Rama has not left Sita. She wept bitterly.

During Her separation from Lord Rama when He was in Ayodhya and She was in the asrama of Valmiki Muni, Sita was absorbed in remembering the happiness of Her first meeting with Him, the happiness She felt upon placing the victory garland around His neck, and so many other pastimes with Him. All these pastimes that took place in meeting, She remembered in separation.

When Sri Krsna went to Mathura and then to Dvaraka, Radharani experienced mohan, or mohanakhya-mahabhava, and in divine madness, She chastised a bumblebee. In separation from Krsna, Srimati Radhika sometimes embraces a tamala tree or the darkness. Therefore, in vipralambha, separation from Krsna, there is great remembrance of the happiness of meeting with Him.

Srila Visvanatha Cakravarti Thakura and Srila Sanatana Gosvami have said that the happiness of separation dances on the head of any happiness that is experienced in meeting. 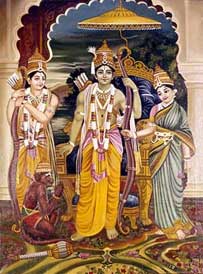 Lord Rama now told Srimati Sita-devi, “O Devi, I will come to this Navadvipa. I will take birth from the womb of Mother Saci, and I will take sannyasa and go to Jagannath Puri – and You will stay here in Navadvipa and worship My murti (divine, worshipful statue).” That murti is here in Navadvipa; it is known as Sona Gauranga.

Separation is such a wonderful thing. Both the devotee and the Supreme Lord taste the astonishing waves of meeting and separation.

Tomorrow is the Janma-utsava (Appearance Day Festival) of Sri Caitanya Mahaprabhu. To respect the Lord, the devotees observe a complete fast until abhiseka (the auspicious bathing ceremony of the Deity), which is at 6 p.m. After Mangala Arati tomorrow, the devotees will begin continuous reading of Sri Caitanya Bhagavata here.