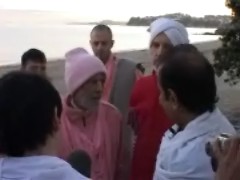 [Venu-gopal dasa:] If such a great devotee like Uddhava could not pass the gopis' ‘entrance examination', to see if he was eligible to learn how to get prema like theirs, how can I hope to get such prema?

[Srila Narayan Gosvami Maharaja:] He is a siddha-bhakta (a devotee already at the stage of perfection), so he cannot attain a new relationship with Krsna. But we are now independent. [We are free to endeavour for that prema -ed] If, by serving and hearing from a rasika tattva-jna Vaisnava, you will develop greed for serving the gopis and the Divine Couple Sri Sri Radha Krsna, then, by devotional practices you can go to Goloka Vrndavana. One can even attain the state of enjoying the rasa-dance with the gopis, to serve Them there.

[Pujyapada Padmanabha Maharaja:] Srila Gurudeva, in that connection, we hear that Sri Narada Muni, who is also siddha (situated in his eternally perfect spiritual body), performed so many austerities at Narada Kunda, and he attained the body of a gopi. He was already siddha and yet he attained it, so why can't Uddhava get it?

[Srila Narayan Gosvami Maharaja:] Uddhava will not attain a gopi body. Narada eternally has so many forms in all the sweet pastimes of Krsna. In one form he is Madhu-mangala (Krsna's cowherd-boy friend). In a second form he is Naradiya gopi; in another form, in Vaikuntha, he is with Lord Narayana; and he has another form in Svarga (heaven), with the demigods. He has so many eternal forms.

[Srila Narayan Gosvami Maharaja:] But others - like Nanda Baba and Yasoda, Vasudeva and Devaki, Uddhava, and Akrura - cannot add other rasas to their already eternally existing rasa.

If one has a sthayi-bhava (the foundational ecstasy of a particular relationship with Krsna) in only one mood, he will always be in that one mood.

In the beginning of one's devotional practices, by hearing about the Lord's pastimes, one my want to serve Sri Sri Radha-Krsna and he may also want to serve Sri Ramacandra. In that case he will think about Rama and His associates like Hanuman, Bharata, and Laksmana, and he will also meditate on Sri Krsna's pastimes with His sakhas, or with Nanda Baba and Yasoda, or with the gopis. In other words, in the beginning one is not situated in his permanent relationship, so one will sometimes be attracted to a particular relationship when he hears about it, and at other times one may become attracted to another service relationship when he hears about it.

[Dhruva dasa:] Gurudeva, does the soul somehow separate to be in two forms in two pastimes?

[Srila Narayan Gosvami Maharaja:] Krsna is akhanda-tattva. Akhanda means undivided, or whole. So how can He manifest in millions of forms? We cannot imagine anything inconceivable, even in this world. How have the trees come? Seeds come from trees, and trees again come from seeds. Flowers come and leaves come. How? We cannot imagine this. So, everything about Sri Krsna is inconceivable.

[Srila Narayan Gosvami Maharaja:] Yes. For example, Mother Yasoda has unlimited forms. Wherever Krsna is, she is. This is true for Nanda Baba also, and for Madhu-mangala and all of Krsna's other associates as well. But their rasa (their particular relationship with Krsna) will be the same.

[Venu-gopal dasa:] Gurudeva, This is my friend James. This is his first time meeting you and the Vaisnavas. He is a school teacher.

[Srila Narayan Gosvami Maharaja:] (To James) Try to understand this philosophy- that you are not this body. Are you your body?

[Srila Narayan Gosvami Maharaja:] This body is a bag of stool, urine, blood and so many other nasty things. After some time you will become old and give up this body. At that time, whatever you are earning, you cannot take a single farthing with you; and your body will be placed in a burial ground. Where will you be after that?

So there is soul. It is due to the presence of your soul that you are living, coming, going, and thinking. If the soul goes, the body will go. You are soul.

[Balarama dasa:] In the mangala arati song, Srila Bhakti Prajnana Kesava Gosvami Maharaja describes how Vrnda-devi called all the parrots to wake up Sri Sri Radha and Krsna from their sleep. Why did he write about the pond after that?

["In the pond, which is filled with many varieties of flowers, the lotuses sway in the center. The breezes spread their auspicious aromas in all directions, bringing pure delight and joy to all." (Verse 7)

[Srila Narayan Gosvami Maharaja:] It is all right. This description can be after Their awakening.

[Balarama dasa:] But They are running to go back home so that nobody discovers Them.

[Srila Narayan Gosvami Maharaja:] No, no. They are still engaged in their sportive pastimes at that time, and after that, They will continue to sport.

[Balarama dasa:] They don't have to go back home?

[Srila Narayan Gosvami Maharaja:] Vrnda-devi will again tell so many parrots and other birds, as well as peacocks, [the song says, "mayura sukadi sari kata pikaraja"] and finally an old monkey will come. Then They will leave for Their homes.

Better to try to remove anarthas and all material attachments first, otherwise so many difficulties will come in our spiritual lives. So many Iskcon leaders went to Radha-kunda babajis. The Radha-kunda babajis gave them so-called siddha-deha and told them, "You should remember all the intimate pastimes of Radha and Krsna." And they began to do so. Then, after some time, they got some ladies, began to live with them, and they begot children.

So, only when you come to an advanced stage, then you can remember. You should know about the Lord's pastimes but don't try to do anything artificial. The ability to properly meditate will come automatically.

[Devotee:] Gurudeva, can you give an explanation on the verse:

["Therefore material senses cannot appreciate Krsna's holy name, form, qualities and pastimes. When a conditioned soul is awakened to Krsna consciousness and renders service by using his tongue to chant the Lord's holy name and taste the remnants of the Lord's food, the tongue is purified, and one gradually comes to understand who Krsna really is." (Caitanya-caritamrta, Madhya-lila, 17.136)

[Pujyapad Madhava Maharaja:] By chanting His name, and serving Guru and Vaisnavas - then He will manifest in our hearts.

[Srila Narayan Gosvami Maharaja:] This is because Krsna, His name, His form, His qualities - everything about Him - is transcendental and beyond the limit of the mind or any other sense. So you should try to chant the holy name. Then, gradually, when you will become qualified to remember these pastimes, they will come automatically - by chanting.

[Pujyapad Madhava Maharaja:] By the mundane mind or mundane senses, it is not possible at all.

[Jagannatha dasa:] Srila Gurudeva, you said that one should not remember pastimes artificially. But vaidhi-bhakti is artificial. Did you mean something else by that?

[Jaganatha dasa:] But in vaidhi-bhakti, sometimes one has to force himself to think and act properly.

[Devotee:] What do you mean by artificial?

[Jagannatha dasa:] So forcing oneself to do the right thing in vaidhi-bhakti is not artificial. Thank you.

[Balarama dasa:] Is there a reason that we take our shoes off when we offer our obeisances?

[Balarama dasa:] Well, it depends. If somebody comes to me with your maha prasadam, I will take that straight away.

[Srila Narayana Maharaj:] This is a special case.

[Srila Narayan Gosvami Maharaja:] We should take off our shoes and then offer obeisances. If you are not allowed to take shoes to the altar when you are worshiping the Deity, how can you offer your dandavats to Gurudeva and Vaisnavas with your shoes on?

If you do not take your shoes off at the time of offering obeisances, bhakti will at once run away. Bhakti-devi will think, "He is neglecting me." Try to learn all these principles by seeing the activities of elevated Vaisnavas. Watch their dealings.

[Markandeya Rsi dasa:] I'm travelling and trying to make videos of your hari-katha. In order to capture the essence of what you are giving, and edit everything together for the video in a way that devotees can be benefited, some mercy is needed. I don't have such qualification that I can witness what is happening in that spiritual world when you are making that offering. I wish that, maybe, some time in the far future, I will be able to witness that.

In Vrndavana, during Kartika parikrama, a devotee told me that he was witnessing how you are making elaborate offerings of souls. You are offering everyone and everything to the lotus feet of Srimati Radharani. But now there is a question: If I am going to be able to capture this offering on video, I think that it will have to be by the mercy of Srila Prabhupada, and Srila Gaura Govinda Maharaja, and you, Srila Gurudeva - that even the impossible can become possible.

[Srila Narayan Gosvami Maharaja:] I am not distributing this [one's realization of one's relationship with Srimati Radhika and being offered to the service of Her lotus feet by Sri Guru]. I am simply telling about it as ‘knowledge'. The devotee should practice the devotional process - just as Srila Bhaktivinoda Thakura, Srila Rupa Gosvami, Srila Sanatana Gosvami, and Srila Raghunatha dasa Gosvami practiced. Do you know Srila Raghunatha dasa Gosvami? What did he do? What type of prasadam did he use to take? Did he take delicious prasadam?

[Balarama dasa:] He took one leaf cup full of buttermilk every three days.

[Srila Narayan Gosvami Maharaja:] When he was in Jagannatha Puri, he used to eat rotten rice that even the cows rejected. He used to wash it and then eat it. So, first be renounced enough from material desires to be able to act like this, and then meditate on the Lord's intimate pastimes.