Who Can Show Mercy? 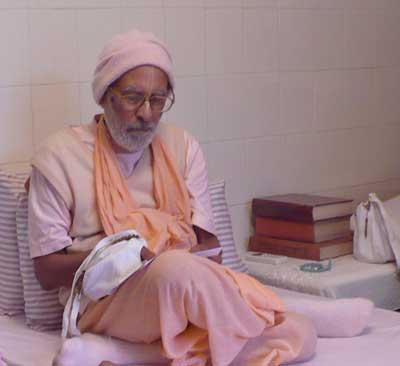 During the first two weeks of April, 2008, Srila Narayana Gosvami Maharaja visited Hong Kong and held a beautiful harikatha festival there. In the evenings he gave discourses on various transcendental histories from Srimad-Bhagavatam, wherein he discussed pure devotional service to the Lord, and the processes to achieve it. During the daytimes he engaged in his translation work, replied to letters from disciples and newcomers on the path of devotion, and also gave his kind audience to the visiting devotees. The following is a transcription of some of those meetings.

April 9th, after the morning walk

[Srila Narayana Gosvami Maharaja:] A kanistha devotee will say, "Oh, he's Guru. Come; I'll take you to him." He is like a vartma-pradarsaka guru (the guru who shows the way). A madhyama-adhikari will help others by his hari-katha. He has four duties. He can help more than the siddha. [It is rare to meet an Uttama-adhikari -ed]

[Devotee:] Srila Bhaktisiddanta Sarasvati Thakura is siddha. He was never conditioned, but still he is helping others.

We may say that he is nitya-siddha. Srila Rupa Gosvami and Srila Sanatana Gosvami were also nitya-siddha, but they have come here to help all.

[Sripad Madhava Maharaja:] They came by the desire of Krishna.

April 11th, after the morning walk

[Sripad Damodara Maharaja:] Only the sadhana-siddha is acting as Guru?

[Brajanath dasa:] Maharaja understands that in order to be Guru and give mercy, one must be a sadhana-siddha devotee. One cannot be nitya-parikara (an eternal associate of the Lord who was never conditioned).

[Sripad Damodara Maharaja:] It says that in Madhurya-Kadambini.

[Srila Narayana Gosvami Maharaja:] Srimati Radhika sent Her nitya-siddha associate, Jayanta, to help Gopa-kumara; so it may also be that a nitya-siddha can act as Guru.

[Sripad Damodara Maharaja:] Nitya-siddhas have no experience of suffering, so they cannot understand the sufferings of the conditioned souls.

[Srila Narayana Gosvami Maharaja:] The sadhana-siddhas remember what they have experienced in their life of sadhana (devotional practices before attainment of perfection). Even if they are now siddha (perfect), they can remember. It is like a man who was sleeping and suffering in a dream. Even after he has awakened, he can remember his dream. Similarly, these self-realized persons can remember how they suffered, and their hearts melt for the suffering conditioned souls.

[Sripad Damodara Maharaja:] Whereas the nitya-siddha has no suffering.

[Sripad Damodara Maharaja:] They do not know what suffering is.

[Srila Narayana Gosvami Maharaja:] Who? Srila Sanatana Gosvami? How would his heart melt and how would he do what he is doing?

[Sripad Madhava Maharaja:] Look at Srimati Radharani - how much suffering Her family caused her!

[Srila Narayana Gosvami Maharaja:] Yes, and Sri Gadadhara Pandita also made so many disciples - like Mamu Thakura and Bhugarbha Gosvami and those in their line. He even gave mantras to Sri Vallabhacarya.

[Sripad Damodara Maharaja:] I was thinking that nitya-siddhas only came with Sri Caitanya Mahaprabhu.

[Srila Narayana Gosvami Maharaja:] No, no. Whatever Sri Krsna and Sri Caitanya Mahaprabhu think best to do, that is what They do. They may bring their own personal eternal associates who were never previously conditioned souls, or they may bring sadhana-siddha devotees with them.

[Sripad Damodara Maharaja:] How can we know who is sadhana-siddha or nitya-siddha?

[Srila Narayana Gosvami Maharaja:] First you should be siddha, and then you can realize who is who.

[Syamarani dasi:] Gurudeva, in a few days it will be Lord Ramacandra's Appearance Day. Today we are sending out your hari-katha from Navadvipa at Mamagacchi, where you discussed the separation between Srimati Sita-devi and Lord Rama. You said that at the time of meeting, one forgets everything internally. What does that mean? Even at the time of meeting there are so many moods.

[Srila Narayana Gosvami Maharaja:] If I am meeting with you and speaking, and we are engaged in some activity, we will forget what is inside.

[Syamarani dasi:] Aren't there so many internal feelings as we are speaking?

[Brajanath dasa:] You forget the heart when you are externally absorbed in so many things.

[Srila Narayana Gosvami Maharaja:] At the time of meeting, Srimati Radhika forgets the internal, and externally She is speaking with Krsna and doing so many things. But separation is always internal. At that time She is always thinking internally and forgetting the external.

[Syamarani dasi:] It is an internal feeling, isn't it?

Later that morning, darsana for the Philippine devotees 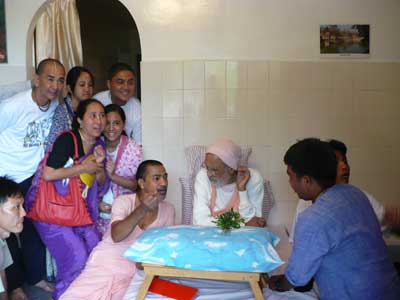 [Syamarani dasi:] When Yadhunatha prabhu and his good wife Gaurangi were in Iskcon, they were full-time travelling preachers. They were married, but they were preaching together. Then they had two children, and from that time until now their time has been mainly spent in maintaining the family, to help the children grow. Now the children are teenagers (13 and 14 years). Is now a good time for the children, who have become wonderful devotees, to assist the parents in preaching?

[Syamarani dasi:] How can the children get over their fear of preaching?

[Srila Narayana Gosvami Maharaja:] No need of shyness at all; no need.

[Krsna-candra dasa:] Gurudeva, I travel all over the Philippine Islands, trying to explain to people how to become Krsna-conscious. Can you instruct me about the best way to do this?

[Srila Narayana Gosvami Maharaja:] Try to understand our classes. Also, read my books and the books of Srila Bhaktivedanta Swami Maharaja. And preach freely, without any fear. In this way they will appreciate you, and they will come to me for initiation.

[Pitambara dasa:] Gurudeva, how did Radharani exit the pastimes?

[Srila Narayana Gosvami Maharaja:] Srimati Radharani left in the same way that Sri Krsna left - by the arrangement of Krsna's Yogamaya potency. When Krsna returned to Vraja from Dvaraka on a chariot, He stayed for some time and then Krsna and all his Vraja associates - Nanda baba, Yasoda-maiya, all the sakhis including Radhika, Lalita, Visakha, and Candravali, and all His other associates - became aprakata (un-manifest here in this world). Vasudeva Krsna (Krsna as the son of Vasudeva) then got back on His chariot and returned to Dvaraka alone. Later on, in His own transcendental form, He ascended to His abode, Goloka Vrndavana, before the eyes of demigods like Lord Brahma and Sankara. *[See endnote 1]

While Sri Krsna was still present in Dvaraka, it seemed as though all His sons and other relatives, like Pradhyumna, Anirudha, and so many others, fought with and killed each other. However, this was like magic show. It was simply an external exhibition. Krsna entered Goloka-Vrndavana with all His eternal associates. Those who had come from Svarga (the heavenly planets) to participate in His pastimes, like Indra and other demigods, returned to Svarga after His pastimes were completed. There, they mixed with Indra and the other demigods. [In other words, the demigods had expanded themselves to become the members of the Yadu dynasty (the family members of Krsna in Dvaraka). At the end of the pastimes, the portions of the demigods who were in the Yadus dynasty mixed again into their own demigod forms. -ed] Those who had come from Ayodya returned there, and all those who had come from Vaikuntha returned there.

[Devotee:] Gurudeva, some people have asked my wife to do some preaching in schools, for children. We want to know if we can have your blessings to do that.

[Srila Narayana Gosvami Maharaja:] You should go everywhere - to schools, colleges, universities, door-to-door - and preach. You are qualified, more so than your husband. You can preach. My blessings. Try to preach everywhere with him. It is not that you should always be writing. I also write, and I am also preaching so much all over the world.

[Radha Kanta dasi:] When Srimati Radhika left Vrndavana, She entered the Yamuna, didn't she? She apparently gave up Her body in the Yamuna?

[Srila Narayana Gosvami Maharaja:] No. Srila Rupa Gosvami has described it in this way: Radhika entered the Yamuna, but from there She went (via the Sun planet) to Dvaraka *[See endnote 2]. All the sakhis, Lalita, Visakha and all others, also went to Dvaraka - they became Rukmini, Satyabhama, Jambavati, and so on. Later on they met Krsna; and in the end they understood that they were really from Vraja. We also see in Lalita-Madhava that Srimati Radhika jumped into a lake to end Her life due to separation from Krsna, but Krsna then entered the lake and embraced Her. So many pastimes are revealed in Lalita-Madhava and Vidagdha-Madhava; you can read such pastimes there.

[*Endnote 1 - The idea is that the demons saw that He died and left a body behind, the demigods saw Him ascend, in His transcendental form, through the heavens to His Spiritual abode. Regarding His eternal associates, they did not see anything because their pastimes just became un¬-manifest to us, but continued as normal for them. -ed]

* Endnote 2 - It is written in Lalita-Madhava that when Sri Krsna went to Mathura and Dvaraka, Srimati Radhika was in such a deep state of separation that She went to Khelanvana, where She entered the waters of Yamuna and drowned. Then, through the rays of the sun, She went to the sun-planet, Surya-loka. The author, Srila Rupa Gosvami, is silent about what transpired between that time and Her arrival as Satyabhama in Nava-Vrndavana, Dvaraka; but he explains that once there, She met Rukmini.

Rukmini thought, "Oh, this young girl is so wonderfully beautiful! If Krsna sees Her, He will be attracted to Her and He will no longer love me as He does now." She tried to keep Satyabhama hidden from Krsna, hoping to prevent Him from seeing the new girl from the sun-planet. Nevertheless Krsna saw Her, and He fell in love with that young lady at once.

Because Rukmini continued her attempt to stop the two of Them from meeting, Satyabhama felt such painful separation from Krsna that She went to the Kaliya Lake in Nava-Vrndavana with the aim to be bitten by the poisonous serpents there. She jumped into the lake, and unbeknown to Her, Krsna jumped in after Her. He caught hold of Her from behind, and Satyabhama thought with relief, "Oh, here are two very black snakes full of poison, and they are about to bite Me. But why are they not biting Me?" She was thunderstruck. She could not imagine that Krsna was holding Her, until He turned Her around to face Him. Seeing Him, She came to her external senses and fell on His chest.

Rukmini saw this and thought, "Oh, I tried so hard to separate them, so that they would not see each other, but I was not successful. Now they should be married."

Krsna then proposed to Satyabhama and at last they were married.

Who is the young girl who travelled by the rays of the sun to Nava Vrndavana in Dvaraka? And who went to Kuruksetra to meet Krsna?

This is a significant point. The explanation is that there are three features of Srimati Radhika. One of them, Her complete feature, is the daughter Vrsabhanu-nandini Kirtida-kanya.]