Always Think of Me 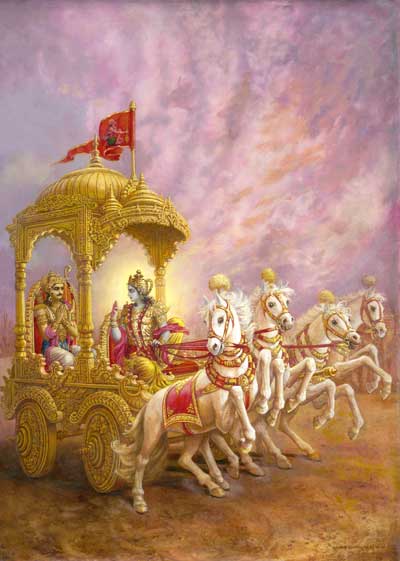 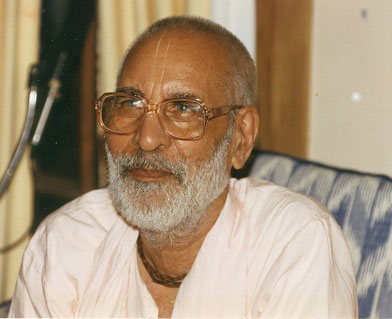 [Submitted by Madhuvrata dasa: On Saturday November 28th, 2009, on the auspicious day of Ekadasi, Srila Gurudeva attended the International Conference on Bhagavad-gita and Sri Gita Jayanti held at the Rabindranath Tagore Institute. Inside the auditorium he was introduced to many high-profile persons including government ministers and pandits from Mauritius. After the welcome address and a speech by The Hon. Mr. Anil Bachoo (minister of infrastructure, transport, and shipping), Srila Gurudeva was invited to speak. He honored all present to hear him, received flower garlands and gifts, and then gave the following lecture. The transcription of this lecture was kindly translated from Hindi by Acyutananda dasa:]

“I am experiencing great happiness that I have been invited to speak a few words in this assembly of scholars on the occasion of Gita Jayanti. I have been allotted a very short time, only fifteen minutes; regardless, I will try to speak something. Especially here, the majority of residents of Mauritius are related to the part of India known as Bhojpur (Bihar). My birth and early education took place in a village on the banks of the Ganga in this same region of Bihar. I am especially happy that although I am speaking Hindi you will all be able to understand.

“The incarnation of Bhagavan, the guru of the entire universe, Srila Krsna-dvaipayana Vedavyasa, is the propagator and composer of a large book entitled Mahabharata. In that Mahabharata, at the beginning of Bhisma-parva 42nd chapter, Bhagavad-gita is gloriously situated in eighteen chapters.

‘Why did the Gita become manifest? Gita is one of the Upanisads; in other words the essence of all the Upanisads has become this Gita.

“All the Upanisads are likened to cows, and the milkman of these cows is the Supreme Personality of Godhead Himself, Sri Krsna. Partha (Arjuna) has taken the form of a baby calf. To benefit the entire universe, this Gita, which is equivalent to nectar, has thus become available for the benefit and auspiciousness of the entire universe.

“One special matter: Arjuna is an eternal associate of Krsna; he can neither be enchanted by the illusory energy nor have any doubts. But Krsna, in order to give us this transcendental knowledge and to give devotional love of God, inspired Arjuna to ask questions regarding auspiciousness for the universe.

“Just now, a previous speaker explained that the first and foremost subject in spirituality is to understand that we are not the body. The body, either today, tomorrow, or the day after will eventually become old. Not even the entire world's doctors and scientists will be able to stop this for even one minute, and in the end there will be death.

“‘The living entities in this conditioned world are My eternal fragmental parts. Due to conditioned life, they are struggling very hard with the six senses, which include the mind.’ (Bhagavad-gita, 15.7)

“The living entity is the separated part of the Supreme Lord and can never become one with Him. Rather, having attained knowledge and love for Him, the jiva will eternally serve Him in Goloka Vrndavana. The jiva will go to such a place where having once gone shall never return.

“’That supreme abode of Mine is not illumined by the sun or moon, nor by fire or electricity. Those who reach it never return to this material world.’ (Bhagavad-gita, 15.6)

“This is the original meaning of the Gita.

“Especially, I want to say one thing. The scriptures have proclaimed that if the Bhagavad-gita is to be understood, one must first of all become fixed in the understanding that Krsna, the speaker of this Gita, is the Supreme Lord Himself. Whatever He has said, that is the highest truth; there is not even the slightest fragment of untruth in His words. Those who follow His instructions after having heard them, and inspire others to do the same, will attain the ultimate benefit. They will obtain eternal perfection.

“Krsna Himself has said:

“’O conqueror of wealth, there is no truth superior to Me. Everything rests upon Me, as pearls are strung on a thread.’ (Bhagavad-gita, 7.7)

“Everything emanates from Krsna. Sri Rama, Nrsimha, Kalki, Vamana, and all other avataras emanate from Him. Evidence for this is found in the Srimad-Bhagavatam:

“Therefore, please first understand that Krsna is the Supreme Lord, and His speaking to Arjuna was the means for propagating His philosophy. The Gita is not only for one specific time period; it is for all times. It is beginningless, endless, and eternal. As many problems as are possible in the cycle of birth and death, their solutions are to be found in the Gita.

“In our land of India and outside as well, the Bhagavad-gita is very well respected. Sri Sankaracarya, Ananda Giri, and Madhusudhana Sarasvati have written famous commentaries on it. In addition, Sri Ramanujacarya, Sri Madhvacarya, and Sridhar Svami have written commentaries.

“In the commentaries of Ananda Giri and Sankaracarya, the truth has been concealed and the monistic doctrine is prominent. Misinterpreting such Vedic statements as sarva khalvidam brahma, aham brahmasmi, and prajnanam brahma, they explain that the living entity is himself brahma, Having ripped apart the meaning of the Gita, they, as well as others from their sampradaya, have attempted to establish monism. However, Sri Ramanujacarya, Sri Madhvacarya, and Sridhar Svami have explained that the Gita propounds devotional service.

“There is one special thing to note: Following in the footsteps of our acaryas, we accept the philosophical doctrine of acintya-bhedabheda. I am speaking from the commentaries of the acaryas in our tradition, who propounded acintya-bhedabheda tattva, such as Srila Visvanatha Cakravarti Thakura and Sri Baladeva Vidyabhusana.

‘This Gita, as I have previously mentioned, is spoken by Krsna Himself, who says:

“’This divine energy of Mine, consisting of the three modes of material nature, is very difficult to overcome. But those who have surrendered unto Me can easily cross beyond it.’ (Bhagavad-gita, 7.14)

“Those who perform worship of Me, will be delivered.

“’From the highest planet in the material world down to the lowest, all are places of misery wherein repeated birth and death take place. But one who attains to My abode, O son of Kunti, never takes birth again.’ (Bhavagad-gita, 8.16)

“Those who will surrender to Me will attain the highest good.

“’Abandon all varieties of religion and just surrender unto Me. I shall deliver you from all sinful reactions. Do not fear.’ (Bhavagad-gita, 18.66)

“Why has ‘mam ekam’ been stated three times? Just as the phrases in the verse ‘harer namaiva herer kevalam, kalau nastyeva nastyeva nastyeva’ have been told three times to emphasize the point, so it is with this Gita verse. In this verse Krsna has said ‘mam ekam,’ ‘ma sucah.’ And ‘aham tvam.’ The firm absolute truth is this.

“’Krsna, who is known as Govinda, is the Supreme Personality of Godhead. He has an eternal, blissful, spiritual body. He is the origin of all. He has no other origin and He is the prime cause of all causes. He has no origin.’ (Brahma-samhita, 5.1)

“’How greatly fortunate are Nanda Maharaja, the cowherd men and all the other inhabitants of Vrajabhumi! There is no limit to their good fortune, because the Absolute Truth, the source of transcendental bliss, the eternal Supreme Brahman, has become their friend.’ (Srimad-Bhagavatam, 10.14.32)

“Krsna is the complete brahma (Spirit Whole), as proclaimed by all the scriptures. Not only the scriptures; Devarsi Narada, Asita, Devala, Vyasadeva, and Sukadeva all consider Krsna to be the Supreme Lord.

“Therefore the Gita, which is told by Krsna, gives auspiciousness of the entire universe. Having heard it, people may cross over the ocean of birth and death. Time is short, and therefore I am speaking in brief.

“Now, sarva-guhyatama-jnana, the topmost confidential knowledge, has been explained in this verse:

“’Always think of Me, become My devotee, worship Me and offer your homage unto Me. Thus you will come to Me without fail. I promise you this because you are My very dear friend.’ (Bhagavad-gita, 18.65)

“Man mana bhava’ means, ‘Give your mind to Me; absorb your mind in Me.’ Our commentators have given an example. In Vraja, a young cowherd girl was newly married and had come to Nandagaon. She has heard a great deal about Krsna and His wonderful pastimes, but she had not yet seen Him. She wanted to see Him up close.

One day Krsna was taking the cows and calves grazing. Because He resides in everyone's heart, He was aware of the girl’s desire and considered, ‘This cowherd girl wants to see Me from close by. He grabbed the tail of a calf and it ran, followed by Krsna Himself, right up to where she was standing. He then touched His flute to her chin and left.

“Prior to this her in-laws were asking her, “Where are you going?” She replied, “To see Krsna.” They told her, “Don't go, otherwise a black snake will bite you.” She replied, “Why should I not go? You yourself, your daughter, and others from here are going. Somehow I must also go there.”

She did not listen to them. She came to see Krsna, Krsna stole her heart, and she became ‘man mana bhava.’ She completely stopped thinking about herself and simply continued standing there.

“Some time passed. Her mother-in-law approached her and said, ‘Didn't I tell you that the black snake would bite you? You did not listen, and finally He bit you.’

“Now her mother-in-law placed upon her head a clay pot, on top of that another, and on top of that one more. This is the pastime of Vraja wherein women take two or three clay pots on their head to fill them with water for their houses. In one hand the girl carried a rope to place around the clay pot for fetching water, and she was given a small baby to take along with her. She was told, ‘Go and fetch water from the well.’

“She went to the well with the pots and the rope, and the child. Her mind was not present with her, so she wrapped the rope around the neck of the child instead of the pitcher, and began to lower the child into the well. Alarmed, others standing nearby exclaimed, ‘Has a ghost stricken this girl? She has put the rope (for the pot) around the child!’ Someone said, ‘Bhuta nahi, bhuta nahi, Nanda Ji ke putra’ - No, it is not a ghost; it is the son of Nanda. He has entered her in such a way that none of her sense has remained!’ Thus, they stopped her from lowering the child in the well. This is man mana bhava. 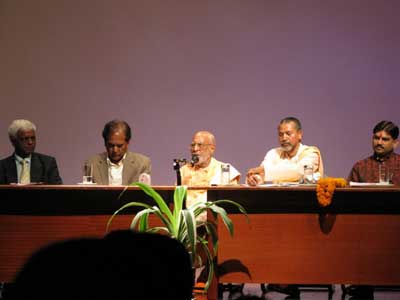 “Further explanation will become long; therefore I have kept my presentation brief.

“’Mad yaji’ means ‘perform My worship.’ Arjuna told Krsna, ‘I cannot worship You when I have to concentrate on the war. Please make it easier for me.’ So in the end Krsna said, ‘Namaskuru’ – one time offer your obeisances to Me. What does it mean to offer obeisances? ‘Na’ means ‘without,’ ‘mas’ means ‘false ego,’ and ‘kara’ indicates ‘offer pranamas to Me.’

“Much time has passed, and for that I ask your forgiveness. Today I will end my speech here.

I offer pranamas unto the Vaisnavas, who are just like wish-fulfilling desire trees, who are an ocean of mercy, and who deliver the fallen, conditioned souls.”