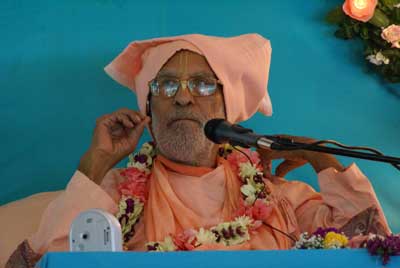 [It was at this Badger festival that Srila Maharaja told the devotees that – after fourteen years of visits – this would be his last visit to Badger. Preparing the devotees for the proper moods of separation from himself, he chose a Harikatha topic dealing with separation. The following is a continuation of that series of Harikatha. After Krsna's kumara, paugunda, and kisora pastimes in Vraja, Krsna and Balarama lived in Mathura and afterwards in Dvaraka. Soon after Krsna arrived in Mathura, He and Balarama attended Sandipani Muni's Gurukula in Avantipura, modern-day Ujjain. The setting of this lila is just after Krsna and Balarama returned to Mathura from Sandipani Muni's Gurukula.]

Krsna has now returned to Mathura from Sandipani Muni's gurukula. One day, having ascended to the roof of His palace in Mathura, He looked towards Vrndavana. Weeping, He was remembering past days, when He was in Vraja.

In the meantime Uddhava appeared there on the palace roof and approached Krsna, who took his hand in His own hand.

"Uddhava," Krsna said, "You are My friend and advisor, and you are a disciple of Brhaspati. Brhaspati taught you all sastra, but he does not know prema-tattva, the fundamental truths of the pure, unalloyed love, and thus he could not impart this to you.

"I want to send you to the school of prema in Vrndavana, where I too learned prema. Please go there and convey the messages I will now give you for the Vrajavasis there. They will be satisfied only by My words; your words will not do."

Uddhava thought, "Krsna is sending me to Vraja, but I cannot remain anywhere, for even a moment, without Him."

Krsna assured Uddhava, "When you go there you will see that I am partly in Mathura, but I am fully in Vrndavana. So don't worry about being separated from Me."

Krsna continued, "The gopis in Vraja console each other, and thus their suffering due to My separation is somewhat mitigated. On the other hand, no one here in Mathura is qualified to understand – and thus participate in sharing – My suffering; therefore My suffering knows no consolation. No one here knows Vraja-katha; no one here knows about the love and affection of the gopis, Mother Yasoda, Nanda Baba, and the other Vrajavasis.

"Go and see that I am in Vraja, associating with all the gopis and cowherd boys there, and see that everyone there is very happy. Don't hesitate. I am fully in Vraja."

Because Uddhava has almost the same bodily complexion as that of Krsna, and because Krsna gave Uddhava His own garland to wear, Uddhava looked very similar to Krsna.

As Krsna and Uddhava walked and talked, they finally approached the chariot that would be driven to Vraja, Uddhava said to Krsna,

"Please return to Your palace now. You have told me in detail all the things You want me to share with the Vrajavasis. I will tell them everything and try to inspire them."

Uddhava climbed onto the chariot and it began to drive off. As long as the chariot and the dust raised from the wheels of the chariot were visible, Krsna remained standing and watching. Then, once the raised dust could no longer be seen, Krsna returned to His palace in Mathura.

He was always remembering the love of the gopis and other Vrajavasis, and would think to Himself, "How the gopis loved Me! I would not be able to repay them, even if I would try to do so for the period of one day of Brahma's life (4,300,000,000 Earth years). And, how Baba and Mother, and all the other Vrajavasis loved Me!"

When Uddhava reached Nanda Maharaja's pastures, the sun was just setting, and because the cows and other animals returning to the village from the forest were raising dust with their hooves, his chariot passed unnoticed.

Nanda Baba heard that Uddhava had come, and he was waiting at the doorway to his palace. When he took Uddhava inside, Uddhava noticed that no cooking was taking place at all. When Krsna had left Vrndavana, the cooking totally stopped, and spider-webs now covered the kitchen and stove. What was the need of cooking? They had previously cooked for Krsna, but now for whom would they cook?

Nanda Baba sent someone to a brahmana's house, and that person brought back sweet-rice without sugar because the brahmana had no sugar. What to do? Uddhava was hungry, so he accepted and ate that unsweetened sweet-rice. Nanda Baba then called a servant and told him to massage Uddhava's feet. All arrangements were made to properly honor a valued guest.

Nanda Baba wanted to ask, "How is my dear Krsna?" but due to his mood of separation his voice choked and he began to weep. After some time, he said, "Uddhava, Krsna did not kill Kamsa. The sinful Kamsa was killed by his own sinful activities.

I went to Nandagaon, but that place told me of Krsna's sweet pastimes – the pastimes showing how Yasoda and I loved Him so much.

I went everywhere in Vraja to forget Him, but I found that there is no place for me to pacify myself." Nanda Baba was bitterly weeping."

Astonished, Uddhava thought, "Krsna told me to pacify them, but what should I tell them? If any worldly person's son was to die, I would tell that person, 'Don't worry, remember Krsna,' and that person may be pacified. But what should I tell a person who is weeping for Krsna? 'Don't weep'? All scriptures forbid me to say this. And if I say, 'Oh Nanda Baba and Mother Yasoda, weep more and more for Krsna,' I cannot foretell what would happen."

Thus in dilemma, Uddhava searched his heart for words. He thought, "Krsna has sent me here, so what shall I do in this situation?" [He conveyed to Nanda Baba Krsna's message, that Krsna would soon return to Vraja, and that He is the Supreme Lord of all the worlds.]

But no word was found In Uddhava's dictionary to pacify Nanda Baba, and in the end he concluded, "In sastra it has been written, 'Those who weep for Krsna are truly fortunate.' You are very fortunate."

Nanda Baba replied, "Uddhava, I thought that since you are a friend of Krsna and you have studied under Brhaspati, the priest of the demigods,, you would be mature. I thought that you would be a learned person, but now I understand that you don't know anything. Your intelligence is still puzzled. Your baby-teeth have yet not gone.

"There was once a father named Dasaratha. When Dasaratha heard that his son Rama had been exiled to the forest and that he was now separated from Him, he called out, 'Rama, Ha (Alas) Rama, Ha...' and then he left his body. Why is my life-air still in my body? Why is it not leaving? It must be that it is made of a thunderbolt."

In this way the entire night passed in conversation, with Nanda Baba weeping. All that time Mother Yasoda did not open her eyes, for she was weeping, weeping, and weeping.