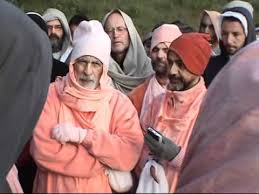 [Even if one commits the most abominable action, if he is engaged in devotional service he is to be considered saintly because he is properly situated in his determination.]

If we see that a devotee has a fall-down, we cannot say what is in his heart; whether the fall-down was accidental or pre-meditated. But if guru gives an order to that devotee for rectification and the devotee repeatedly fails to follow the order, can we still apply api cet su-duracaro, sadhur eva sa mantavya to that devotee?

Srila Narayana Gosvami Maharaja: No, he is not in that category of sadhu.

Brajanath dasa: This is Amogha-lila Prabhu, a disciple of Srila Bhaktivedanta Svami Maharaja. He knows Hindi and Sanskrit.

Amogha-lila dasa: I want to start a gurukula. My idea is that this school will attract people from other faiths as well as Gaudiya Vaisnavas. I want to make it an interfaith gurukula in which the students from other religions are invited to come and attend. They would study their scriptures and do their own religious worship there. Is this a good idea?

Sthayi-bhava dasa: Srila Gurudeva, this is my nephew Rohan. His sister is your disciple Nandini.

Srila Narayana Gosvami Maharaja: What does he want?

Chiranjiva dasa: Gurudeva, what is the proper mood for hearing hari-katha?

Srila Narayana Gosvami Maharaja: Sraddha, or firm faith. If you have sraddha, you will be able to properly hear, and you will receive the association of qualified speakers from whom to hear.

Sripad Asrama Maharaja: If a devotee has some fall-down, and his guru is giving him some instructions for rectification, but the devotee is not following those instructions and yet he continues to give hari-katha, is that hari-katha effective for the listener?

Srila Narayana Gosvami Maharaja: The result of such hari-katha will be zero, and also problems will come.

Sripad Asrama Maharaja: But one may consider that so much information is being given in that hari-katha. Is it a fact that for one who hears that hari-katha, an unfavorable effect will come in the heart?

Srila Narayana Gosvami Maharaja: Abhimana (false ego – a self-centered bodily concept of life) will come in the heart of the hearer.

Srila Narayana Gosvami Maharaja: Srila Bhaktivinoda Thakura wrote down what he realized in his heart.

Devotee: When we see the world and live surrounded by the negativity of the world, how do we not get desensitized by the evil and the mistakes of human beings on this planet?

Srila Narayana Gosvami Maharaja: For a qualified person, nothing in this world is negative and no one is an enemy. Someone will see that something is very good, and others may see in other ways. One's vision depends on one's quality of bhakti.

Haridasa dasa (from Canada): We are always asking you questions, Srila Gurudeva. Do you have any questions for me about our school (in Navadvipa)?

Srila Narayana Gosvami Maharaja: Who is there looking after them?

Nanda-gopal dasa: A lady is there and looking after them.

Haladhara dasa (from Alachua): Jaya Srila Gurudeva.
When Uddhava was sent by Krsna to Vrndavana, he found Vrndavana in dire separation from Krsna. Was Krsna also simultaneously meeting with the gopis and Nanda Maharaja and Mother Yasoda in pastimes which Uddhava was not aware of?

Sripad Madhava Maharaja: He is saying that Krsna's pastimes were going on in so many universes where Krsna was meeting with the Vrajavasis. He is asking whether or not Uddhava knew this fact.

Srila Narayana Gosvami Maharaja: If we know, how will Uddhava not know?

Nanda-gopal dasa: Would Uddhava not be covered by Yogamaya?

Srila Narayana Gosvami Maharaja: Uddhava knows that Krsna is the Supreme Lord. He is an aisvarya-bhakta, not a madhurya-bhakta; so he knows.

Kisori-mohana dasa: Gurudeva, in the abhideya-tattva chapter of Jaiva-dharma, Raghunatha dasa Babaji explains that after receiving diksa from Sri Guru, the disciple should inquire about suddha-bhakti (pure devotional service) and arcana (Deity worship). My question is: why has arcana been mentioned separately from suddha-bhakti, as if given separate significance?

Sripad Padmanabha Maharaja: Suddha-bhakti has nine limbs: sravanam, kirtanam, visno-smaranam, pada-sevanam, arcanam, vandanam, dasyam, sakhyam, and atma-nivedanam. In the practice of bhakti, all the nine limbs, including arcana, are practiced. They may also be practiced in bhakti which is not pure, but here it refers to entering the path of suddha-bhakti, uttama-bhakti.
In the performance of those nine limbs, the process of arcana is there. Not only that; in the five most important of the sixty-four limbs of bhakti, the arcana process is there – worshipping the form of the Lord. So arcana is there as one of the five most powerful processes of bhakti-yoga.

Kisori-mohana dasa: But why is it mentioned separately?

Sripad Madhava Maharaja: For beginners, arcana is emphasized in order for them to know some discipline. Arcana requires a regulated life. You have to wake up before mangala-arati, take your bath, and do your ahnika (utterance of the gayatri mantras). You cannot think, "Oh, mangala-aratika is going on, but I will keep sleeping."
When we joined the matha, arcana was the first thing Gurudeva taught us; then cooking and all other Vaisnava services. First we have to do arcana, which includes performing all our prescribed devotional activities at the proper time.

Devotee: Gurudeva, in the Third Canto of Srimad-Bhagavatam, Lord Kapila is explaining about the catur-vyuha (quadruple) expansions of Lord Krsna, namely Aniruddha, Pradyumna, Sankarsana, and Vasudeva. In the purport, Srila Bhaktivedanta Svami Prabhupada explains that Aniruddha is in charge of the mind, Pradyumna of the intelligence, and Sankarsana of the false ego. He wrote that if one worships Aniruddha one's mind is purified, by worshipping Pradyumna one's intelligence is purified, and by worshipping Sankarsana one's false ego is purified and one can become Krsna conscious.
So my question is: how does one worship Aniruddha, Pradyumna, Sankarsana, and Vasudeva? Also, is this worship required for us?

Srila Narayana Gosvami Maharaja: Something is needed for that quality of bhakta; and for those who are more qualified, there is no need.

Sripada Asrama Maharaja: Is this because all incarnations are included within Krsna?

Srila Narayana Gosvami Maharaja: Yes.
Where are you from?

Devotee: I come from Bombay and I am living in Florida.

Srila Narayana Gosvami Maharaja: Whose disciple are you?

Devotee: I am a disciple of Sripad Bhakti Svarupa Damodara Gosvami Maharaja.

Devotee: Gurudeva, if you are the successor of Srila A.C. Bhaktivedanta Svami Prabhupada, why did you write your own version of Bhagavad-gita?

Brajanath dasa: It is not his own version. It is the commentary of another acarya. Different acaryas have commented on Bhagavad-gita. One of them is Srila Visvanatha Cakravati Thakura, and another is Srila Baladeva Vidyabhusana .

Devotee: So we should read both?

Sripad Madhava Maharaja and others: Yes.

Vrndavana dasa: What is the importance of brahmana-diksa (second initiation; initiation into the regulations of Deity worship and certain other devotional principles)?

Devotee: Is the knowledge revealed in the heart, or is it heard from the spiritual master?

Srila Narayana Gosvami Maharaja: It will come from guru.

Devotee: When we sing samsara-davanala-lidha-loka in the morning, whom do we meditate upon? The diksa-guru (initiating guru), the siksa-guru (instructing guru), or the sannyasa-guru (the guru who initiates the disciple into the renounced order of life)?

Srila Narayana Gosvami Maharaja: You meditate on the guru who is most prominent for you. Diksa-guru should be meditated on, but if siksa-guru is superior in qualification, then he should also be meditated upon.

Sripad Padmanabha Maharaja: When Srila Bhakti Raksaka Sridhara Maharaja was asked the same question, he explained that if the disciple's diksa- and siksa-gurus are both elevated souls, he will consider the guru from whom he perceives he has received the most spiritual benefit to be his most prominent guru. 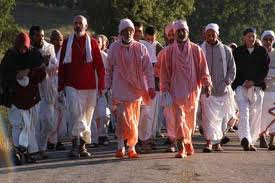 Tribhanga dasa: Gurudeva, how can I know what is best for my bhakti without having to consult you at every step?

Sripad Madhava Maharaja: Two years ago you said that loyalty is the key to success. If one is loyal to the words and instructions of Gurudeva, then he will automatically know how to proceed.

Brajanath dasa: Also, Srila Gurudeva said that if the disciple has any question and he meditates on Gurudeva, then Gurudeva will manifest the answer if that disciple is sincere.l