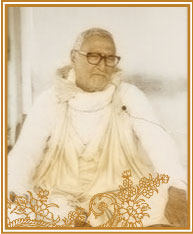 The prejudice of our past experience, caught within us in a subtle form, has covered, like dust, the eye of our soul. Our inner vision is densely covered with the dust of many different misconceptions of separate interest, causing us to ignore the universal interest.

Artheṣv abhijñaḥ svarāṭ: what is the purpose of the movement of this world? The answer is clear: “For itself”. Reality is for itself. It is not there to satisfy many, but to satisfy One. All the waves are meant to satisfy that One, and if we can put ourselves on that level, we can understand the truth. Otherwise, we are all cheaters.

We are far from the truth when we cannot see that everything, all waves, are flowing towards the satisfaction of one: Svayam Bhagavān. We are labouring under a deception. We are deceivers who are not just deceiving ourselves but the world also. We are guilty of misunderstanding everything and of carrying that false knowledge to others. Everyone, all the baddha jīvas, are more or less cheaters. That is our position, and we must be relieved of such misunderstanding, such deception of our own self, as well as of the environment, if we are to be placed in our proper position.

Then we can go there and find that universal wave, see it: darśan. Darśan means ‘to see’, and how to see, that must be learned. What to see, how to read what is going on, in myself and outside, that is proper understanding and proper education. A proper understanding of one’s own self and also of the environment is proper education. Education must be Vedic. The standard must be drawn from outside this area of māyā, misunderstanding. It must be drawn from the drawn from the perfect realm through Veda, revealed truth.

“We must accept revealed truth and bid farewell to so-called scientific knowledge and other kinds of perceptions, which are all erroneous, based on false experience and false information. “It belongs to me; it belongs to him; it belongs to them”: this calculation is all false. So we have to be relieved. We have to get wholesale relief from this mania, this misconception. And not only must we get relief from the misconception, from misunderstanding the external waves, but we must attain a positive position, to learn to understand the wave, the vibration of Goloka. Goloka is the most universal, most fundamental plane, and if we can harmonise ourselves with that plane, we will be led to Vṛndāvan, or Nabadwīp, and there we shall see things as they are.

Some are more attracted to Kṛṣṇa-līlā, others more towards Nabadwīp-līlā, and others have an inclination to be accommodated in both places. In Kṛṣṇa-līlā also some are attracted to Rādhārāṇī’s camp, some to Kṛṣṇa’s camp, and some are holding the middle position. We find this sort of division, and that is necessary for the līlā, by the arrangement of yogamāyā. So, in the highest plane, we find two kinds of Pastimes, Kṛṣṇa-līlā and Gaura-līlā, and they are of the same value. In one there is transaction within a ‘limited’ camp, and in the other there is transaction, along with a tendency towards distribution to others. But they are of the same value. That which is being distributed, and that which is being enjoyed are of one and the same value of ecstasy, sweetness, love, and beauty. Some are more attracted to the one līlā, some to the other.

Within Gaura-līlā also, we find those like Narahari Sarkār and his followers, who were more given to Kṛṣṇa than Gaurāṅga, and others who are more inclined towards Gaurāṅga than to Kṛṣṇa. This is all by the grant of the Lord, the supreme will—His līlā.

Gadādhar Dās represents the halo of Rādhārāṇī, but Gadādhar Paṇḍit represents Her mood, Her nature—Her heart.  It is as if Mahāprabhu has taken away Gadādhar Paṇḍit’s soul, and the body is still standing! That is the position of Gadādhar Paṇḍit. He is quite empty, and following Mahāprabhu. He is not full in himself. Something, the most important thing, his heart, has been taken by Mahāprabhu, so he has no other alternative but to follow Him. He is wholly given to Mahāprabhu. Gadādhar Paṇḍit’s position, the part he played, was something like that of Rādhārāṇī, Her heart stolen by Kṛṣṇa, the empty body still standing. Rādhā-bhāva-dyuti-suvalitaṁ naumi Kṛṣṇa-svarūpam: He was fully engrossed in the conception of Śrī Gaurāṅga. Gaurāṅga had taken everything from him, so he had no other alternative. He was fully engrossed, captured completely by Him.

We find his activity throughout his whole life was like this. Of the other devotees, some were ordered to go to Vṛndāvan, and some were allowed to go there, but though Gadādhar Paṇḍit wanted to visit Vṛndāvan with Mahāprabhu Himself, he was denied: “No, you won’t go.” When Jagadānanda Paṇḍit asked to go there, Mahāprabhu, with hesitation, granted him permission, “Yes, go there, but move always under the guidance of Rūpa and Sanātan.” He also gave him some special instructions: “Do this, and this, and don’t do that.” But Gadādhar Paṇḍit was not allowed to go there.

He was the representation of Śrīmatī Rādhārāṇī Herself, yet his peculiar position was such: the Queen of Vṛndāvan, but now transferred to Nabadwīp. His position had become just the opposite; he could not enter Vṛndāvan! He prayed for permission, but Mahāprabhu did not give it. He said, “No, stay and live here.” And he had to do so. Śrī Gadādhar Paṇḍit represents the predominated moeity of the Whole. The Whole consists of predominating and predominated moeities, and he represents the predominated half. He is one half of the Absolute Truth.

In the teachings of Śrīla Bhakti Vinod Ṭhākur, whose preaching was inspired by Śrī Gadādhar Paṇḍit and Śrīman Mahāprabhu, we also find all the substance that is present in that plane of vibration. These two personalities, Śrī Gadādhar Paṇḍit and Śrīla Bhakti Vinod Ṭhākur, are our great Gurus, our guides, and by offering our worship to them we can sow the seed of our highest benefit. By the grace of that great Guru Mahārāj Bhakti Siddhānta Saraswatī Goswāmī Prabhupād, we have been able to understand this.

And Bhakti Vinod Ṭhākur, though generally he has his own position, as understood from the consideration of the disciple, Prabhupād Bhakti Siddhānta Saraswatī Ṭhākur has seen Śrīmatī Rādhārāṇī in him: a ‘relative’ vision. He once said that Rādhārāṇī represents the full play of aṣṭa-nāyikā, the eight characteristics of the heroine, and we see that they are all perfectly represented in Her. In other places we may find partial representations of them, but we find them fully manifest only in Her.

He said, “I see my Gurudev as Guṇa Mañjarī, and in that mañjarī form he has some partial representation of Rādhārāṇī. But if I attempt to look more deeply, I find him identified fully with Her. The eight kinds of qualities displayed in the service of Kṛṣṇa (aṣṭa-nāyikā) are to be found there. If I look at him with my head a little more erect, I can see that he is one with Rādhārāṇī. ‘Āchāryaṁ Māṁ vijānīyāt: know the Āchārya as Myself.’ If I give more attention to this śāstric rule and try to search out the meaning, I find that Rādhārāṇī comes to take Her place there, in the position of my Gurudev.” In this way he has seen in Bhakti Vinod Ṭhākur the fullest representation of the cult of Śrī Gaurāṅga.

This realisation is expressed in his poem where he says that he saw Svarūp Dāmodar Goswāmī in Gaura Kiśor Dās Bābājī, and Śrī Gadādhar Paṇḍit in Śrīla Bhakti Vinod Ṭhākur. In one place he has written, “Gadādhara-dina dhari’ pāiyāchchhe Gaurahari.” He has accepted the day of the disappearance of Śrīla Bhakti Vinod Ṭhākur to be identified with that of Śrī Gadādhar Paṇḍit. In another place, in his poem at the conclusion of his Śrī Chaitanya-charitāmṛta commentary, he has written: “Here, in Nabadwīp Dhām, the eternal Pastimes are going on continuously. Only those who have got that deep vision can perceive it.

“He says, “It is very difficult to perceive the sweet will of Śrī Gaurāṅga, but if we can lift ourselves to that level, we see that Svarūp Dāmodar Goswāmī and Śrī Gadādhar Paṇḍit are always engaged in their service here in Nabadwīp. Sometimes it is suppressed, and sometimes it is appearing on the surface. In that plane all is going on by the sweet will of Śrī Gaurāṅga, without any restriction. But now I find that those two have appeared on the surface as Śrīla Gaura Kiśor Dās Bābājī and Śrīla Bhakti Vinod Ṭhākur. I have seen it with my own eye of divine service, but this is not to be advertised, not to be given, publicity anywhere and everywhere. People will laugh at it. But this is my heartfelt conclusion.” He has written this in his poem concluding Śrī Chaitanya-charitāmṛta.

So Gadādhar Paṇḍit was identified with Śrīla BhaktivinodaṬhākur. That was the vision of our Gurudev, Śrīla Bhakti Siddhānta Saraswatī Ṭhākur. He could see in them the same identity. He considered Śikṣā-guru-paramparā to be the most substantial thing. Eliminating the sahajiyāvād, which gives much importance to the outer cover, try to look within, and see things more deeply. Try to understand the deeper vibrations of the outside environment, and see within yourself also. Dive deep, and you will find the plane of the finest vibration which will carry that news to you, and you will see that truth.