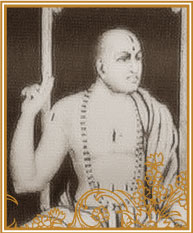 [Monday February 6, 2006 is the divine Disappearance day of Sri Madhvacarya (1238-1317 AD), one of the four vaishnava sampradaya acaryas. To mark this auspicious day we are presenting a selection of quotes glorifying Sri Madhva Muni.]

– “Srila Narayana Maharaja: Madhvacarya was a direct disciple of Vyasadeva. When Madhvacarya was living, about 4,000 years had passed since Vyasa disappeared from this world. However, Madhvacarya knew that Vyasadeva was still alive and that he is eternal. So he prayed to him in Badrikasrama, beseeching him, "I want to take your darsana and to be initiated by you." And when he was praying, at once Vyasadeva personally came there, and Madhvacarya presented his wish to him that he should grant him initiation. And then after that Vyasa disappeared. ”

– “Srila Prabhupada: Srila Madhvacarya is the original acarya for those who belong to the Madhva-Gaudiya-sampradaya.” (Srimad Bhagavatam, 6.1.40.purport)

[Srila Narayana Gosvami Maharaja:] His practice was bhakti and his aim and object was the service of the Supreme Lord in the form of Vasudeva. Which Vasudeva? He who has a churning rod in His hand. This form was also accepted by Sri Caitanya Mahaprabhu.”