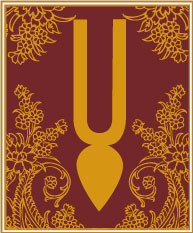 Shri Ishvara Puripada, the most prominent disciple of Shri Madhavendra Puri, had firm faith in his guru. He spent most of his time residing at his guru’s ashrama in Gaya. Chaitanya Mahaprabhu met him in the Vishnu Temple in Gaya, and accepted Vaishnava initiation from him. He was a bhavuka bhakta and an extraordinary poet, authoring the famous Krishna-lilamrita. While Ishvara Puri was in Navadvipa-dhama, he asked Nimai Pandita to correct this book. This event took place before Nimai’s diksha.
After accepting the renounced order of life, Shriman Mahaprabhu came to Kumarahatta, the birthplace of his guru, where He reverentially took some dust and placed it on His head. As Shri Ishvara Puri was leaving this world, he ordered Govinda and Kashishvara to go to Puri and serve Mahaprabhu there.

Sri Caitanya Mahaprabhu took initiation from Sri Isvara Puripada, who first gave Him harinama, and to purify that chanting of nama, he gave Him gopal-mantra. Gopal-mantra is transcendental and ever-existing, and it gives a relationship with Krsna as Gopijana-vallabha.

Sri Caitanya Mahaprabhu took initiation even though he is the Lord of lords – Radha and Krsna combined – and yet He went to Gaya and took initiation. He vividly explained this fact in a gathering of sannyasis in Kasi when those sannyasis asked Him, "O, You are a very young and qualified sannyasi. Why do you not hear Vedanta? Why do you engage in singing and dancing and rolling on the ground? A sannyasi should not dance and do all these things." Sri Caitanya Mahaprabhu replied by telling them of the order of His guru, Sri Isvara Puripada:

Mahaprabhu said, "Guru mora murkha dekhi – My Guru Maharaja told me that because I am foolish and unintelligent, I am not qualified to study Vedanta. He said that instead I should always chant Hare Krsna and I should remember this verse:

But Sri Caitanya Mahaprabhu not only took harinama from His gurudeva; He also took second initiation through the gopal-mantra. In our parampara, in order to purify one's chanting and to and give the chanter a relationship with Krsna who has kindly taken the form of His holy name, the gopal-mantra is given along with harinama.