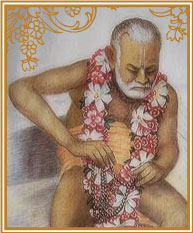 Shri Jagannatha dasa Babaji Maharaja used to reside at Surya-kunda in Vraja-mandala where he performed his bhajana, but at the end of his life he moved to Shri Navadvipa-dhama. It was his habit to loudly chant the maha-mantra. He was recognised as the most prominent scholar of his time. He was also acknowledged as being most expert in relishing transcendental mellows (rasika) and the most perfected Vaishnava in Gauda-mandala, Vraja-mandala and Kshetra-mandala. He is therefore known as vaishnava-sarvabhauma, the topmost Vaishnava. At Shri Bhaktivinoda Thakura’s request this great personality determined Shridhama Mayapura to be the birthplace of Shri Gaura. On his order a grand temple was constructed in Mayapura at the birthplace of Shri Gaura, where the deities of Shri Gaura-Vishnupriya-Lakshmipriya and Pancha-tattva are presently worshipped.

In the Bengali year 1302 (A.D. 1895), two years after Mayapura-dhama was located, Shri Jagannatha dasa Babaji Maharaja entered his unmanifest pastimes. He had appeared in a village in the Tangaila portion of the Mayamana-sinha district in East Bengal (Bangladesh) and remained in this material world for approximately 144 years. It is said that in an act of great mercy he infused his entire strength in bhajana and his knowledge of the scriptures, culminating in prema-bhakti, into the heart of Shrila Bhaktivinoda Thakura.

Once the disciples of Jagannatha dasa Babaji Maharaja complained to Shrila Bhaktivinoda Thakura: “We gave up our home to learn about bhajana from Babaji Maharaja, but instead he is instructing us to serve Bhagavan by growing flowers and vegetables. He is not educating us in meditation on Shri Krishna’s daily eight-fold pastimes. Please request him to train us in bhajana.”

Bhaktivinoda Thakura responded, “Growing tulasi, flowers, fruits and vegetables for the service of the deity will purify the living entities who are afflicted by offences and desires in the heart opposed to bhakti (anarthas); otherwise it is not possible for them to chant the pure, transcendental name. If unqualified persons meditate on these confidential pastimes their anarthas will substantially increase, and gradually they will be unable to perform bhajana. We will benefit by performing our sadhana according to Shrila Babaji Maharaja’s instructions.”

Shrila Jagannatha dasa Babaji Maharaja used to save whatever donations people gave him. One day he ordered his disciples to buy rasagullas and other sweets, offer them to the deity and give the prasada to the cows and dogs of the dhama. His disciples, however, wanted to use the money to invite the babajis of that place for a grand festival. Babaji Maharaja forbade them. “It is more beneficial to feed the cows and dogs of the dhama than to feed so-called Vaishnavas who outwardly dress as saintly personalities wearing tilaka and beads, but who secretly engage in illicit activities. By feeding the animals of the dhama one will enter pure bhakti.” All the rasagullas were then given to the cows and dogs.

In his extreme old age Babaji Maharaja’s eyelids drooped so low that they obstructed his vision. There was a dog where he lived that had six or seven puppies. When his disciples brought him maha-prasada he would wait for the puppies to come to him and count them with his fingers. Then he let them eat from his plate. Only after they had eaten would he himself honour prasada. If his disciples hid the puppies from him he, displeased, would not honour prasada. He would indignantly say, “You people do not understand that these are the puppies of the dhama; they are not ordinary. I will not take anything until they come here and honour prasada with me.” Such was Babaji Maharaja’s firm faith in the dhama.

His disciples used to carry him in a basket on their heads – sometimes to Mayapura, sometimes to Godruma-kunja and some-times to other places. Upon arriving at Shriman Mahaprabhu’s birthplace in Shridhama Mayapura, he sang and danced, jumping high into the air.