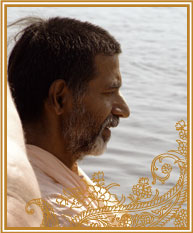 Bangalore, India
Email: This email address is being protected from spambots. You need JavaScript enabled to view it.

Sripad Bhakti Vedanta Dandi Maharaja is a teacher and practitioner in the ancient Gaudiya Vaisnava line. He is a disciple of His Divine Grace Srila Bhaktivedanta Narayana Maharaja, the world-famous preacher of Krishna Consciousness, and has also travelled widely throughout India, Malaysia, Taiwan, Singapore and the United States, preaching the message of pure love. Maharaja has arranged many Interfaith conferences around the world, to bring forth harmony and understanding among different faiths, and has written the book, “Vegetarianism- a scientifically proven and time honored path to peace.”

In particular, Bhakti Vedanta Dandi Maharaja’s speciality is to speak on the meeting point between modern science and ancient wisdom. With his extensive background in modern science, Maharaja can explain the essential truths of the Eastern scriptures in the language of modern science.

Drawing on his background in computer languages, artificial intelligence, computer security, quantam mechanics and medical science, Maharaja easily and expertly shows how modern thinkers are striving for a perfect understanding of reality, and that this perfect conception is found fully in the Vedic scriptures of India. The scientific method strives towards perfection, whereas the Vedic method originates in the perfection of spirit. Maharaja explains how even the most ground-breaking thinking in modern science, is but an imperfect version of the full-fledged conception of the essential nature of reality, which was fully understood and revealed by the ancient Aryan sages. This knowledge continues through an unbroken chain of spiritually realized saints all the way to the present day. Maharaja’s own spiritual master is such a saint.

-Ramayana - The most amazing rediscovery of the millennium is NASA’s satellite observations of Sri Rama’s Bridge. This bridge is an ancient, massive man-made rock bridge, which joins together India & Sri Lanka. Modern science tells us that this bridge was constructed some 1.5 million years ago. This figure agrees with scriptural authority, and the history of Lord Ramachandra, a powerful incarnation of Godhead, constructing this bridge, is told in ancient Vedic literature.

Lord Sri Ramachandra has said in Sri Ramacharitamanasa, “mama krita setu jo darashanu karihee so bhinu shrama bhavasagara thareehi “ Translation: “And he who sees the bridge erected by me will be able to cross the ocean of worldly existence without any exertion.” (Lanka Kanda 1-5)
This presentation brings together paintings, sculpture, tradition, scriptures, and historical findings around the world to convince the authenticity of Ramayana, thus increasing everyone’s faith and devotion.

Jaiva Dharma – Srila Bhaktivinoda Thakura’s Jaiva Dharma is a compact and easy-to-read book, which is written in the form of a story. Yet the entire length and breadth of the transcendental Krishna conception is presented, the crown-jewel of all philosophical systems. Srila Bhaktivinoda Thakura has managed to put all of this in a small and easy to understand book. This amazing feat of the author is compared to placing the entire great ocean in a small pot. This slide show gives the essence of this great piece of literature.

Sri Gauranga Mahaprabhu – The life and instructions of the incarnation of Godhead for this age.
Origin of the Soul – The question, “Where do I come from?” is thoroughly and authoritatively answered, according to the version given by the saints.
The Nectar of Instruction – The ultimate goal of life and the process to achieve it are both given here.

Vaisnava Aparadha – The greatest danger in spiritual life is clearly addressed – that of seriously offending a saintly person.

Sri Guru Tattva - The following question is clearly answered, “What is the nature of the bona-fide spiritual guide, and what should be our attitude towards him, so that we may ingest and follow his teachings?”

Jagai-Madhai – Even the most lowly and fallen persons can be delivered by the grace of Gauranga Mahaprabhu, the Supreme Personality of Godhead. This is evidenced by the case of Jagai and Madhai. These two brothers were so greatly sinful that it became difficult for even Lord Yamaraja, the greatly powerful demigod of justice, to keep track of their host of sins. Yet they were easily delivered by the grace of Sri Gauranga Mahaprabhu and His brother Sri Nityananda Prabhu.

Glories of the Holy Name – The Lord comes to us in a very accessible form; his holy names. The incredible glories of these names are discussed here.

Srila Gopal Guru Gosvami – The incredible character and teachings of this great South Indian saint are spoken of.

Maharaja has worked with RCA, GE, US Army Corps of Engineers and taught at City University of New York. He has three US Patents issued.
Now Maharaja is a full-time practitioner of the path of Gaudiya Vaisnavism. He also continues to travel and preach this divine song.