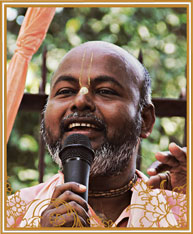 Sripad Bhaktivedanta Sridhara Maharaja was born on 10th August, 1965. He was a devotee from his childhood. The village he was born in (not far from Jagannatha Puri, Orissa) is very close to the birthplace of Sri Raya Ramananda.

When Sripad BV Sridhara Maharaja (then a boy of 14) came to his future diksa-guru's temple for the very first time, he brought a big jackfruit as a donation. When Srila BS Siddhanti Maharaja returned from a preaching tour, he at once noticed a big jackfruit in the temple. He was surprised and inquired, 'Who brought this?' Later one day when Sridhara Maharaja finally joined the temple, the devotees introduced him to his future Guru as 'the boy who brought the jackfruit'.

Sripad Sridhara Maharaja joined the temple full time even against the wishes of his protesting parents and elder brother, and remained in his Gurudev's seva till his very last day. Srila BS Siddhanti Maharaja gave him harinama and diksa initiation and the name Sripad Rasananda dasa Brahmacari.

When Srila Siddhanti Maharaja left the planet, Rasananda Prabhu began to inquire about the whereabouts of Srila Bhaktivedanta Narayana Goswami Maharaja, as he was eager for listening to his harikatha.

Soon after he reached Mathura and remained with our beloved Srila Gurudeva for years in Mathura till he was handed over the responsibility of Sri Rupa-Sanatana Gaudiya Math in Vrindavan. While being in charge of Srila Gurudeva's main temple in Vrindavan (and he is still performing that seva!) Rasananda Brahmacari Prabhu has trained literally hundreds devotees from both India and the West. His sweet name was always in full correspondence with his sweet nature and sweet Vraja harikatha and kirtan.

In 2010 he took the sacred order of sannyasa from Srila Gurudeva, his siksa guru, and now he is absorbed in preaching travelling all over the world.