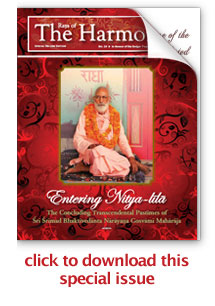 It is with a desire to propagate the sublime glories of the concluding transcendental pastimes of our most worshipful Srila Gurudeva, nitya-lila pravista om visnupada Sri Srimad Bhaktivedanta Narayana Gosvami Maharaja, that we humbly present Entering Nitya-lila, a special on-line edition of the Rays of The Harmonist (No.24) in honour of the New Braja (Badger) puspa-samadhi ceremony, 2011.

The illness enacted by the maha-bhagavata is not to be equated with suffering due to the threefold worldly miseries. While manifesting the perfect ideal of vipralambhamaya-bhajana, or bhajana suffused with a mood of separation, the maha-bhagavata deceives those who are extremely antagonistic to Bhagavan and who are offenders. At the same time, he confers the opportunity to serve upon those who are sevonmukha (inclined to render service). He demonstrates the living ideal of following the instruction to serve Sri Hari with intense endeavour and enthusiasm, even amidst worldly tribulations.
During this period of ill health, Srila Gurudeva remained absorbed in deep transcendental moods. Sometimes he would utter indistinct words, and other times he would chant his ahnika or stava-stutis (devotional prayers) for hours on end. Only upon his servants’ repeated efforts to offer him food or medicine would he slowly return to external consciousness, sometimes fully and sometimes only partially. Thus Srila Gurudeva would constantly remain in an internal state (antara-dasa).

We sincerely pray that these articles enhance our conception of the maha-bhagavata Srila Gurudeva’s wondrous pastimes, and that they stimulate loving feelings of separation from him, thus nourishing our inner connection with him.

Aspiring to serve Sri Guru and the Vaisnavas

The Rays of The Harmonist team