Rays of The Harmonist - Kartik 2011 Edition 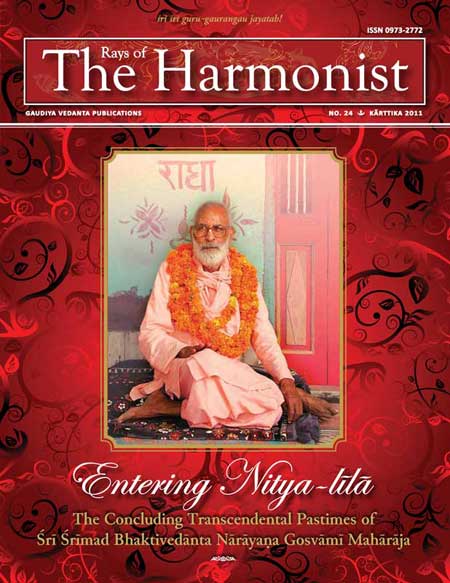 This Kartika, The Rays of The Harmonist team humbly presents the printed edition of "Entering Nitya-lila", the concluding transcendental pastimes of Sri Srimad Bhaktivedanta Narayana Gosvami Maharaja. Apart from above pictorial report, this edition's featured articles are entitled "The Real Significance of the Pastime of Illness Manifested by the Maha-bhagavata" and "The Avirabhava and Tirobhava Saktis" (an explanation of the Lord's internal potency that manifests a transcendental personality in this world and later makes such a personality disappear from our vision).

"We can perceive that Srila Gurudeva's divine pastime of returning to Vraja is composed of unlimited, variegated wonder. By reflecting upon his departure with transcendental faith, his sincere followers, who feel acute separation from him, can also become genuine travellers to the land of Vraja. During his departure pastimes, Sri Srimad Bhaktivedanta Narayana Gosvami Maharaja manifested innumerable astonishing pastimes, some of which are described in the enclosed report."

This special edition is now available in print at Sri Giridhari Gaudiya Matha, (Govardhana) and Vrndavana. A special on-line only preview of this Karttika edtion was posted in honour of the New Braja (Badger)  puspa-samadhi ceremony, June 2011.  The full on-line Kartika edition will be available at a later date.