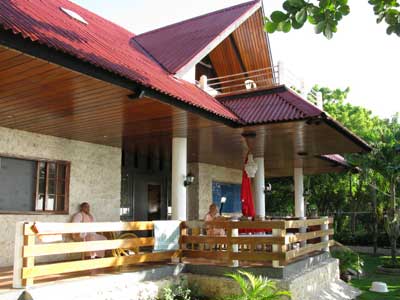 Srila Bhaktivedanta Narayana Gosvami Maharaja and his party spent two months, from mid-December to mid-February, on a writing retreat on the tropical island of Cebu, Philippines. There he worked on his translation of Srimad-Bhagavatam Canto Ten, and his bhavanuvada of Srila Visvanatha Cakravarti Thakura's commentaries of the same. 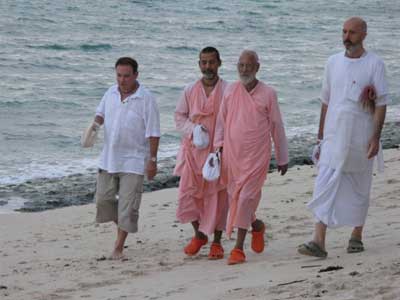 During the last three days of his stay in the Philippines, Srila Maharaja went to Cebu City, where he resided at the home of Sripad Tamopaha prabhu and his wife Campakalata dasi, about forty-five minutes from the festival site.

Two days before the festival would start, the first of the visiting and local devotees to arrive at the site happily engaged themselves in transforming the old farm of Sriman Radhesa dasa and his wife Billy, which was to become the site of the magical, transcendental festival.

By the kindness of Radha-kanta prabhu who paid for half the boat and plane fare of all those devotees coming from the islands of Manila and Bacolad, so many were able to attend the festival who otherwise might not have been able to afford the journey. On the day before the festival and on the festival day itself, up to the time just prior to Srila Maharaja's arrival, the now sixty visiting and local devotees transformed the farm into Vaikuntha - by making a beautiful, opulent altar, decorating the pandal with banana trees, mango leaves, large palm leaves, lights, attractive mats, transcendental posters and other decorations, by cleaning up the entire farm area and grasses, scrubbing the kitchen area, guest accommodations, and bathrooms, by bringing in water from outside for bathing and drinking, and by making the farm suitable for electricity. Many devotees camped out on the land, many others stayed in the huts on the farm, and several stayed in residences nearby. 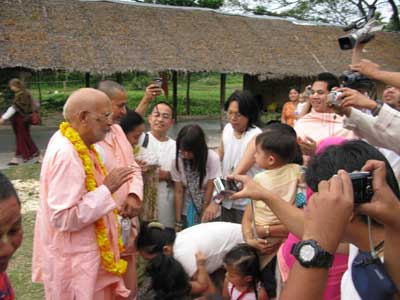 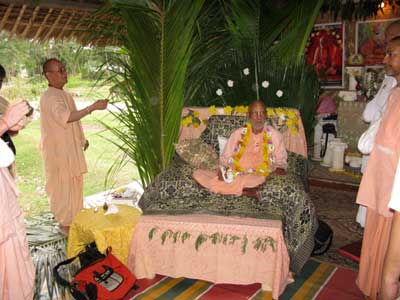 The majority of the devotees present had never personally met Srila Narayana Gosvami Maharaja before the festival, and most of those who had seen him had been feeling his separation since his previous Philippines harikatha festival in 2003. Therefore, the mood of the devotees was that of feeling overwhelmed and overjoyed and tear-filled upon gaining the opportunity to finally hear his hari-katha and speak with him directly, upon receiving his direct instructions and directions, and upon freely inquiring from him for three days.

Srila Maharaja gave two public lectures at the festival site - on January 17th and January 18th - and before speaking he called on several local and international senior devotees to speak about guru-tattva and the purpose for his coming to Cebu. 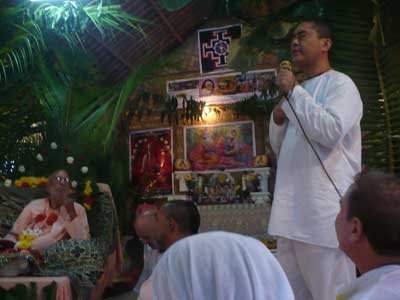 Srila Maharaja began his class on January 17th, by saying: "For a long time I was thinking to come to the Philippines, so Tamopaha prabhu helped me; he brought me here by his very deep and loving desire to serve me. Like our guru-parampara acaryas coming in the line of Sri Caitanya Mahaprabhu, who traveled all over India by foot, and like Srila Bhaktivedanta Swami Maharaja who traveled throughout the entire world, I am preaching the mission of Sri Caitanya Mahaprabhu - to chant and to remember Krsna as the Supreme Personality of Godhead.

"Because you are very poor, I request that you give me just one thing. Give me your heart and ears and hear patiently, and whatever you are hearing from me, kindly follow.

"You should know that old age is coming very soon. Even small children will soon become old, and even the world's entire combination of scientists and doctors will fail to stop or delay your old age. And one day you will have to leave this body, for no one can avoid death. Perhaps you may live up to one hundred or one hundred twenty-five years, but not more than that.

You are not this physical body. You are part and parcel of the Supreme Lord Krsna, but you have forgotten Him and maya has thrown you into this material world. You have forgotten your true identity; that you are not this physical body and that the name of your body is not your real name. When your death comes, you will not be able to take your father, mother, sons, daughters, wealth or any of your possessions with you. No one will be able to help you, even if you are a millionaire or a billionaire. Not a single farthing will go with you; you will have to go alone. Moreover, you will not be able to take your own body with you, or even a hair from your body. So why, like a donkey, are you engaged in this worldly life? By such engagement no one can be happy in this world. Everyone has been searching for happiness for millions upon millions of births, but no one has become happy.

"Money cannot give you happiness. If it could, then America would be able to purchase all the available happiness and there would remain nothing for anyone else. By wealth, beauty or any other material qualifications, no one can be happy. One can be happy only by chanting the names of the Supreme Lord and by remembering Him:

["Prahlada Maharaja said: Hearing and chanting about the transcendental holy name, form, qualities, paraphernalia and pastimes of Lord Visnu, remembering them, serving the lotus feet of the Lord, offering the Lord respectful worship with sixteen types of paraphernalia, offering prayers to the Lord, becoming His servant, considering the Lord one's best friend, and surrendering everything unto Him (in other words, serving Him with the body, mind and words) - these nine processes are accepted as pure devotional service.

"Sri Krsna says, "I will at once liberate anyone who calls Me by these names, and I will give them My heart's transcendental service." Only by chanting the holy name, and remembering Krsna can you be happy in the future. Without this, you cannot be happy; this is guaranteed." [Respected Harikatha reader, if you would like to hear the remainder of this discourse, please logon to www.purebhakti.tv, where this entire festival is televised.]

["The Supreme Personality of Godhead Vrajendra-nandana Sri Krsna and His transcendental abode Sri Vrndavana-dhama are our worshipable objects. The most excellent method of worshipping Krsna is that adopted by the gopis, the young wives of Vraja. Srimad-Bhagavatam is evidence of this; it is the flawless and most authoritative scripture. And Krsna-prema is the fifth and highest achievement of human life, beyond mundane religiosity, economic development, sense gratification and impersonal liberation. This is the opinion of Sri Caitanya Mahaprabhu. We have supreme regard for this conclusion, and we have no inclination or respect for any other, cheating opinions." (Sri Caitanya-mata-manjusa)]

Moreover, we should know that Vrajendra-nandana is always accompanied by Srimati Radhika, and moreover we should think, "My Svamini (Mistress) is Srimati Radhika, and Krsna is the most beloved of my Svamini. I have no direct relation with Krsna. I am a maidservant of Radhika." This relation is Supreme. [If you would like to hear the audio or see the video of this entire discourse, please logon to www.purebhakti.tv.]

At the end of his discourse, Srila Maharaja gave a personal instruction to his audience of one hundred fifty Filippino devotees and guests: "I request that you read my books and the books of Srila Bhaktivedanta Swami Maharaja. You should also distribute these books. This will be your service. Syamarani has made so many pictures of Krsna, and others have made some as well. You can sell them as well. This will be your service."

About thirty new devotees took initiation. In addition, about thirty devotees who had already been initiated over the phone during the past two years also participated in the initiation ceremony. 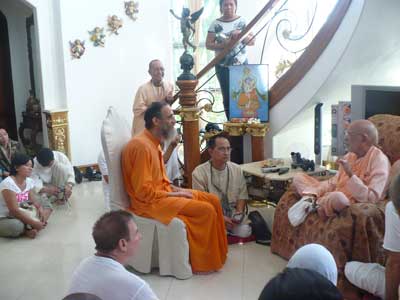 On the morning of January 19th, just before the second day's initiations, Dada Dharma-vedananda, a yoga master and head therapist and founder of the Ananda Marga Wellness Center came for darsana and had a very interesting discussion with Srila Maharaja.

Srila Narayana Maharaja asked Dada Dharma-vedananda for a clarification of the Ananda Marga philosophy, such as what is the aim and object of their society, to which he replied that it was self-realization and service to others. Dada Dharma said they respect all deities, and they meditate on the infinite God, who is with form and without form, and who is without limitations, and of whom we are expressions. He said they quote from all scriptures but do not follow any particular scripture.

The following is a small excerpt of Srila Maharaja's illuminating words: "I think you should follow the Vedas. The essence of the Vedas is Vedanta-sutra, and the explanation of Vedanta is Srimad-Bhagavatam. If you want to be happy in your life, try to give up all conceptions and accept the teachings of Srimad-Bhagavatam. You will realize in your life that, ‘I am happy,' and you will make others happy also. Otherwise, what you are telling will not suffice.

"God is infinite and also finite, meaning that He has a form:

["The Personality of Godhead is perfect and complete, and because He is completely perfect, all emanations from Him, such as this phenomenal world, are perfectly equipped as complete wholes. Whatever is produced of the Complete Whole is also complete in itself. Because He is the Complete Whole, even though so many complete units emanate from Him, He remains the complete balance."(Sri Isopanisad, verse 1)]

After their friendly exchange, Srila Maharaja requested Dada Dharma-vedananda to help some of the devotees with their health problems, and he kindly agreed.

At the end of the devotees' three-day association with Srila Maharaja, they felt fully inspired and enthused to practice their own devotional activities and also to preach Krsna consciousness on their respective islands.