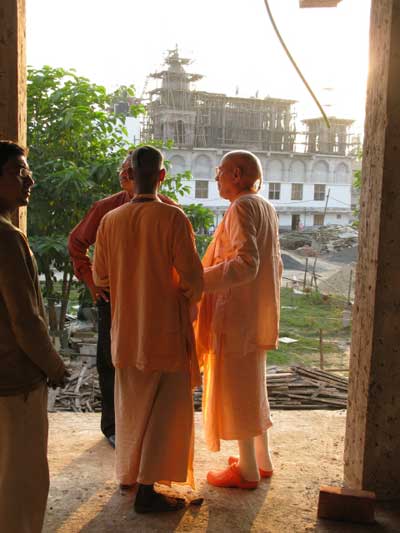 Attended by over 1,500 faithful devotees, Sri Vraja Mandala Parikrama was successfully completed under the expert guidance of Srila Bhaktivedanta Narayana Gosvami Maharaja. After two days of rest, on November 15, 2008, Srila Maharaja departed from his bhajana kutir in Sri Giridhari Gaudiya Math, Govardhana, bound for Delhi. A two-day program was then held in Sri Ramana-Bihari Gaudiya Matha in Delhi, to commemorate the installation of the Deities there a few years before. 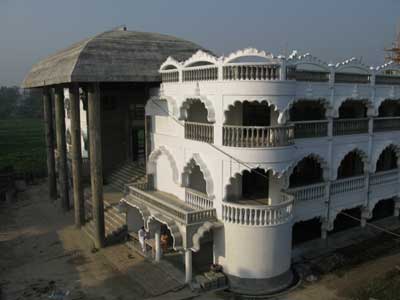 Srila Maharaja's room had the advantage of a small balcony providing an excellent vantage point from which to view the entire construction site, from which he happily observed his temple slowly manifesting. 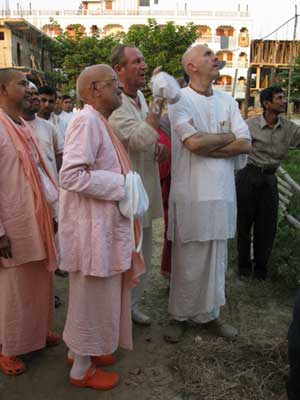 He spent time touring the construction site and discussing with the architects, developers, sannyasis, and senior devotees. He was shown the massive temple and its partially built domes, the new kitchen located behind the temple, the site for his own bhajana kutir which will be built on part of the adjacent lake, the third phase of the guest house development, and a new level currently being built on top of the first guest house.

Sripad Madhava Maharaja commented that Srila Maharaja was so happily absorbed in the manifestation of his Navadvipa project that he even left aside his writing. 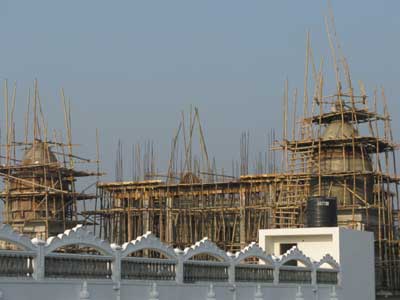 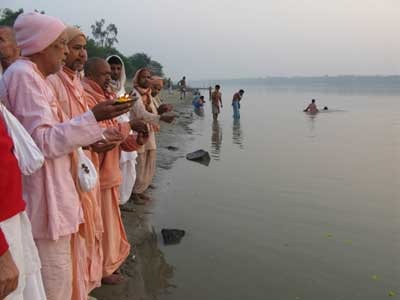 Offering arati and prayers to Ganga-devi

On the morning of the 20th Srila Maharaja walked to the Ganga at Panca-veni, and offered arati and prayers to Ganga-devi. He recited Sri Yamunastakam, thus reminding the devotees present that at this holy place the Ganga flows on one bank and the Yamuna at the other. 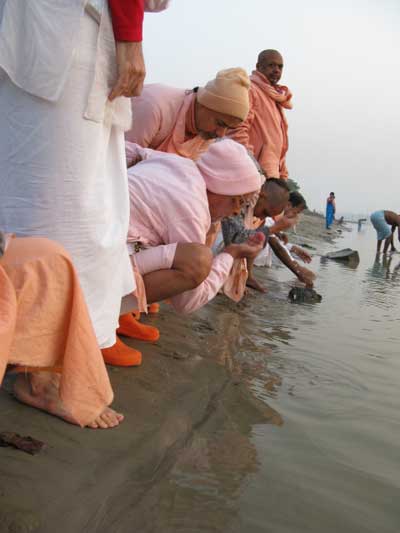 During the day he met with numerous disciples, guests, and well wishers, and that evening he gave class in the temple-room, in Bengali, to around 80 devotees. He spoke about the definition of pure bhakti, the glories of the holy name, and how by chanting in the association of pure devotees (sadhu-sanga) seven results are achieved as described in the verse:

["Let there be supreme victory for the chanting of the holy name of Sri Krsna alone, which cleanses the mirror of the heart and completely extinguishes the blazing forest fire of material existence. Sri-krsna-sankirtana diffuses the soothing moon rays of spiritual ecstasy (bhava) that cause the living entity's white lotus of good fortune to bloom. The holy name is the life and soul of transcendental knowledge, which is here compared to a wife. It continuously expands the ocean of transcendental bliss, enabling one to taste complete nectar at every step. The holy name of Sri Krsna thoroughly cleanses and cools the self, one's nature and one's determination, as well as the body, both internally and externally." (Sri Siksastakam verse 1).]

He also stressed the importance of following very closely the order of Sri Guru and completely avoiding independent activity. 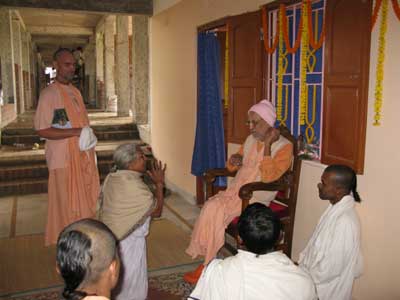 He also gave Harikatha on the evening of the 21st, again glorifying the holy name. At that time he explained that Sri Nama (the holy name) is extremely powerful, but that, in general, neophyte devotees have no faith in its potency. He said that Sri Nama can destroy more sins than it is possible to commit, and that Krsna's name and Krsna Himself are non-different. He quoted this verse:

And the following verse:

["Lord Krsna's holy name, which is the sweetest of sweet things, the most auspicious of auspicious things, and the transcendental fruit of the vine of all Vedic literature, delivers, O best of the Bhrgus, anyone who, either with faith or contempt, chants it even once."
(Sri Skanda Purana)]

Srila Maharaja mentioned that although we cannot see Krsna, we can chant His name, which has the power to attract Him directly into the heart. He said that Ajamila chanted the name of Narayana at the time of death, and due to the name's independent and transcendental nature, it delivered him from the clutches of the constables of death (the Yamadutas).

Srila Maharaja's visit to Navadvipa coincided with the beginning of his Bengal preaching, headed by Sripad Tirtha Maharaja. After receiving his kind instructions, around fifty brahmacaris and several sannyasis divided into groups and began preaching in the West Bengal area - their mission being to attract thousands of pilgrims to attend the Navadvipa Parikrama in March and to simultaneously collect thousands of kilos of rice, vegetables, and dahl for the Parikrama. He gave his blessings as each party left for their assigned areas.

On the 22nd morning, Srila Maharaja departed for Calcutta. There he began the construction of a new building on the site of Srila Vamana Gosvami Gaudiya Matha, by performing vitti-sthapan or laying of the corner stone. That evening he left Calcutta on his way to the Philippines for a two month writing retreat.

After leaving the Philippines, Srila Maharaja will be holding a one-week hari-katha festival in Malaysia, from January 22rd-28th. His grand Vyasa-puja festival will be celebrated on January 26th. Every one in the world is invited. For details please logon to: www.gaudiyamathmy.com