Srila Narayana Gosvami Maharaja arrived in Durban, South Africa, on January 4, 2010, to begin his first visit to South Africa. At least one hundred devotees, only about ten of whom had previously met him in person, were waiting for his arrival from Mauritius while absorbed in a blissful kirtana.

Local and international devotees had been holding programs for the previous two months in anticipation of Srila Maharaja’s arrival. In order to advertise his four days of harikatha festivals, they had held tent programs, Hindu temple programs, hall programs and home programs, and distributed tens of thousands of flyers and posters around Durban and Pietermaritzburg. They also spoke on radio and television programs, and advertized in and conducted interviews for various local and national newspapers. 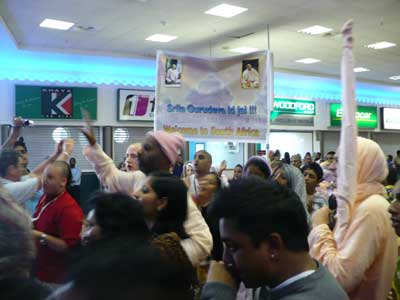 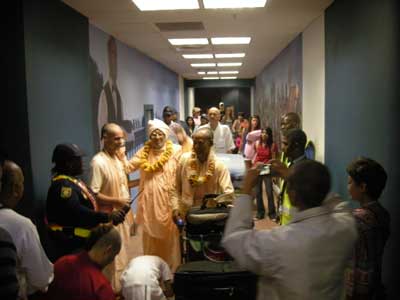 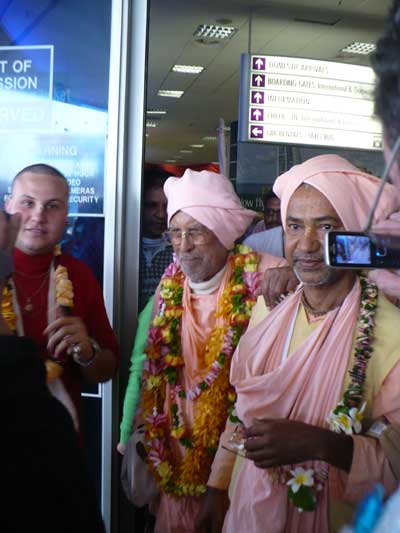 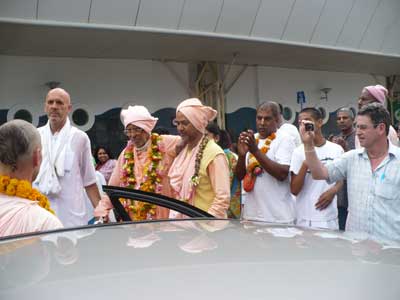 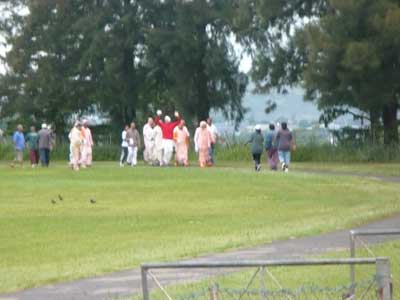 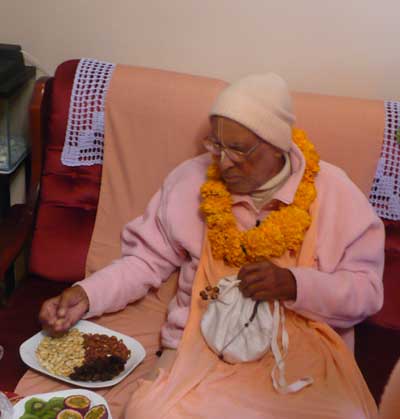 Srila Maharaja kindly accepted guru-puja and honored a morsel of maha-prasadam at different devotees’ homes, in order that the devotees present could be blessed by his maha-maha prasadam. 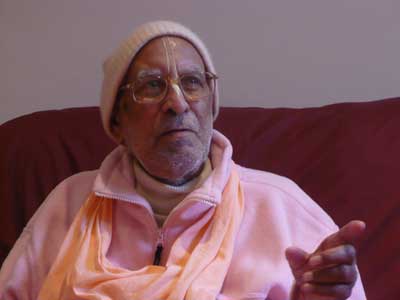 In a darsan after his first morning walk, Srila Maharaja told the devotees what he planned to speak about at the public hall that evening:

Srila Narayana Gosvami Maharaja: “First of all I want to tell about my relationship with Srila Bhaktivedanta Svami Maharaja. I want to explain that siksa-guru is not less than diksa-guru. In a letter he wrote to me that he accepted me as his siksa disciple.

“I am not ISKCON, but rather the mother and father of ISKCON. It was in our guru-parampara that he took harinama and diksa initiation from Srila Bhaktisiddhanta Sarasvati Thakura, and sannyasa from Srila Bhakti Prajnana Kesava Gosvami Maharaja.

“He is in that line and I am in that line, whereas the ISKCON leaders are not in line. Why, in the last moment of his life, did he order me to give him Samadhi? Bon Maharaja and his other god-brothers were there in Vrndavana, and all his own disciples like Tamal Krsna Maharaja, Bhakti-caru Maharaja, and Bhavananda were also there, so why did he order me to give him Samadhi? Why is this? It is because I am his first and real disciple. Others may fall down, but I cannot fall down.”

Sripad Madhava Maharaja: He who gives samadhi is the proper and actual disciple. 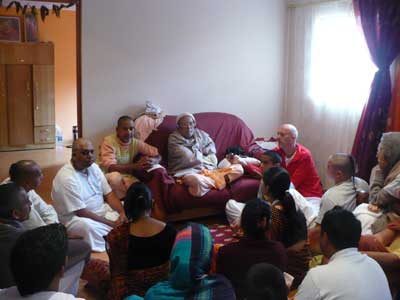 Srila Maharaja gave another darsana at 10:00 am for all the local devotees. He held up the book, “Letters from America,” and asked Acyuta dasa where he received it. When Acyuta dasa replied that he had bought it in India, Srila Maharaja requested him: “You can print more, and give them to all the devotees. It is a very good book. You should print it very soon.

“In his own language, Bengali, Parama-pujyapada Srila Bhaktivedanta Svami Maharaja wrote me in one of his letters: ‘You are the best guru-sevaka. We have the same transcendental relationship that I have with my Gurudeva, Srila Prabhupada. You are sending me so many things for my preaching, and helping me so much. I am indebted to you.’ Although I am his disciple, he used to offer me pranama, saying, ‘My dear Narayana Maharaja, dandavat pranama.’

Krsna-priya dasi: “Gurudeva, how can we take shelter of you, and what can we do to serve you when you leave for Brazil and other countries?”

Srila Narayana Gosvami Maharaja: “You can serve by mind.”

Krsna-priya dasi: “We want you here all the time, Gurudeva.”

Srila Narayana Gosvami Maharaja: “The mind is superior to the body. If you have no mind, then you are mad. What is the meaning of “samadhi”? To talk, serve, and to do everything by mind, being totally absorbed is called samadhi. Samadhi means to serve by mind; this is better. If service is not performed with the mind, it means there is no sraddha, or faith, and you will not be able to do anything properly by the body. Faith is the work of the mind.” 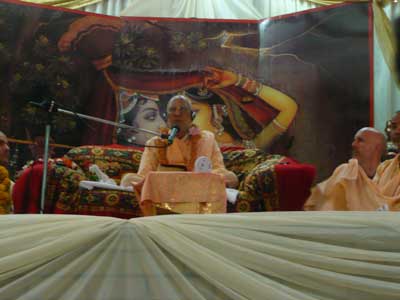 About 500 people attended each of the Pietermaritzburg public programs. Preceding Srila Maharaja’s arrival in the hall, Sudevi dasi and Kishori Mohan dasa and team performed a concert of bhajanas. Then, just before Srila Maharaja’s discourse, the local devotee-youth sang a bhajana and performed a kathak dance.

Srila Maharaja began his discourse by describing in brief the early life history of his siksa-guru, Srila Bhaktivedanta Svami Prabhupada, and their relationship together. As he discussed this history on several other occasions, please see Endnote 1 for some similar excerpts.

“Srila Bhaktivedanta Svami Maharaja is a disciple of Srila Bhaktisiddhanta Sarasvati Thakura, and he took sannyasa from my Gurudeva, Sri Srimad Bhakti Prajnana Kesava Gosvami Maharaja. Srila Bhaktivedanta Svami Maharaja has accepted the guru-parampara from Brahma, Sri Madhvacarya, Vyasa, Sri Caitanya Mahaprabhu, Nityananda Prabhu, Srila Rupa Gosvami, Sri Svarupa Damodara, Srila Krsna dasa Kaviraja Gosvami, Srila Narottama dasa Thakura, Srila Visvanatha Cakravarti Thakura, Srila Bhaktivinoda Thakura and then Srila Bhaktisiddhanta Sarasavati Thakura Prabhupada. He has personally declared that he belongs to this guru-parampara. So in truth Srila Svami Maharaja has not given anything new, because everything he has given everything is originally coming from the guru-parampara. It is the ‘same wine in a new bottle.’ *[see endnote 2] What is the new bottle? It is the English language.

“Also, I want to tell you that he and I have always had a very intimate relationship. When he went to America, I received at least four hundred letters from him, as he used to write me weekly. Satsvarupa Maharaja borrowed all these letters for Srila Svami Maharaja’s biography, but he could not return them. Only a few were left, about fifteen, written in Srila Svami Maharaja’s own Bengali handwriting, and they have been published in a book, ‘Letters from America.’

“In one of the letters he wrote to me, ‘You are the best disciple of Srila Bhakti Prajnana Kesava Gosvami Maharaja. You have helped me by sending me karatalas, sitar, Deities, mrdanga, tempura, harmonium, Mathura pera (an Indian sweet), my books for translation, and so many other things. I am indebted to you. Our relation is transcendental, like my relationship with Srila Prabhupada Srila Bhaktisiddhanta Sarasvati Thakura. I have accepted you as my disciple.’

“You should know that sometimes siksa-guru is better than diksa-guru, in the sense that he is like a friend. A disciple can open his heart to him. In the first chapter of Sri Caitanya-caritamrta, Srila Krsnadasa Kaviraja Gosvami first offered pranama to the six Gosvamis, his siksa gurus. He did not mention the name of his diksa-guru.

[“These six are my instructing spiritual masters, and therefore I offer millions of respectful obeisances unto their lotus feet.” (Sri Caitanya-caritamrta, Adi-lila 1.37)]

[“One should know the instructing spiritual master to be the Personality of Krsna. Lord Krsna manifests Himself as the Supersoul and as the greatest devotee of the Lord.” (Sri Caitanya-caritamrta, Adi-lila 1.47)]

“In this regard, I am his first and best disciple; he accepted me as such. Whatever is being said by those who are preaching against me is false – from top to bottom it is false. They are very afraid of me. That is why as soon as they understood that we were advertizing our programs in Pietermaritzburg, Durban, and then in Johannesburg, they advertized and held programs of their own on the same evenings, in the same cities, in nearby venues. [They flew into S. Africa several ISKCON gurus from around the world, and they also flew in a famous ISKCON bhajana singer from America to do a concert on those same nights – just to try to ensure that all ISKCON related devotees would feel obliged to miss our Srila Maharaja’s programs –ed.].

“Very afraid, they think, ‘If anyone goes to Narayana Maharaja, they will never return to ISKCON.” Therefore, they began to widely distribute propaganda to prevent anyone from coming to see me. [They also threatened all their members and congregation that if anyone goes to see Srila Maharaja, that person will be banned from ever being allowed in an ISKCON temple, that Srila Prabhupada would reject him, and that he would go to hell. -ed.] It is true; those who will actually hear our sweet hari-katha will never return. Even if the leaders come, they would be changed, but out of fear they do not come. Asrama Maharaja first came to me in disguise, as a spy, and then he stayed with me.

“He was so merciful to me…He ordered me, “By your own hand, you should give me Samadhi, and after that he did not speak with anyone…I replied, “I will do so.” He told me in Bengali, “I have brought so many monkeys from Western countries. I was not able to fully train them due to their lack of qualification. Please continue their training and help them.” I said, “Surely.”

“Although these naughty boys are doing something against me, I don’t mind. I always excuse them, and I always want to help them.”

To see the video of this complete discourse, please visit www.purebhakti.tv.

You should know my relationship with your Prabhupada. He is my siksa-guru and also the god-brother of my spiritual master. He took sannyasa, the renounced order, from my spiritual master, Srila Bhakti Prajnana Kesava Gosvami Maharaja, and I also did – so we are also god-brothers. We are also very intimate friends. I have known him since 1946, and have served and obeyed him since then. He is Bhaktivedanta Swami Maharaja and I am Bhaktivedanta Narayana Maharaja. I accepted sannyasa in 1954(1952) and he accepted it in 1959, so with respect to the renounced order, I am senior to him. I taught him how to make a danda (the sannyasa staff) and how to wear dor/kaupin and the sannyasa saffron clothes. He was very pleased with me, and he thus shared with me so many Krsna consciousness truths.

He first met his Gurudeva, Srila Bhaktisiddhanta Sarasvati Gosvami Prabhupada, eighty years ago in India, and at that time he received the order to go to Western countries to preach in the English language. He was delayed and came to the West after about 40 years. He wanted to take me with him to the Western countries, especially to New York where he first began to preach. He ordered me to send him all his books, which I did. I also sent him Radha-Krsna Deities, mrdangas, karatalas, and many sweets and other paraphernalia. He wrote me over 400 letters, and he confided to me in one letter that we have a transcendental relation that cannot be destroyed.

How did he come to America? By Scindia Shipping Lines – over the sea, not by airplane – carrying some books like Bhagavad Gita and his translation of the Srimad Bhagavatam. At that time he was penniless. First he came to Boston and then went to New York. He used to sing in a park, with karatalas, chanting with his eyes closed: “Sri Krsna Caitanya Prabhu Nityananda, Sri Advaita Gadadhara Srivasadi Gaura-bhakta-vrnda / Hare Krsna Hare Krsna Krsna Krsna Hare Hare, Hare Rama Hare Rama Rama Rama Hare Hare.”

Tears flowed from his eyes as he sang, and his heart melted. In that park there were many hippies drinking alcohol and engaging in varieties of illicit activities. They came and surrounded him; and when he sang, they would dance and sometimes offer him their bottles of wine. After some time, he turned all those hippies into 'happies' and their lives were changed. Thousands of hippies became happy and followed him. They began to meditate and worship the Supreme Lord, and thus they became very happy.