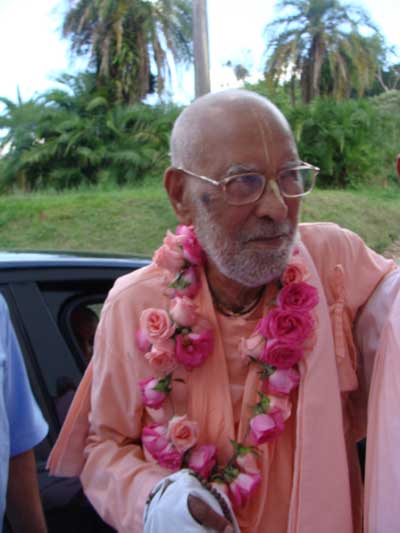 Srila Bhaktivedanta Narayana Gosvami Maharaja arrived in Sao Paulo, Brazil, on January 10th, after a long absence since 2003. He held a one-week hari-katha / Vyasa-puja festival at a very large resort-hotel called Del Verde, just a ten minute drive from his beautiful residence at the home of Sundarananda dasa and Gita dasi. In attendance were about 600 devotees, mostly from South America, and still more had come from England, Russia, North America, and other countries. 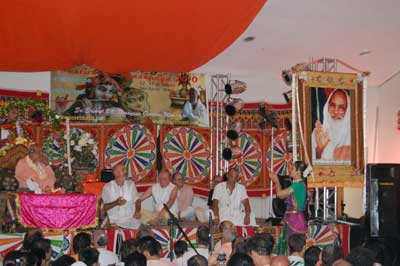 On most evenings before his discourses, there were performances of dramas and dances. 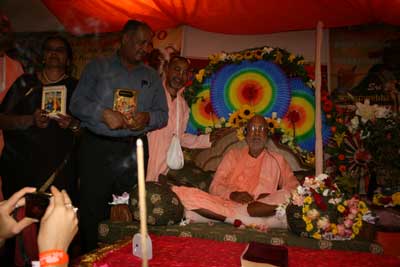 He first glorified his siksa-guru Srila Prabhupada Bhaktivedanta Svami Maharaja, and discussed their transcendental relationship. He told his audience, “I have travelled throughout the entire world, visiting all the places he sanctified. This is my thirtieth world-preaching tour.” 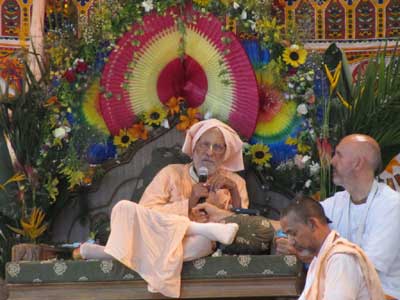 In his explanation of the glorious celebration of Vyasa-puja, he began, “On his birthday, an acarya worships his guru-parampara. This is called Vyasa-puja. Vyasa-puja is not a day on which the guru or acarya takes so many things from his disciples. On this day he worships Vyasadeva, his own Gurudeva, and the entire guru-parampara, declaring in essence: ‘I am following the path of my guru-parampara.’

“Thus, Vyasa is he who preaches all over the world (representing the circumference) that we are part and parcel of Krsna, eternal servants of Krsna. We have forgotten Him, and that is why His illusory maya has forcibly thrown us into this world. The bona fide guru is he who sits on an asana and, having realized the message of Vyasa, preaches the same message. Those who understand and follow this principle will remember Krsna by the mercy of their sad-gurudeva, and they will remember Krsna by the practice of bhakti-yoga. This is not possible if one has an ordinary guru.

“What is bhakti-yoga? Exercise of the body is not the real meaning of yoga, although this conception is broadcast everywhere in the world. The word ‘yoga’ means adding one thing to another. It comes from the Sanskrit word yoga, meaning ‘connecting.’ Ultimately yoga means connection of the jiva souls, who have forgotten Krsna and thus have been thrown into this miserable world, with Krsna Himself. A real guru awakens this relationship, and then Krsna mercifully takes them to Goloka Vrndavana and engages those souls in the service of Sri Sri Radha-Krsna.

“Moreover, He comes as Sri Caitanya Mahaprabhu. Although Mahaprabhu is the Supreme Personality of Godhead Himself, He went door-to-door. He said, ‘If you cannot come to Me, due to having totally forgotten your relationship with Krsna, then I am going door-to-door to tell you to follow bhakti-yoga and attain the service of Krsna.’” 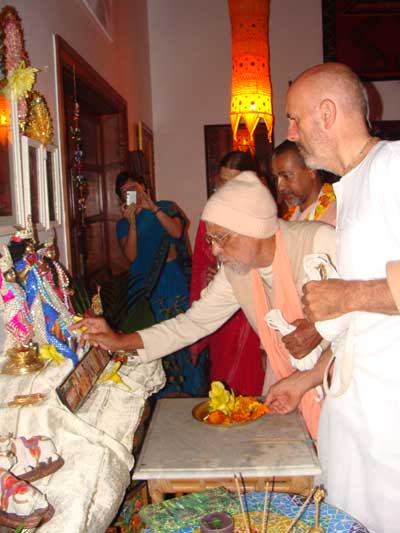 Each morning, before leaving for his morning walk at 6:00 a.m., Srila Maharaja offered flowers to the Deities at his residence He walked at a nearby park, at the same time answering the devotees’ various questions. He returned home at about 7:00 a.m., at which time he sat for a few minutes and met with the devotees who had been waiting for him to return. 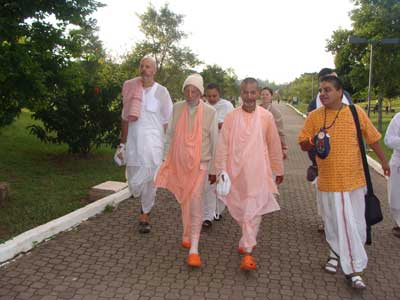 On his Vyasa-puja day, January 14th, Srila Maharaja came to the gorgeously decorated temple-room at 10:30 am, at which time he performed arati to the entire guru-parampara (disciplic succession of spiritual masters). After he completed the performance of the arati ceremony and worship, the devotees present began to perform his guru-puja. After that, all of them went up to his vyasasana, one-by-one, to offer their garlands and other gifts. This took almost one-hour, while kirtana resounded throughout the hall. 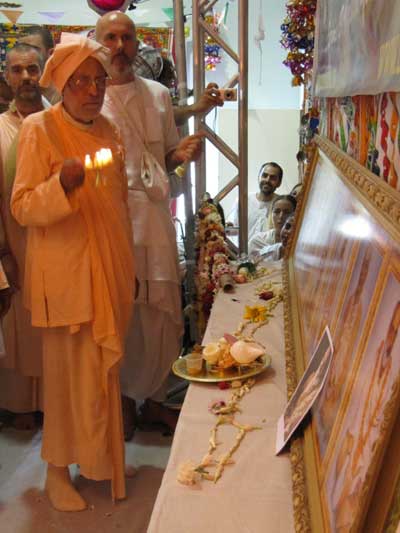 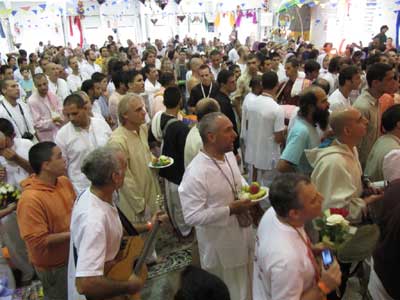 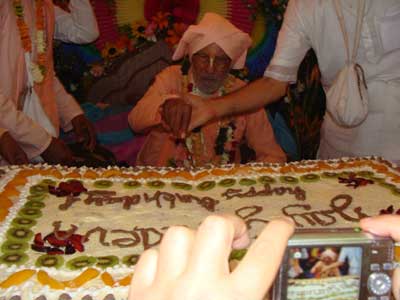 “This principle and procedure is coming from very ancient times, and in recent times it was discovered by Srila Bhaktisiddhanta Sarasvati Thakura Prabhupada. We have followed that. 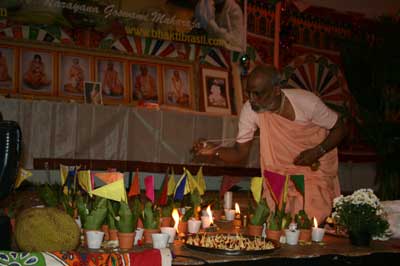 Srila Maharaja discussed the history of Nityananda Prabhu and Sri Caitanya Mahaprabhu and Their associates performing Vyasa-puja at the home of Srivasa Pandita. For the details of this history, please refer to the Vyasa-puja (Hawaii 2004) harikatha we sent out a few days ago, or hear it online at www.purebhakti.tv).

After relating this history he said: “What will we achieve from observing Vyasa-puja? We will attain pure krsna-bhakti, meaning pure prema-bhakti. I pray to Krsna and Sri Caitanya Mahaprabhu that They will be merciful to you by sprinkling pure krsna-bhakti in your hearts, and that you will be happy in this world and the transcendental world.” 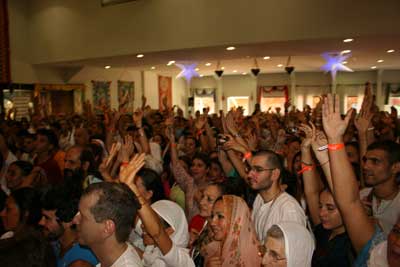