Dandavat pranama. All glories to Sri Sri Guru and Gauranga.

On December 29, 2010, at 3.00 am, in Sri Jagannatha Puri-dhama, our beloved Srila Gurudeva nitya-lila pravista om visnupada Sri Srimad Bhaktivedanta Narayana Gosvami Maharaja left the external vision of the souls in this world and accepted maha-samadhi. He simultaneously entered nisanta-lila, the pre-dawn pastimes, of Sri Sri Radha-Krsna and Sri Sri Gaura-Gadadhara. As an eternal resident of that pristine realm of the highest pure devotion, he never stopped serving there during his ninety year manifest presence in this world.

News of Srila Gurudeva's divine departure spread throughout the world in a moment, and thousands upon thousands of devotees, whose hearts had been melted and transformed by his mercy, experienced the deep anguish that can only be felt in separation from a pure Vaisnava. 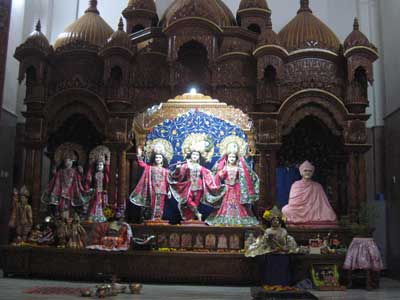 Upon hearing that his samadhi ceremony would be held in Sri Navadvipa-dhama the next morning, those who were able to attend immediately made their way there, traveling by plane, train, bus, or car, to participate in his Viraha-Mahotsava, or Disappearance Festival, at Sri Kesavaji Gaudiya Matha. Approximately two thousand devotees attended.

The car that brought Srila Gurudeva's divine body from Puri arrived in Navadvipa at about 10.30pm. Srila Gurudeva body was carried into the temple mandapa and on to the platform where he used to sit and give hari katha. His transcendental body majestically laid upon a bed strewn with fragrant flowers, giving his merciful blessings to all. In this very moving darsana, a constant flow of his beloved sons and daughters came to offer their heartfelt pranam and touch his lotus feet and hold them to their heads, and many offered flower-garlands. 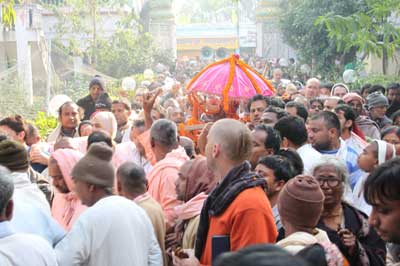 As mangala-arati approached, more and more devotees entered the temple room. Gathering around Srila Gurudeva, they sang Sri Gurvastakam, and Sri Prabhupada-Padma-Stavah, and then mangala-arati was performed. Preparations for the ceremony began, and at 8 am Srila Gurudeva's transcendental body was placed in sitting position on a palanquin with a canopy decorated with flowers.

A resounding kirtana accompanied Srila Gurudeva as he was carried to Sri Devananda Gaudiya Matha. There, he took darsana of Sri Radha-Vinoda Bihariji, and his Guru Maharaja, Srila Bhakti Prajnana Kesava Gosvami Maharaja, at his samadhi mandira. The devotees there performed arati to Srila Gurudeva and all sang "Gurudeva, Krpa Bindu Diya.... O Gurudeva, please give me a drop of mercy. Make this servant more humble than a blade of grass and give me the strength to tolerate all eventualities. Let me not hanker for my own honor and fame. Kindly take my soul and make me like you." 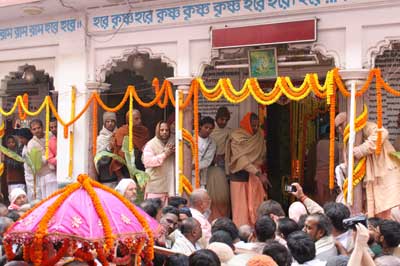 The cold of the mid-winter morning was now breaking, and the sun was beginning to give its soothing, and strengthening warmth, as if to support the deep and sober mood of the two large kirtana parties accompanying Srila Gurudeva. Gurudeva then led the devotees from Sri Devananda Gaudiya Matha to the Ganges some twenty minutes away. Some gently sprinkled his lotus-like body with Ganges water, as Sripad Tirtha Maharaja lead us in the chanting of mantras invoking auspiciousness and glorifying the Ganges.

Srila Gurudeva then lead the sankirtana back to Sri Kesavaji Gaudiya Matha, as hundreds of residents of the holy dhama assembled on roadsides and rooftops to offer their pranam. Many elderly onlookers wept and others folded their palms in gravity and respect, acknowledging the intense pain of separation that Srila Gurudeva's followers were experiencing. At different times, individual devotees wept bitterly. 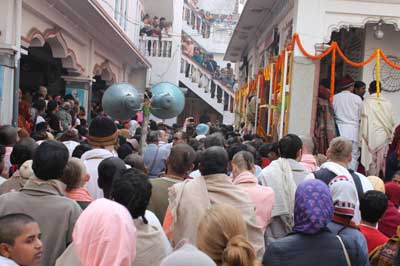 After arriving at the Matha, Srila Gurudeva's divine body was readied for entering samadhi. What is the meaning of samadhi? Srila Gurudeva himself had explained this years before. "Sama means 'the same' and dhi means 'intelligence.' When a pure devotee departs from this world, he enters the same position as the personal associates of his worshipful Deity – with equal intelligence, beauty and qualities." Gurudeva also said that the worshipful Deity of our guru-parampara is Srimati Radhika, and that when our acaryas enter samadhi, they serve Her under the guidance of Her personal associates, the manjaris, headed by Sri Rupa Manjari.

Several Indian and Western sannyasis and brahmacaris brought Srila Gurudeva's cinmaya body from the palanquin to the temple room where they performed his abhiseka (sacred bathing ceremony) with pancamrta, meaning honey, milk, sugar, ghee, yoghurt, and Ganga water, as well as with rose water and aguru oil. They then brought him outside and dressed him with new sannyasa cloth. Sripad Madhava Maharaja and Sripad Tirtha Maharaja anointed his body with tilaka, and with sandalwood paste applied with the stems of flowers they wrote the samadhi mantra and other sacred mantras on his chest. Arcana, arati, and three extremely large plates, prepared by Sriman Premananda Prabhu, of various sweets were offered. 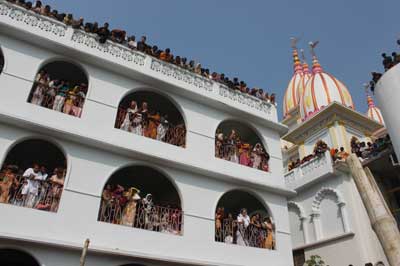 Meanwhile, the rest of the devotees watched as the outdoor samadhi area under Gurudeva's bhajana kutir was being prepared according to all the rules and regulations of Vaisnava sastra. Several bhajanas were sung at this time, including "Vraja jana mana sukha kari radhe syam syama syam." At different times, individual devotees, sometimes a sannyasi, sometimes a brahmacari, sometimes a grihastha man, and sometimes a lady, wept bitterly.

Srila Gurudeva's completely supple divine body was carried into the excavated samadhi area and then gently seated in the lotus position. During his manifest presence in this world, Srila Gurudeva mercifully and lovingly accepted, without discrimination, the offerings and services of all. And now, also, he accepted the loving offerings of all, as, throughout the ceremony, devotees on balconies, rooftops and the ground rained a constant stream of flower petals, flowers and garlands, bouquets, the cintamani dust of Sri Navadvipa-dhama, salt, tulasi leaves and hearts. Devotees from other Mathas also assisted in the ceremony. If anyone would ask, "Who placed Srila Gurudeva's transcendental body in Samadhi?" we would have to reply, "It was hundreds of devotees." 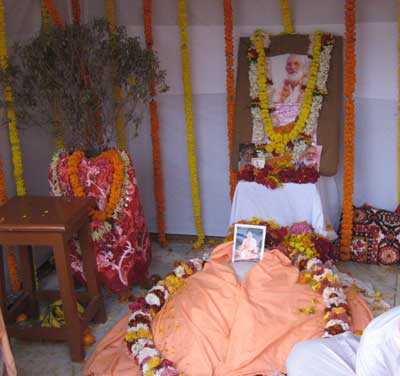 As the devotees sang "Je Anilo Premadana," the dug-out area was filled and a small mound made. A large tulasi plant was placed on top and the mound was decorated with flower garlands and hundreds of sticks of incense. The devotees performed kirtana as they circumambulated Srila Gurudeva's samadhi. Several devotees then sat quietly before the samadhi, some softly sang bhajanas, and some chanted japa. A beautiful blue cloth was hung above the samadhi to shade it. A few hours later, a temporary samadhi of corrugated tin, with a gate at the front, facing the road was erected. The outside walls are painted saffron and soft white sheets line the inside walls.

That night, after bhajanas and arati, sannyasis and other senior devotees offered their puspanjali – their heart's offerings of glorification of Srila Gurudeva. Their homages contained conclusive sastric truths, remembrances of Srila Gurudeva's transcendental pastimes, and his desire that all the devotees in his International Pure Bhakti Yoga Society continue their sincere practice of bhakti and their cooperative effort to serve to him with mutual love and affection.

Srila Rupa Gosvami, Srila Sanatana Gosvami, Srila Jiva Gosvami, Srila Visvanatha Cakravarti Thakura, Srila Narottama dasa Thakura, Srila Bhaktisiddhanta Sarasvati Thakura Prabhupada, Srila Bhaktivedanta Svami Prabhupada, and all the pure acaryas in our disciplic line from Srila Rupa Gosvami are worshipped at their Samadhi mandiras. They are also present in their books, in their instructions, in their pure devotees, in the holy name, in the proper honoring of prasadam, in devotees' dealings of mutual honor, respect, and affection, and in every atom. How every atom? Sri Sri Radha-Govinda are in every atom (andantarastham paramanu cayantarastam, govindam adi purusam tamaham bhajami.) All of our acaryas are serving Radha-Godinda in their manjari forms. Similarly with Srila Gurudeva. He is always with us and watching us, with an unflinching desire to guide us.

P.S. Srila Gurudeva states in his Vilap-kusumanjali darsana of 1991: "There are two kinds of bhajana. The first is in vipralambha-lila, and that is performed by chanting and remembering the pastimes of viraha, separation. The second is in sambhoga-lila, and it is performed by remembering the pastimes of milan, meeting. Although the gopis and Vrajavasis always like to meet Krsna, He plays in such a manner that they will enjoy vipralambha-rasa. The sadhaka should cultivate vipralambha bhava: "I am not seeing Krsna, I am not seeing Srimati Radhika, I am not seeing Vraja, I am not seeing anything!" The sadhaka should always feel separation as Raghunatha dasa Gosvami has shown here—separation from Krsna and especially from Srimati Radhika.

"In many slokas Dasa Gosvami has also lamented in separation from Srila Rupa Gosvami. At the time of Rupa Gosvami's entrance into aprakata-lila, he composed this sloka:

["Now that I no longer have the sustainer of my life, the land of Vraja has become empty and desolate, Govardhana Hill has become like a great python, and Radha Kunda has become like the gaping mouth of a ferocious tigress."]

"He has also lamented in separation for his siksa-gurus: "I'm so unlucky. First Sri Caitanya Mahaprabhu departed from this world and left me behind.

"Although our Gurudeva has also entered his aprakata-lila, we remain in this world in a very pleasant manner. On special days, his avirbhava (appearance day) and tirobhava (disappearance day), the occasion comes that we may remember him. At that time, however, we are involved in arranging the utsava, festival. There is very little chance to realize that separation. Only while we are speaking something about him, a drop of tear may come in our eye—and it may not come. If the festival is very elaborate, there will be no tears. So many functions must be managed, such as the abhiseka, puja, and distribution of maha-prasadam to Vaisnavas. We arrange these festivals mainly for the people in general, for those who have no intimate relation with him. But we should do something so that a feeling of separation will come within our own hearts, and that is called bhajana. 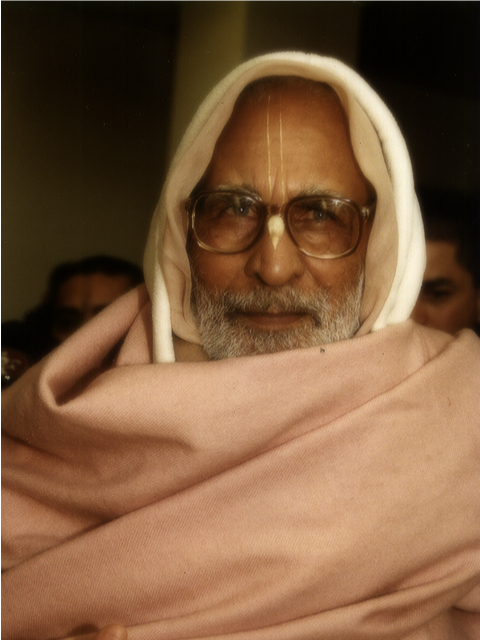 "Who will feel separation? Those special persons who have realized their immense obligation and indebtedness to gurudeva for all they have received, and who have rendered much service to him with visrambha-bhava, intimacy. They will weep. The consideration that, "I'm so low and my Gurudeva is in such a high stage" will not be there. Awe and reverence will not be there; otherwise one cannot weep. In sastra it is said, visrambhena guror seva—the sevaka performs such intimate service to gurudeva that gurudeva remains always pleased with him. The guru will not consider for even a moment that, "He is my servant and disciple." Instead he will feel that, "He is my heart." Sri Isvara Puripada, the disciple of Srila Madhavendra Puri, and Govinda, the disciple of Isvara Puri, were servants of this caliber. Although this is a rare relationship, it is absolutely necessary for raganuga-bhakti. Without a relationship like this, we cannot weep like Srila Raghunatha dasa Gosvami.

"Separation from gurudeva will be experienced on different levels. When we consider how merciful he was and how much greater he is than ourselves, we feel a certain type of sentiment. However, when we remember how near and dear he was and how much he loved us, then we will weep profusely for him.