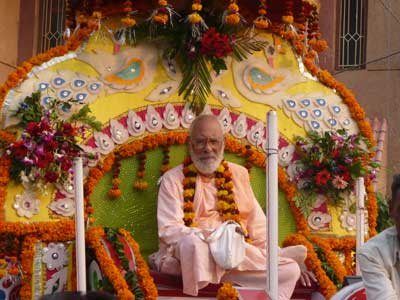 Sripad BV Narayana Maharaja
In Govardhana, India, under the divine guidance of Srila Bhaktivedanta Narayana Gosvami Maharaja, the 2007 Vraja Mandala Parikrama is successfully underway, with over 1,000 devotees in attendance.

Before coming to take shelter in the lap of Giriraja Govardhana, Srila Narayana Maharaja and the international pilgrims spent the first two weeks of the parikrama at Gopinath Bhavan in Vrndavana. There, Srila Maharaja enriched the pilgrims’ hearts by giving discourses every morning and evening – in the mornings from Sri Damodarastakam and in the evenings from Sri Bhakti-rasayana.

On the evening of November 4th, the annual parade from Ananda Dhama temple was held, and a lively procession took place through the streets of Vrndavana. Srila Maharaja traveled by a gorgeously decorated chariot pulled by horses, and over 800 devotees danced and chanted in kirtana. 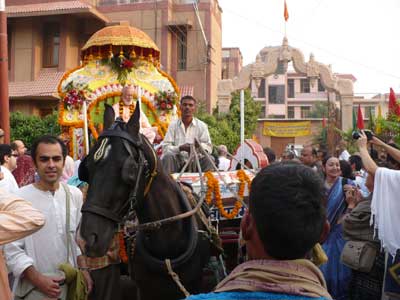 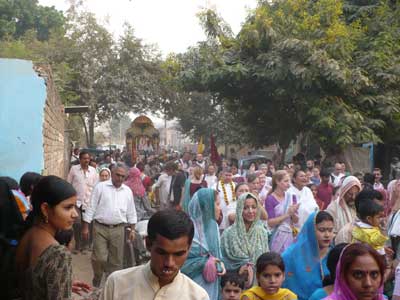 
Forty-five devotees arrived from mainland China on that same day. On the next day, November 5th, the now seventy Chinese and Hong Kong devotees had darsana with Srila Maharaja in his room in Gopinath Bhavan. 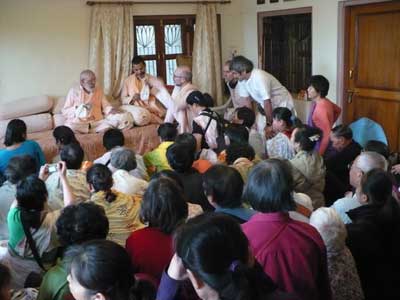 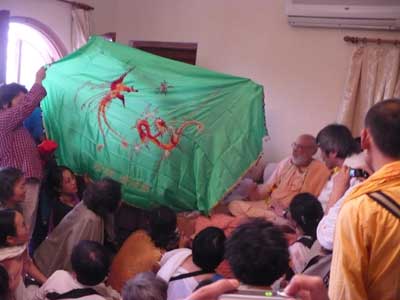 One Chinese devotee made this cloth with 2 traditional dragons on it, and written on the bottom: “Hare Krsna” in Chinese. 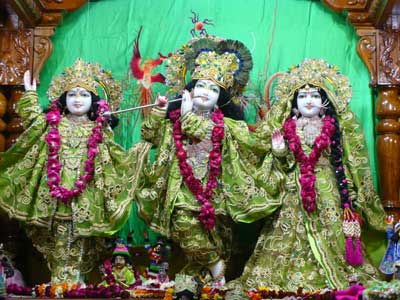 A Buddhist monk from China asked Srila Maharaja if after this life we merge into the spiritual world as an iceberg merges into the water when it melts.

Srila Maharaja said, “ONE = O-N-E (three letters)”, and then asked, “How many letters are in the word one in the Chinese language?

Srila Narayana Maharaja then said, “But that one Chinese letter has so many lines and dots; so in this world nothing is ‘one’. The Supreme Lord, all souls and so many other things are there. All the particles of water in a river are separate, but it seems that the river is ‘one’ water.

“My heartly blessings to you all.” 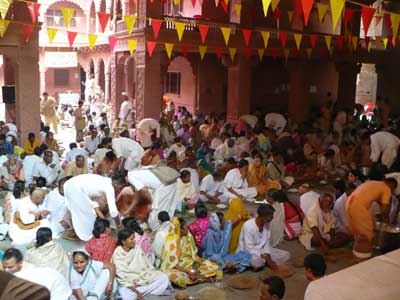 The parikrama party moved from Vrndavana to Govardhana on November 7th, and that evening Srila Maharaja told his audience of over 1,200: “By the special mercy of Sri Sri Gandarvika-Giridhari, we visited so many forests in Vrndavana, where we remained for about 14 days. (Some of the places visited were: Bhandiravana, Bhadravana, Mathavana, Mana-sarovara, Talavana, Kumudvana, Madhuvana, Nidhuvana, temples of Sri Radha-Ramana, Sri Radha-Gokulananda, Sri Radha-Gopinatha and Sri Radha-Syamasundara, Dhira-samira, Vamsi-vata, Sri Gopesvara Mahadeva, Sri Govindadeva Temple, and Kesi Ghat.) 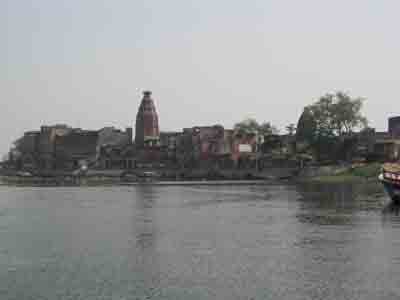 “After that, by the special mercy of Sri Giriraja Govardhana, the very dear beloved servant of Krsna and the fulfiller of all desires, we have reached Sri Giriraja’s lotus feet. We will stay here for about sixteen days, and we will visit all the nearby forests like Varsana, Nandagaon, Surya Kunda, Yavat, Choti Carana Pahari, Kokilavana, and many others.

“Do not take any silas (small rocks of Giriraja Govardhana, which are worshippable by devotees as non-different from the complete Govardhana). If you want to take one, then only do so by the order of Guru and Vaisnavas, and you must replace it with gold of the exact same weight. If you do not follow these instructions, I cannot tell what will happen to you. Some Western devotees want to take four, five, or six Govardhana silas, but they should not do this.

“On Purnima there is nowhere to even stand in Govardhana. People pay obesiances 108 times in one place before moving forward one body-length, and again they perform the same anount of obeisances, and in this way circumambulate Sri Giriraja. Thus, their parikrama takes a very long time. Why do they do this? For material sense gratification. How unfortunate these people are – they are not desiring krsna-bhakti as the gopis do, and as the gopis request it from Giriraja as their only desire.

“In Goloka Vrndavana, Krsna once said to Srimati Radharani, ‘I want to go to the Earth planet. Please come with Me.’ Radharani replied, ‘I will not go alone. Yamuna-devi and Giriraja Govardhana must come with us. Everything here must first appear there; then I will go.’

"That is why Giriraja is not ordinary – He has come from Goloka Vrndavana." 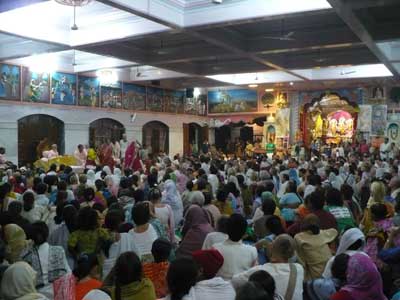