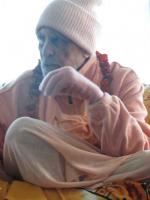 [Srila Narayana Gosvami Maharaja:] No harm. But, you can chant the holy name, even in such a situation.

[Jagannatha dasa:] How do we get the desire for bhakti?

[Srila Narayana Gosvami Maharaja:] Serve Vaisnavas fully and totally, with your entire energy, and they will give you bhakti. They are very merciful – there is no other way.

Do you know what is raganuga and what is ragatmika? Is there a difference?
Let us suppose that, by the mercy of Guru and Gauranga and Vaisnavas, you are beginning to have some greed to serve Sri Sri Radha and Krsna – like the sakhas (cowherd boys) such as Sridama and Subala, or like Mother Yasoda and Nanda Baba in vatsalya-rasa, or in madhurya-rasa (amorous love) like the gopis. If you have greed by their mercy, and you are very lucky, then – even if you are full of anarthas or you have a loose character – if you begin to follow any of these associates, then you are called raganuga. At that time, even if a person is not a sadhaka and has so many anarthas, he or she will be called raganuga in its beginning stage.

Those who are siddha (perfect in the realization of his relationship with Krsna) – those who need not do any sadhana and whose rasa is fully manifest in their hearts – they are called ragatmika, or eternal associates of Sri Krsna.

A raganuga devotee is a sadhaka, and a ragatmika associate is siddha; there is a very big difference between them.

[Krsna-kanta dasa:] Can ragatmika associates be in this material world?

[Srila Narayana Gosvami Maharaja:] They can come with Krsna for assisting Him in enacting His sweet pastimes. They come only with Krsna, to serve Him. Also, if Krsna gives them an order that: “You should go to the material world as My representative”, then they can come.

[Sripad Madhava Maharaja:] He is asking: If one has realization of his siddha-deha, is he called a ragatmika-bhakta or not?

[Srila Narayana Gosvami Maharaja:] Not necessarily; He may still be in the practicing stage. All anarthas may have not yet been removed. Even if he has achieved rati or bhava, he is not siddha-ragatmika. In fact, even when he takes birth in Vraja (in this or any material universe) as a gopi or gopa and serves Krsna, still he is not ragatmika. After that, Yogamaya will give him his birth, name, and all other spiritual designations in aprakat (transcendental) Goloka Vrndavana; there he will be ragatmika.

[Sripad Madhava Maharaja:] Even if a ragatmika-bhakta comes to this world and practices bhajana, how can we recognize him? It is impossible.

[Srila Narayana Gosvami Maharaja:] You cannot; only a high class raganuga Vaisnava can realize who he is.

There are some symptoms of a raganuga-bhakta who is situated even in the beginning stage of bhava-bhakti. Such a devotee can recognize the ragatmika associate of Krsna:

["When the seed of ecstatic emotion for Krsna fructifies, the following nine symptoms manifest in one's behavior: forgiveness, concern that time should not be wasted, detachment, absence of false prestige, great hope, intense eagerness, a taste for chanting the holy name of the Lord, attachment to descriptions of the transcendental qualities of the Lord, and affection for those places where the Lord resides-that is, a temple or a holy place like Vrndavana. These are all called anubhava, subordinate signs of ecstatic emotion. They are visible in a person in whose heart the seed of love of God has begun to fructify.” (Caitanya-caritamrta, Madhya-lila 23.18-19)]

So many people come to me and say, “I have prema. I have seen Krsna.” I tell these people, “You are foolish and bogus.” There are symptoms. If anyone has really taken darsan of Krsna, he cannot remain in a material body. The transcendental body will at once manifest and the material body will disappear.

[Sripad Padmanabha Maharaja:] Do we recognize that the acaryas in our line from Sri Caitanya Mahaprabhu’s time to the present have descended down from Goloka Vrndavana?

[Srila Narayana Gosvami Maharaja:] We can do so, because Kavi Karnapura Gosvami has given the names of the associates of Sri Caitanya Mahaprabhu. For example, Sri Raya Ramananda is Visakha-devi, Sri Svarupa Damodara is Lalita-devi and Srivas Pandit is Sri Narada Muni. They are ragatmika, but pretending to be sadhakas.

[Sripad Padmanabha Maharaja:] Then, after Mahaprabhu’s time, for the past 500 years coming down in our acarya guru-parampara, can we consider any of them as ragatmika-bhaktas?

[Srila Narayana Gosvami Maharaja:] Yes, but they are not equal. Srila Bhaktivinoda Thakura is said to be Kamala Manjari, the potency of Sri Gadadhara Pandita. But how can we know about others? Who was Gaura-kisora dasa babaji Maharaja? Has any name been told to us? So there are some differences.

[Ajaya Krsna dasa:] During our Janmastami and other grand festivals, is it all right that we invite professional people to perform, or not?

[Srila Narayana Gosvami Maharaja:] In Mathura, we observe Janmastami. We call all the top professional radio and television singers and musicians who can play songs about Krsna on tabla and so many other instruments. We also call many top learned scholars, some of whom have degrees in seven subjects. For example, we invite Vasudeva Caturvedi, who is one of these scholars. There are seven official gradations of acarya (teacher) degrees – Purana, Kavya, Vedanta, Canda, Nyaya, Vyakarana, and Sahitya – and certain acaryas have degrees in all these subjects. In Vraja, in all of Uttar Pradesh, and in all of India, there are no scholars like these. In all of Vraja, no one can speak in the Sanskrit language as they do. Yet, they see me like their guru.

Why do we call them? We call them in order to attract more people to come to our programs. When they come, a very, very big crowd also comes. At that time I speak hari-katha to inject them with Krsna consciousness, as I am here injecting you all. I inject the audience, the scholars, and the musicians. I also give the speakers donations and sweets.

After some time, practically all of Mathura has come to me by this process.

[Ajaya Krsna dasa:] During Janmastami we put saligram in a big cucumber, and then, at the moment of Krsna’s birth, we take it out , to symbolize Mother Yasoda giving birth to Krsna. Some devotees objected to this. They said this is not bona fide.

[Srila Narayana Gosvami Maharaja:] On Janmastami night, at midnight, not only in Mathura, but everywhere in Vraja and Uttar Pradesh and Bihar, this is followed. We also follow this. We keep a saligrama in a big cucumber.

[Madhava Maharaja:] Or a big fruit like a watermelon.

[Srila Narayana Gosvami Maharaja:] But especially we use the cucumber. Then, at the time of Krsna’s birth, we take the saligrama out from the cucumber. We consider that Mother Yasoda is giving birth to Krsna. So this is not apasiddhanta (against the conclusions of Vedic scripture). Also, this attracts so many people to attend, in order that I can inject them with spiritual impressions.

[Madhava Maharaja:] By that gathering, new devotees will come. Otherwise the current will stop.

We are calling everyone to the temple, in order that they will hear hari-katha, but why do we distribute so much delicious prasadam to them? This is not hari-katha, so why do we do this? It is to attract them. They are rich persons, but still we give it to them. By that prasadam, they will get sukriti.

Do you understand now?

[Brajanath dasa:] I have read in scripture that raganuga-bhakti begins when our intelligence is purified.

[Srila Narayana Gosvami Maharaja:] It does not depend on intelligence. It depends on one’s past births’ activities and impressions. Attachment to raganuga-bhakti comes by serving and hearing. It will never happen by intelligence or by purification of heart. Bhakti is different. It may be that one has a good character, that one is honest and free from bad behavior, or that one is very learned – like the mayavadis who are learned, with no worldly ambition – still, that person may have no sukriti to be able to follow even vaidhi-bhakti, what to speak of raganuga-bhakti.

[Brajanath dasa:] If the first stage of bhajana is guru-padasraya (taking shelter of the lotus feet of a bona fide guru)….

[Srila Narayana Maharaja:] First he will hear pastimes related to Krsna (all tattvas) from pure Vaisnavas, then some sukrti will come, and after that he will have a desire to hear topics related with raganuga-bhakti. They will think, “I want to be like these associates of Krsna.”

[Brajanath dasa:] Can anyone who does not properly take shelter of a sad-guru be raganuga?

[Brajanath dasa:] But if one takes shelter properly, even if one has not such good character, he can have it?

[Srila Narayana Maharaja:] Yes, bhakti is like Krsna Himself – independent.
bhakti svatantra avalambhanana tahi adhina jnana vijnana. [“Bhakti is completely independent and does not need any help from others; only by bhakti can we obtain theoretical and realized knowledge”]

[Brajanath dasa:] Nowadays, some devotees are propagating the path of natural bhakti, but it is hard to understand how they are taking shelter of guru.

[Srila Narayana Gosvami Maharaja:] Yes, raganuga-bhakti is very rare. Muktanam api siddhanam/narayana parayanah/sudurlabah prasantatma/kotisv’ api maha-mune. [“O great sage, out of many millions of liberated people who are free from ignorance, and out of many millions of siddhas who have nearly attained perfection, there is hardly one pure devotee of Narayana. Only such a devotee is actually completely satisfied and peaceful.” (Srimad-Bhagavatam 6.14.5)]

[Bhakta James:] What are the ways by which a conditioned soul can recognize the pure Vaisnava?

[Srila Narayana Maharaja:] A conditioned soul cannot recognize a pure Vaisnava. He should hear from Vaisnavas, and by regularly hearing, that Vaisnava’s mercy will come in his heart. Then, little by little by little, he will begin to realize. Otherwise it is not possible.

[Vraja-kisori dasi:] Srila Gurudeva, he’s wondering how – if conditioned souls can’t recognize a self-realized Vaisnava – how can he accept one?

[Srila Narayana Maharaja:] You should digest (understand) what I have told you in all my classes. Then there will be no question.