A Trip to Nepal

[Respected Harikatha Readers, Please accept our humble obeisances. All glories to Sri Guru and Gauranga. On August 17, 2009, Srila Bhaktivedanta Narayana Gosvami Maharaja and his party traveled from Delhi to Nepal for a five-day Harikatha festival. The following is a report on the events of that festival, written by Srila Maharaja’s disciple, Sulata dasi of Vrndavana. To view movie clips from Nepal, please visit www.purebhakti.tv]

Since his childhood, Srila Gurudeva had nurtured a strong desire to visit Janakapura (in Nepal), because this is where Sita-devi lived with her father Janaka Maharaja and her mother Queen Sunayana. This is also where Her marriage and other wonderful pastimes took place. Before meeting his Guru Maharaja, Srila Bhakti Prajnana Kesava Gosvami Maharaja, Srila Gurudeva worshiped Sri Sri Sita-Rama with great love and devotion. As you can imagine, this was a very special trip for him.

In the beginning of his first discourse, Srila Gurudeva explained that although he has circled the globe many times preaching Sanatana-dharma in countries like Australia, Brazil, England, America, and all over Europe, he had never been to Janakapura. Now, by the assistance of Somnath prabhu, he would be boarding a plane to go there on the 20th morning. 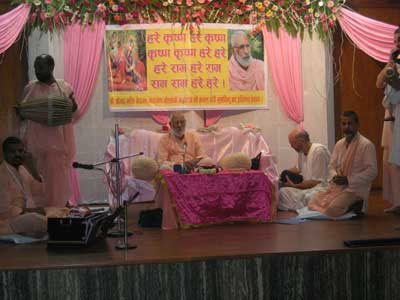 Left: Katmandu, at the City Cultural Center where the two-day program was held.

During his discourse, Srila Gurudeva explained the perils of living in Kali-yuga and the means to escape them. He said that nowadays most people labor to accumulate wealth and acquire a good position, but these things do not benefit the soul. Monetary earnings cannot help the soul. Everyone is thinking, “I am this body,” but this is a false idea. Our real identity is the soul within the body. Both Paramatma (the Supersoul) and the atma (individual soul) reside together within the body. The atma is like the passenger and the Paramatma is like the charioteer. Most people do not understand these truths because they have forgotten Krsna.

These days, if a wife does not please her husband’s senses or vice versa, they divorce and get a new partner. They do not care how much pain their actions cause their children.

Then Srila Gurudeva posed the question, “How can we solve the problems we face in Kali-yuga?” He then answered that one should take full shelter of Sri Guru, continuously serve him, try to give up all material attachments, and develop love for Krsna. These are our topmost duties, and by carrying out these duties we will receive Krsna’s causeless mercy.

He said that one should understand and have faith that all sastras (Vedic scriptures), including Srimad-Bhagavatam, reside within Sad-Guru, the bona fide Guru.

By serving and associating with that type of Guru, we will get bhakti. What kind of bhakti do we want?

He explained in simple words the meaning of this verse. All sastras recommend that one have an uninterrupted devotional mood and that all of one’s activity should be performed with the aim of pleasing Krsna and Sri Guru. To illustrate this point, He very narrated the pastime in which Mother Yasoda threatened to hit Krsna with a stick because she wanted Him to stop stealing butter.

To clear away any confusion in the minds and hearts of the listeners, he explained that although externally Krsna was crying, within Himself He was feeling great pleasure from hearing His mother call Him a thief for stealing the butter. Mother Yasoda was thinking “He is only a small boy. He is not stealing anything more valuable than butter. Still, if I don’t punish Him now, He may become a big dacoit in the future.” This ‘punishment’ was accepted by Krsna as uttama-bhakti, or pure bhakti, because Mother Yasoda’s actions were motivated by the desire to make Krsna’s life successful and happy. Her sweet, loving mood (madhurya) was so strong that it completely covered Krsna’s opulence (aisvarya). She was not thinking that Krsna is God, but that He is only her beloved son.

Srila Gurudeva then described the five types of devotees and devotion. As I looked around at the audience, I could see that everyone present was listening with rapt attention. It was quite amazing to witness how, by his powerful harikatha, he so quickly captured their hearts, which is part of his process for loosening the knot of material attachment.

The next morning, as we were all sitting in the airport waiting to board the plane for Janakapura, torrents of heavy rain began to fall. I began to wonder if the airline staff would allow us to take off in such terrible weather. Miraculously, just before we boarded the plane, the rays of sunshine began to push their way past the dark clouds and the rain stopped. After we were all seated comfortably on the plane, I was surprised to see that the sky had turned pale blue Suryadeva, the Sun-god, was bathing everyone with his warm rays.

When we arrived in Janakapura, Srila Gurudeva told the Mahant at Sri Sri Sita-Rama’s temple complex how he had prayed to Sita-devi to ask Indradeva, the god of the rains, to stop the rain, and by Her mercy he did so. The Mahant, who treated Srila Gurudeva with the utmost respect, replied, “How could Janaki ignore a prayer from you? Your arrival has brought us so much auspiciousness.” 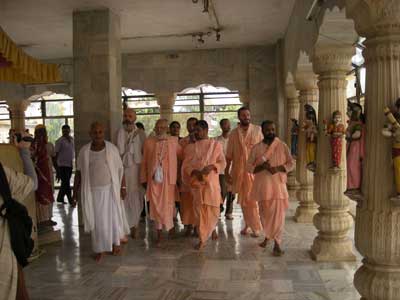 Janaka Pura, The wedding hall next to the Mandir. This is where Lord Ramacandra and Srimati Sita Thakurani's wedding ceremony was performed. 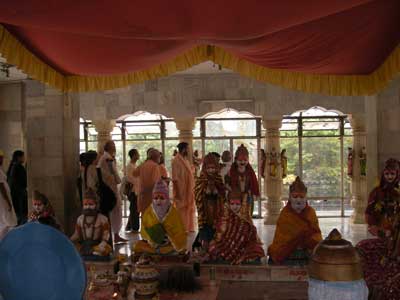 Circumambulating Sri Sri Sita-Rama, along with six sages, in the Lord's wedding hall. 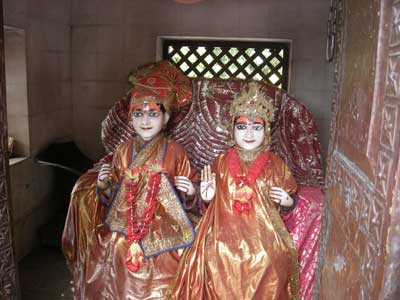 Srila Gurudeva then proceeded to the main temple where Sri Sri Sita-Rama were being worshiped. We circumambulated the main temple, stopping at a smaller temple of Janak Maharaja and Queen Sunayana. 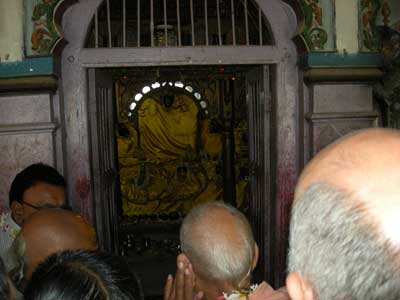 When we finished our parikrama, the Mahant invited us for prasadam. The prasadam hall was up a steep flight of stairs, so Srila Gurudeva stayed outside and sent the rest of us upstairs to take prasadam.

The Mahant took us to a large room which housed over 125,000 salagram silas, which was really an amazing sight. 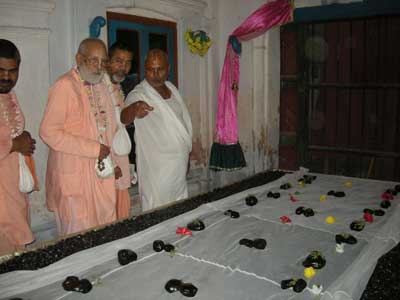 The Mahant is showing Srila Gurudeva the 125,000 silas - mostly covered by the white cloth - in the main Mandir in Janakapura. 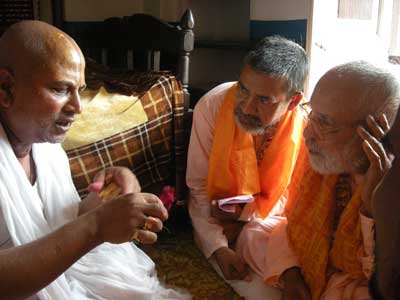 Srila Gurudeva was seated in a room next to the prasadam hall, and the Mahant brought what looked like a small pebble covered by red powder. He explained that it was gorocana from the hoof of a cow, and a pearl from the head of an elephant, both of which are produced by rainfall during the auspicious stellar constellation called svati-naksatra. We all gathered around, fascinated.

I cannot speculate on the deep moods in which Srila Gurudeva was immersed in on that day. I do not have the good fortune to understand all these things. I do know that I felt very privileged to accompany him on such a journey. I had the great opportunity that day to observe a very remarkable, humble, merciful, soft personality who was filled with devotion for his worshipful Lord and full of compassion for those souls who are suffering in separation from the Soul of their soul. Although all tattva (established philosophical truth) is manifest in the heart of our beloved Srila Gurudeva, still, he listened to the words of the Mahant with humility and interest, treating him with respect and kindness.

The Mahant was quite moved, and when Srila Gurudeva offered him daksina, he refused to take it. At one point, when some beggars were trying to disturb Srila Gurudeva, he calmly told Sripad Madhava Maharaja to give them some rupees. I never saw him get angry or frustrated.

After taking prasadam, a small group of us accompanied Srila Gurudeva to Dhanush-dharma, where one part of the bow that Lord Rama broke can still be seen in the form of a large stone which grows one mustard seed in size every day. 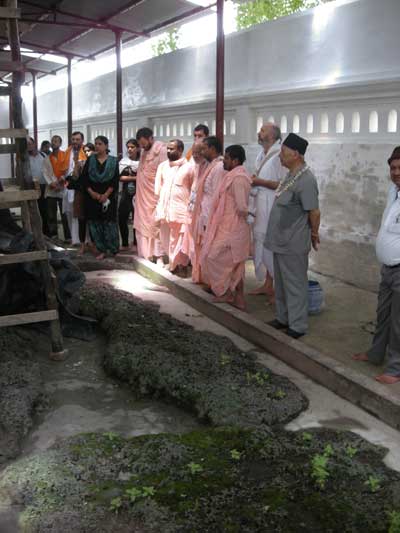 Darsan of the bow that was broken by Lord Rama

The next day, in his final class, Srila Gurudeva briefly explained the Tenth Canto Srimad-Bhagavatam and ended with narrations of the glories of the Vraja gopis, and especially the glories of Srimati Radhika.

About twenty-five people took initiation, and from the family of Ramacandra Prabhu, the organizer of the festival, another fifteen people. As always, the local devotees were left with a mixture of happiness and sadness when Srila Gurudeva departed, happy that he had blessed them by visiting their country, but also sad to see him leave so soon.

The highlight of this trip for me was to witness Srila Gurudeva’s good qualities, and to see him in such a relaxed atmosphere distributing his smile and mercy to all. The thought came to me that it is not possible for an ordinary person to manifest such exalted behavior. We are all so fortunate to be accepted by such a personality. 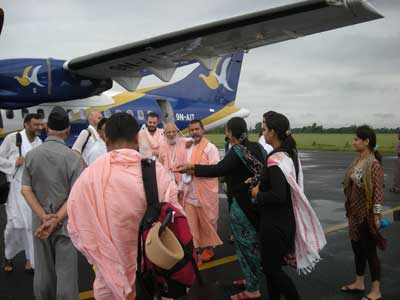