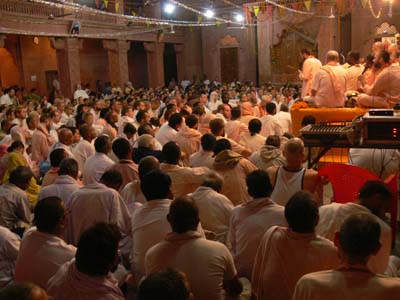 The annual Kartika Vraja Mandala Parikrama began on October 4, 2009, with over 1,000 pilgrims from India and all over the world in attendance.

The first day of parikrama, which was also the first day of Kartika, was the divine disappearance day of Srila Narayana Gosvami Maharaja’s diksa-guru, Sri Srimad Bhakti Prajnana Kesava Gosvami Maharaja. Srila Maharaja glorified him and then offered him arati. Sannyasis and other speakers glorified him throughout the day, and then again in the evening during the class. 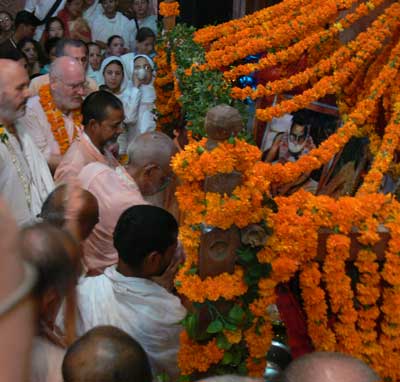 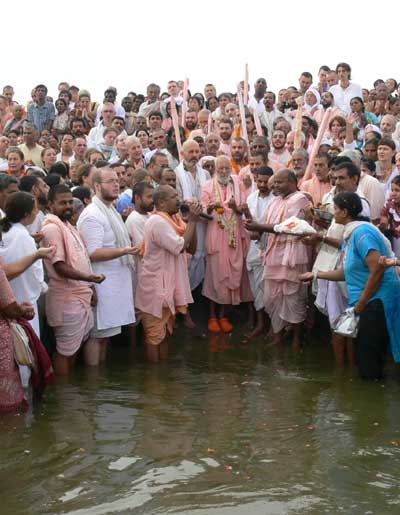 After the morning glorification, Srila Maharaja led the devotees to the Yamuna River to make their sankalpa (vow) for the month. 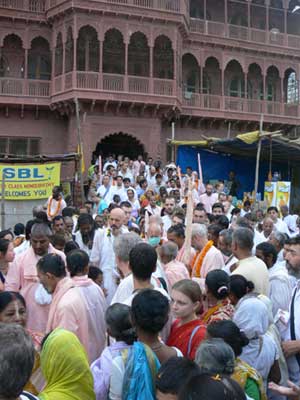 The second day of parikrama brought showers of rain (unusual for this time of year), thus cooling off the intense summer heat.

Each morning after the singing of beautiful devotional bhajanas, Srila Maharaja speaks from the book “Sri Damodarastakam,” which is an elaborate commentary of the eight verses of the song of the same name. Srila Maharaja explained that this song, written by the great sage Sri Satyavrata Muni, is an explanation of the section of Srimad-Bhagavatam regarding Mother Yasoda binding child Krsna with the ropes of her love and affection.

For the first few evenings, just after the evening bhajanas, Srila Maharaja speaks about the pastime places visited by the devotees on that day, and for the next evenings he spoke on the reasons for the appearance of Lord Caitanya. Besides giving his own discourse, he calls on several other devotees to speak as well.

Following are a few short excerpts of Srila Maharaja’s class, spoken by him in Bengali and intermittently translated by Sripad Damodara Maharaja. On October fifth, the second morning of Kartika, Srila Maharaja said, “Every year we discuss Damodarasktam, so this year we will describe it briefly. This Damodarastakam by Satyavrata Muni is eternal. It existed before the creation, and Satyvrata Muni manifested it just as Srimad-Bhagavatam is also eternal and appeared in the meditation of Srila Vyasadeva. In Damodarastakam, we see that the mood of Satyvrata Muni gradually increases as we progress through its eight verses.

“For example, in the first verse he expressed the mood of a servant – he offers his obeisances. Who will offer obeisances? Will Krsna’s parents Mother Yasoda and Nanda Baba, or His cowherd friends Sridama or Subala offer obeisances? Only one who considers himself a servant will do so. Then, in later verses, his mood develops to vatsalya-bhava, a parental mood…

“The author of “Sri Damodarastakam,” Srila Sanatana Gosvami, makes an important point. He says that even though Narada Muni is the best of the Vaisnavas, he still had so much greed to hear Srimad-Bhagavatam from Srila Sukadeva Gosvami. Therefore, whenever Srimad-Bhagavatam is spoken, Sri Narada goes there to hear. Because Srimad-Bhagavatam is ever-fresh, no matter how many times he hears it, he is never satiated. In the same way, even though we have been hearing this Damodarastakam every year, we should not be satisfied. We should want to hear it again and again.”

Srila Maharaja then set the scene: “Krsna has grown to about two and a half years old, and He is playing with His friends such as Sridama, Subala, and Madhu-mangala. At this time, He and His friends have no knowledge about whether or not one must wear clothing; they are all playing together naked.

“All the cowherd-boys joined with Krsna as He began His enchanting and heart-stealing childhood activities of stealing butter and yoghurt from the neighboring gopis. They would go to those gopis’ homes and release their calves, who would immediately run to drink the milk from the udders of their mother cows. The gopis would then run there to stop the calves from consuming all the milk, at which time Krsna and His friends would steal butter and yoghurt in the gopis’ houses. Hearing about such thefts from the other elderly gopis, Mother Yasoda would wonder, ‘Why is my son stealing? I have 900,000 cows. There is no shortage at my home.’

“Once, when Krsna went to the house of a gopi to steal yoghurt, she caught Him red-handed and asked Him, ‘Are you stealing?’ ‘No, I am not stealing,’ Krsna replied. ‘Then what are you doing here?’ she challenged. ‘I am looking for my lost calf in your yoghurt pot,’ Krsna replied. He then pulled out a small marble calf from the yoghurt pot.” 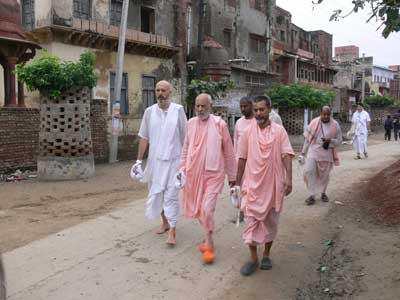 After each morning’s class, Srila Maharaja would go for his morning japa walk. At that time the devotees would take breakfast and prepare to leave for parikrama. On the days that the devotees must take long bus rides to the various pastime places of Krsna, they would leave the temple right after mangala arati, at about 5.30 am. 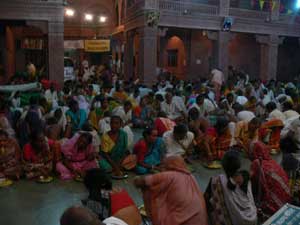 Honoring breakfast prasadam in the temple

By the mercy of Sri Guru and Gauranga, on the second day, the parikrama pilgrims walked to the lake of the serpent Kaliya, called Kaliya-daha. They also visited Srila Sanatana Gosvami’s bhajana-kutira and Samadhi Mandira; the temple of Sanatana Gosvami’s Deity, Sri Madana-mohan; the temple of the eight principle gopis, called Asta-sakhi Mandira. Then, on the second day, among other transcendental places, they took darsana of the place where Sri Krsna decorated Srimati Radhika, called Srngar-vata. 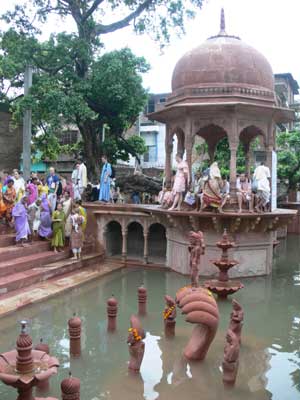 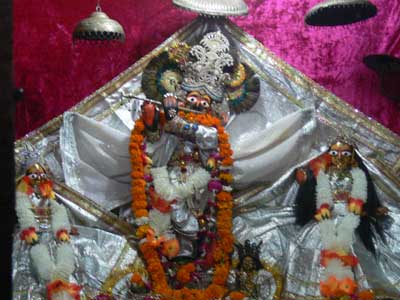 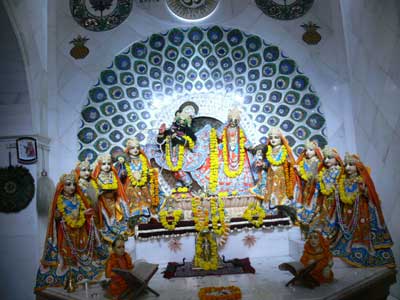 Sri Sri Radha-Krsna and the Asta-sakhis 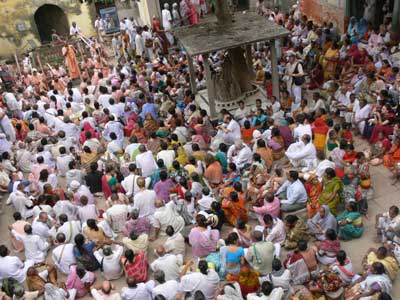 On the evening of October 7th, Srila Maharaja told his international audience, “By the mercy of Sri Caitanya Mahaprabhu and Sri Sri Radha-Vinoda-bihari, we have completed the fourth day of our Vrndavana parikrama. From tonight onward we will discuss the pastimes of Sri Caitanya Mahaprabhu, beginning from His childhood pastimes to the end of His manifest stay in this world, which are described by Srila Krsna dasa Kaviraja Gosvami in his book Sri Caitanya-caritamrta. We will also discuss Sri Rupa-siksa, Sri Sanatana-siksa, and the Lord’s conversations with Sri Ramananda Raya. There is so much tattva-siddhanta (established conclusive philosophical truths) in these chapters. First, however, we should understand why Krsna came as Sri Caitanya Mahaprabhu.

“In the Caitanya-caritamrta it is stated:

["May the Supreme Lord who is known as the son of Srimati Saci-devi be transcendentally situated in the innermost chambers of your heart. Resplendent with the radiance of molten gold, He has appeared in the Age of Kali by His causeless mercy to bestow what no incarnation has ever offered before: the most sublime and radiant mellow of devotional service, the s of conjugal love." (Sri Caitanya Caritamrta, Adi-lila 1.4 quoting Sri Vidagdha Madhava 1.2)]

“Sri Caitanya Mahaprabhu comes after a very long time (carim cirat). There are fourteen Manus in a day of Brahma, and the Lord appeared during the reign of the seventh Manu. In the 28th divya-yuga [*See Endnote] He appears to distribute unnatojvala-rasam sva-bhakti-sriyam, or parakiya-rasa. What is sva-bhakti-sriyam? Sva, meaning ‘own,’ refers to Srimati Radhika, because there is no difference between Srimati Radhika and Sri Krsna Himself. Mahaprabhu came to distribute the sriya, or the beauty, of the prema of Srimati Radhika – which is the highest stage of prema, called madanakya-mahabhava, and which is found exclusively in Her. She is described as a wish-fulfilling creeper of Krsna-prema. The sakhis are the leaves and flowers of that creeper of prema and the manjaris are its manjari buds. If there are no leaves, flowers, or manjaris on the creeper, then that creeper has no beauty at all. Similarly, Srimati Radhika’s sakhis (Her gopi friends) and manjaris (Her maidservants) nourish and further beautify Her amorous pastimes with Sri Krsna.

“Mahaprabhu came to ‘distribute the beauty of Radhika’s prema’ In other words, He came to give to the fortunate living beings the opportunity to serve Srimati Radhika as her maidservant. Many incarnations had come before Him, including other yuga-avataras, but only Krsna in the form of Mahaprabhu can give that most rare and exalted prema.

“He wove a wreath of the holy name and prema, with which He garlanded the entire material world.” Manifestations of Maha-Visnu can distribute the holy name, but they cannot give that highest Vraja prema. Only Krsna can distribute it, in the form of Sri Caitanya Mahaprabhu.” 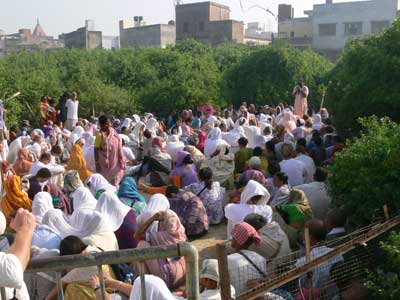 Next morning, October 8th – the parikrama party in the forest of Nidhuvana, where Sri Sri Radha-Krsna perform Their nighttime and early morning pastimes.