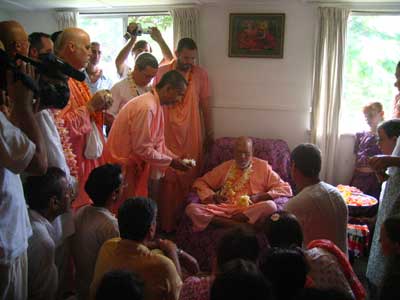 The eleventh Australian Hari-katha Festival with Srila Narayana Maharaja was held in Murwillumbah from February 3-7. The festival began at the Showgrounds, where it had been held in previous years, but on the second day of the festival, torrential rain flooded the Showgrounds. The rains began before Srila Maharaja’s arrival there, continued during his lecture, and began to turn into a flood just after his departure. Several devotees quickly took down the decorations, altar, and kitchen, and the following day set up at the grand and prestigious Murwillumbah Civic Center.

When Srila Maharaja first arrived in Murwillumbah and entered his temporary residence which had been offered to him by his disciple Srimati Nandini dasi, the devotees offered Guru-puja and performed the sacred foot-bathing ceremony. Srila Maharaja then spoke for a few minutes to his assembled followers, about the precariousness of being in a material body and also about the imminence of death. 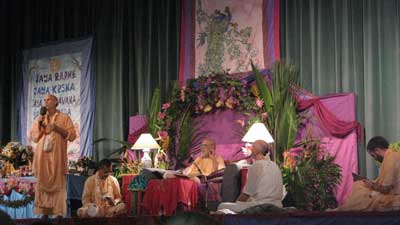 Each evening at the Civic Center, Srila Maharaja discussed the Eleventh Canto Srimad-Bhagavatam. He spoke about the 24 Gurus, the qualities of a Vaisnava, Sri Krsna’s teachings to His intimate associate Sri Uddhava, the meeting of the Nava-yogendras (The Nine Masters of Yoga) with King Nemi, and on the last night he discussed the glories of Srila Vyasadeva and Guru-tattva. 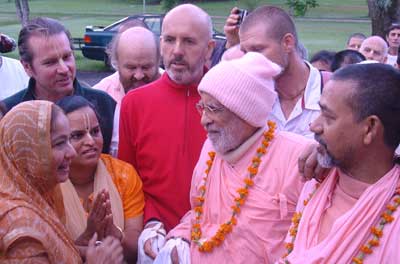 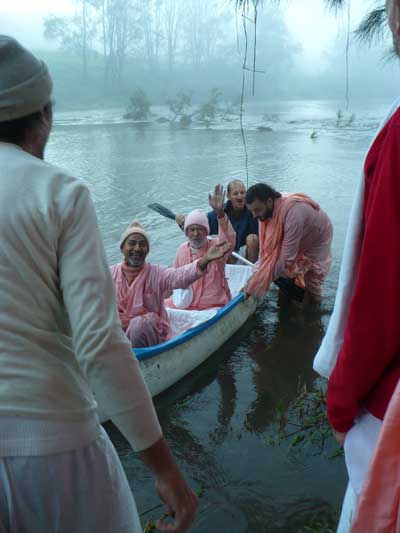 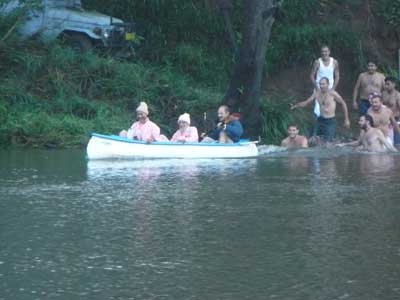 Sriman Mathuranath dasa invited Srila Maharaja to visit his rural temple / asrama across the Tweed River, where several devotees are presently residing and performing their devotional services. The bridge to cross the river had been washed away by the rains, and therefore the only way to reach there was by canoe. After his morning walk the next day, Srila Maharaja went to visit the land – in a tiny canoe. A few devotees swam across to join him there, and the rest waited for him at the bank of the river, to return. 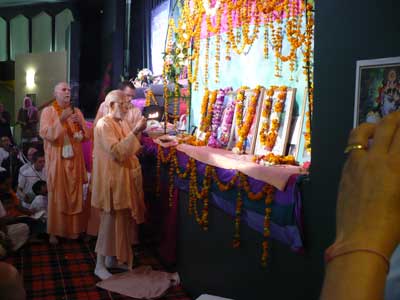 February 7th was Srila Maharaja’s 87th Birthday. The celebration of this divine event, called Vyasa-puja (the day Sri Guru performs worship of his Guru and guru-parampara and Srila Vyasadeva, and Radha and Krsna), began in the morning, at about 6.30 am with bhajanas. After that there was glorification of Srila Maharaja’s life and character, and bhajanas again began at 9.30 am.

Srila Maharaja arrived around 10am, at which time he offered arati to his Gurudeva, his guru-parampara, Srila Vyasadeva, the sampradaya acaryas, and Sri Sri Radha-Krsna. After that, the 400 plus devotees present offered arati to him. Then, after his short discourse on the meaning of Sri Vyasa-puja, each devotee, one after another, was able to approach him on the vyasasana and offer him flowers, which symbolized their hearts. 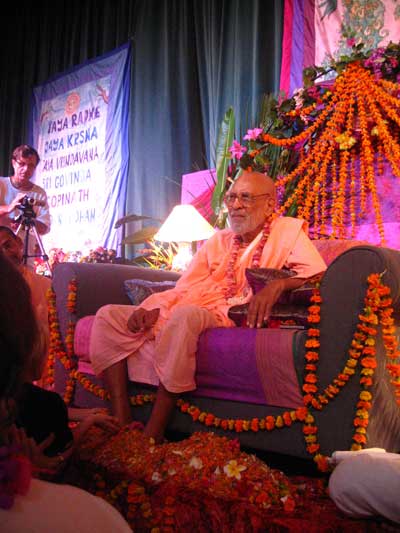 Everyone again met in the evening, for bhajanas and class. Srila Maharaja spoke about guru-tattva and Vyasa-puja, and called on his followers to do the same. The following is a transcription of Srila Maharaja’s evening Vyasa-puja discourse:

“The duty of a guru is that on his birthday, he should worship his guru and the guru-parampara, up to Krsna. In the Vedic scriptures it has been written:

["Only unto those great souls who have implicit faith in both the Lord and the spiritual master are all the imports of Vedic knowledge automatically revealed." (Svetasvatara Upanisad)]

We must certainly serve Krsna, but as much as we are worshipping Krsna, we should worship Gurudeva – not less than Krsna and even better than we worship Him – and then Krsna will be happy. If you do so, all the transcendental truths of the Vedas, Upanisads, and Puranas will manifest in your heart. All scriptures glorify Sri Gurudeva.

There is no happiness in this material world; whatever happiness comes is just another form of suffering and unhappiness. When we find a bona fide Guru – who knows all the purports of all the Vedic scriptures, who can therefore remove the doubts of his disciples, who has realized the Supreme Absolute Truth Sri Krsna, and who is detached from worldly desires – we should go to that qualified Guru, give our hearts to him, and fully surrender to him. He will then tell us how we can be happy. Without serving Krsna, we cannot be happy. First worship Guru and Vaisnavas, and then Krsna will be pleased and happy.

On the Birthday of Gurudeva, if his disciples are worshipping him only by ghee-lamps, incense, garlands, or money, Gurudeva will not be satisfied and happy. The disciples should try to know what Guru wants and how he will be pleased. Srila Rupa Gosvami pleased his Guru, Sri Caitanya Mahaprabhu:

[When will Sri Rupa Gosvami give me the shelter of his lotus feet? He understood the innermost desire of Sri Caitanya Mahaprabhu and established His mission in this world.” (Sri Prema-bhakti-candrika, Srila Narottama dasa Thakura)]

What does Gurudeva desire? A sincere disciple will know his desire and can fulfill it. That is the best puspanjali (offering of flowers) at the lotus feet of Gurudeva. If a disciple only offers flowers, money, garlands and other paraphernalia, Guru cannot be happy. Qualified Gurus do not simply want that their disciples personally serve them by massage and other such activities. The disciple should perform bhajana of Krsna, sincerely engaging in sravanam (hearing Sri Krsna’s name and fame), kirtanam (chanting His name and glories) visnu smaranam (and remembering and meditating on Him).

[“One should associate with devotees, chant the holy name of the Lord, hear Srimad-Bhagavatam, reside at Mathura and worship the Deity with faith and veneration.” (Caitanya-caritamrta, Madhya-lila, 22.58)]

He wants that you should be detached from worldly desires and sense gratification, and that before your death you will realize who you are and what is your duty. Your duty is to serve Hari, Guru, and Vaisnavas. You must fix your aim and object of your life; then, very soon, Krsna-bhakti will manifest in your heart.

It is stated in Sri Caitanya-caritamrta:

[“One should know the instructing spiritual master to be the Personality of Krsna. Lord Krsna manifests Himself as the Supersoul and as the greatest devotee of the Lord.” (Adi-lila, 1.47)]

Guru is a manifestation of the form of Sri Krsna. All the scriptures say that he is like Krsna.

[“All the scriptures proclaim Sri Gurudeva is saksat hari, the direct potency of Sri Hari, and is thus considered by saintly authorities to be His non-different representative. Because Sri Gurudeva is so dear to the Lord, being His confidential servitor (acintya-bhedabheda-prakasa-vigraha, the inconceivable different and non-different worshipable manifestation of the Lord), I offer prayers unto his lotus feet.” (Gurvastakam 7)]

[“O my dear brother, my foolish mind! Taking hold of your feet, I humbly pray to you with sweet words. Please give up all pride and quickly develop sublime and incessant rati for Sri Gurudeva, Sri Vraja-dhama, the residents of Vraja, the Vaisnavas, the brahmanas, your diksa-mantras, the holy names of the Supreme Lord, and the shelter of Kisora-Kisori, Sri Sri Radha-Krsna, the eternally youthful divine couple of Vraja.” (Sri Manah Siksa, Verse 1)]

[“I offer pranamas to the lotus feet of Sri Gurudeva (who includes sri diksa-guru and bhajana-siksa-guru), guru-varga (our entire disciplic succession) and all other Vaisnavas, to Sri Rupa Gosvami, his elder brother Sri Sanatana Gosvami, Sri Raghunatha Dasa Gosvami, Jiva Gosvami and their associates, to Sri Advaita Prabhu, Sri Nityananda Prabhu, Sri Krsna Caitanya Mahaprabhu and His associates, and to the lotus feet of Sri Radha and Krsna accompanied by Sri Lalita and Visakha and all the other sakhis.” (Sri Caitanya-caritamrta Antya-lila 2.1)]

Only hearing from diksa-guru will not be complete. We should serve and hear from siksa-gurus as well. It may be that there is something confidential that a Guru cannot tell and a disciple cannot ask. But he may be able to ask anything freely to a siksa-guru, and the siksa-guru will freely reply.

Sometimes the siksa-guru may be more than the diksa-guru. If we consider that Srila Rupa Gosvami or Krsna is our siksa-guru, then we can understand that they are superior to our diksa-guru. Still, before worshipping such siksa-gurus, first we must worship our diksa Gurudeva.

Krsna has given us free will, and this free will is very precious. We should give our precious free will to the lotus feet of Sri Guru, and we should tell him, “Oh Gurudeva, you are my only savior. I have unconditionally surrendered my body and everything I possess unto your lotus feet. Please give me Krsna-prema – one drop of Krsna-prema.” This is what a pure disciple wants.

Our Guru Maharaja realized the glories of Guru. After taking diksa from Srila Prabhupada Bhaktisiddhanta Sarasvati Thakura, he never could say “Prabhupada”; when he did, he began to weep loudly. He wanted to glorify him, but his mood became so high that he couldn’t. He used to say, “Krsna came to this world, but He didn’t save me. Sri Caitanya Mahaprabhu and Nityananda Prabhu also came here, and They saw me here. Narada and others were here, but they also did not save me. My Gurudeva, Srila Bhaktisiddhanta Sarasvati Thakura, took my sikha and dragged me from the well of hell. He took me under his shelter and gave me Krsna.”

I think I have also realized this. My birth was in Bihar, where there was an influence of Buddhism, and that place was quite nastika (atheistic) and full of the theory of sunyavad (voidism). Jarasandha, the father-in law of Kamsa, the enemy of Krsna and the Pandavas was from there – I was born in that very country. Srila Prabhupada was present in this world, and Srila Bhaktivinoda Thakura was in Mayapura, they did not save me.

My Gurudeva took hold of my sikha [the tuft of hair at the back of the disciple’s head, which he does not shave when he monthly shaves the rest of his head]. He dragged me to Navadvipa and induced me to imbibe Krsna-tattva. Now, by his mercy, although I am not very learned, I know the main object of our life. And that is what I am teaching to you – to become Radha-dasi, a maidservant of Srimati Radhika. This is the topmost goal.

Who gave me this knowledge, which I am preaching throughout the world? And, why are so many persons from around the world listening to me with honor? I was an ordinary person, but Gurudeva invested me with all established truths so that I would be able to preach his mission. I am realizing the glory of Gurudeva. You should also try to realize the glories of Gurudeva, and try to give up your independence at his lotus feet.