How to See Death 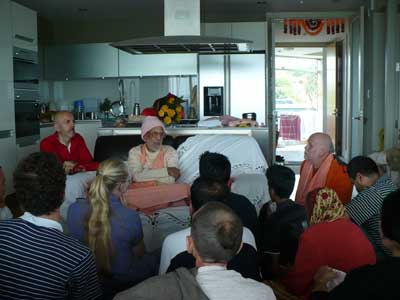 [Srila Narayan Gosvami Maharaja (to a terminally ill devotee:] Don’t fear death. Death simply means that you will have a new body, and by that new body you will be able to serve Krsna and perform bhajana with great determination. Because of your activities until now – your chanting of the holy name – Krsna will arrange to give you a pure devotee with whom to associate. We should not fear death. Death is nothing. As long as you are conscious, always remember Krsna and chant Hare Krsna.

Those who are now babies and those who are now very smart and strong youths will become old one day. No doctor or scientist, nor the combined effort of many doctors or scientists, can stop one’s old age. In old age we will be harassed by so many diseases, and one day we will have to give up this body. No one can postpone his time of inevitable death for even a second.

What is death? The soul, which is part and parcel of Krsna, gives up this body and enters into another baby body. This is death.

We are not this body; inside the body there is a soul, the eternal servant of Krsna. Now we souls have forgotten Krsna, and that is why we are covered by so many stages – birth, death, calamities, diseases, and problems.

Conversely, if we chant Krsna’s name, we will attain love for Krsna and be liberated from this world. There will be no birth or death, and we will take a very young and smart teenage body. We will always serve Krsna, and be happy. In Krsna’s abode, there is no need of serving anyone else but Krsna, no need of money, and no need of eating, as we have here. There is only nectar there – we only drink nectar.

[Bhadra dasi:] Srila Gurudeva, this is Ann. She has been chanting Hare Krsna for twenty-five years. Two years ago, her husband left his body. She has been missing him and grieving about this. She is a very good devotee, but she has no guru.

If he was your husband, why did he leave you? And what did you do with his body after his death?

[Srila Narayan Gosvami Maharaja:] Ashes. If he was your husband, why did you put his body in fire? Why?

So you should not lament. Krsna is your only husband. He never dies, and you, the soul, never die. Do not weep or lament in vain. Weep for Krsna.

[Srila Narayan Gosvami Maharaja:] Always be happy that your husband will not die. Always know that Krsna is your husband. He is always playing on His flute and calling you.

[Madhu-pandita dasa:] Srila Gurudeva, I would like to introduce Vasudeva Prabhu. He has been chanting for twenty-two years and would like to give his heart to you. This is his daughter Mina, his wife Amara, and his other daughter Nadia. He was formerly initiated by Bhavananda.

[Srila Narayan Gosvami Maharaja:] I will help you; I must help you. You should try to forget Bhavananda. I knew him from the beginning. He was never a devotee. He used to cheat, but in the end he was cheated and now he is living in vain.

Try to take new harinama and diksa initiation. It has been told in sastra, in our sacred books, that if one’s guru is fallen, one must accept another guru – a qualified guru.

Every day we perform some worship, and we must begin any devotional activity by praying to guru and offering him obeisances. Also, we must first offer obeisances to guru before chanting the holy name. If you have no guru, who will you offer obeisances to? You can attend our initiation very soon, and thus advance in Krsna consciousness.

[Hari-priya dasi:] What is the best thing I can do to help my brother (who is dying)?

[Srila Narayan Gosvami Maharaja:] You should pray to Krsna, chant Krsna’s name, and remember Giriraja Govardhana. Pray to Giriraja – that he will give your brother Krsna-bhakti, and that your brother can easily give up his body without any pain.

[Bhadra dasi:] This is Yasmin. She just met the devotees yesterday. She is already interested in initiation, but she doesn’t really know what it means.

[Srila Narayan Gosvami Maharaja:] An expert professor or teacher gives lessons to his students regarding the process of studying a particular subject. A bona fide guru, by diksa (initiation), gives transcendental knowledge and a relationship between our soul and Krsna. By diksa, all your sins and all kinds of unwanted thoughts and habits will go away. Then, by this diksa system, gradually you will realize your relationship with Krsna. Do you know the meaning of ‘relation’? Is your father alive?

[Srila Narayan Gosvami Maharaja:] What is your relationship with your father? He is your father. If you are sick, will your father help you or not?

[Srila Narayan Gosvami Maharaja:] If you are married and have a son, you can spend all your money and give your whole being for that son. This is relation. When you realize your relationship with Krsna, you will give up everything for Him, and He will give all His mercy to you.

This is the diksa process. Diksa is not completed in one second; it takes time. By taking diksa, we are entering into the school in which we learn all these principles and philosophical truths.

[Madhu-pandita dasa:] Srila Gurudeva, I would like to introduce Bhakta Peter from Christchurch. He has been chanting for eighteen years. He would like to give his heart to you.

[Srila Narayan Gosvami Maharaja:] I will be happy to take your heart.

[Srila Narayan Gosvami Maharaja:] You have already given your heart, or you will give it?

[Srila Narayan Gosvami Maharaja:] Oh, don’t say this. Say, “I have just now given my heart to you – for you to keep forever.” If you say “will,” then giving it is very far away. Tomorrow you may come for initiation.

[Madhu-pandita dasa:] Peter studied religious studies in a university. But he became discouraged by the teachers teaching Mayavada (impersonalist) philosophy, and so he did not complete his Ph.D.

[Srila Narayan Gosvami Maharaja:] Mayavada means ‘influenced by a special power of Krsna called maya.’ By that influence you will think, “I am God, the creator of the entire world, who has no form or qualities.” This is mayavada philosophy.

We are not the Supreme Lord. We are always suffering from the problems of birth and death, and we are always weeping due to so many problems. We are not God. God has no problems. You are fortunate to have given up that line of thought.

[Peter:] I read a very interesting book that you published called Going Beyond Nirvana.

[Srila Narayan Gosvami Maharaja:] You have read it? You are very lucky. This will help you.