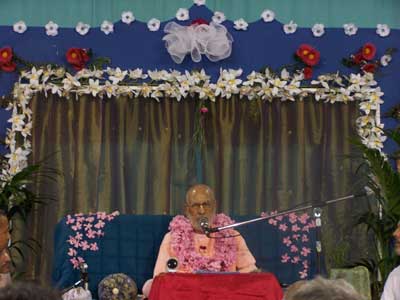 The European Harikatha Festival 2008 with Srila Bhaktivedanta Narayana Gosvami Maharaja was held at Collegio S. Maria, in a beautiful town on Lake Maggorie named Verbania. Over one thousand devotees and guests attended from around the world, most of who stayed at the hotel and camped on the grounds where the festival took place.

Due to having had a very hectic touring schedule over the previous few months, and therefore subsequent health requirements, Srila Narayana Maharaja was delayed in leaving San Francisco, California en route to Europe. Thus, after throwing the devotees in Italy in a whirlpool of separation feelings, instead of arriving on the 23rd of June he arrived on the 27th. In the meantime, starting from the first day of the festival, the sannyasis and other senior devotees gave classes throughout the days and evenings as his messengers. 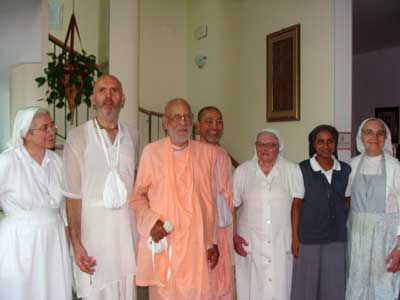 Once Srila Maharaja arrived, he and his party stayed up the street from the festival site, at the Casa Nazareth run by nuns. 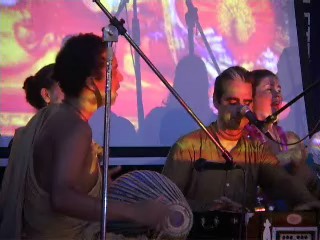 On the evening of June 23rd, a concert with Kisori-mohan dasa, Sudevi dasi, Gopal dasa, Rasa-lila dasi, and Purandaracarya dasa was arranged at a concert theater by the festival organizers, Lila-purusottama dasa and Krsna-devi dasi. Over one hundred guests and over one hundred devotees sat in the audience, listening to and enjoying the bhajanas. The mood of the devotees was very prayerful due to their strong feelings of separation from their Gurudeva. They chanted deeply, to bring him to Italy as soon as possible.

Meanwhile, on June 24th, in his quarters in San Francisco, Srila Maharaja gave a twenty-minute class on the book “Prema-Vivarta”, with a special personal message for the devotees waiting for him in Italy. This class was recorded by his secretary Sripad Brajanath dasa, who sent it via internet to the devotees in Italy to hear. Then, that evening, listening with rapt attention to the nectarean and intimate pastimes of Sri Caitanya Mahaprabhu and His beloved associates, the devotees in Italy bathed in Srila Maharaja’s simultaneous presence and absence from them.

On July 27th, on the morning of Srila Maharaja’s arrival, still more feelings of simultaneous separation and anticipation overwhelmed the devotees during their ‘welcome kirtana’, as they waited outside the Temple Hall for Srila Maharaja. At that time they were further baffled when, instead of driving up to the hotel, his car went directly to his new residence. 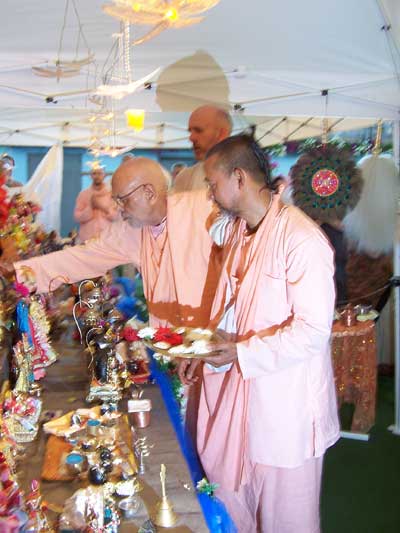 Finally, on the evening of the 27th, Srila Maharaja arrived in the Temple Hall, in the midst of the over one thousand devotees performing an excited, heartfelt kirtana. Then, instead of immediately sitting on his vyasasana as he usually does at festivals, he remained standing in front of the vyasasana for several minutes. As he stood, he was glancing at the thrilled devotees in his audience, accepting their love and showering his unlimited love upon them. Then, as the kirtana became still more and more moving, he inspired them with the understanding that he had actually been with them all along, blessing them throughout the week.

Before Srila Maharaja’s discourse, the devotees performed guru-puja arati and a foot-bathing ceremony. Then after offering his obeisances to his diksa- and siksa gurus, Srila Bhakti Prajnana Kesava Gosvami Maharaja and Srila Prabhupada Bhaktivedanta Svami Maharaja, he began his discourse.

He told his audience, “Why have I come here in this old age? Even though the doctors have prohibited me, telling me not to travel so much, I have come. Our predecessor guru, Sri Narada Gosvami, used to go door-to-door because he was so merciful. Sri Caitanya Mahaprabhu went everywhere in India – East, West, North, and South – even without shoes or other comforts. Why? Due to His mercy.

“I have come to remind you all that we are not this physical body. We are soul, part and parcel of the Supreme Lord Krsna. We are eternal servants of Krsna, but we have all forgotten this. That is why, from the beginning of creation, we have been suffering the pain of endless births and deaths. Old age is coming.

“This is not the first time that you have come in the human form. Sometimes you were demigods, sometimes you were very poor, and sometimes very wealthy. You have been in so many species of life, like those of birds, and animals like donkeys, monkeys, pigs, and dogs. Krsna is so merciful that He has now given you this human form. You must know that you are eternal.

“In this regard, I remember a story:

“A brahmana in Kasi, Varanasi, once prayed to Lord Siva, ‘I want to give my daughter in marriage, but I have no money. Please give me money.” Lord Siva told him, “Go to Vrndavana and meet with Srila Sanatana Gosvami. You can ask him to give you some wealth for your daughter’s marriage.’

“The brahmana went to Vrndavana, by foot, and there he asked the villagers for the whereabouts of a person named Sanatana Gosvami. As they all knew him, they pointed out his residence.

“Srila Sanatana Gosvami was practicing bhajana near the Yamuna River at Kaliya-hrada, the former abode of the very poisonous snake named Kaliya. Kaliya-hrada was close to the Yamuna, and therefore its surrounding area was full of sand.

Srila Sanatana Gosvami wore only a loincloth. He used to go begging door-to-door for a small amount of prasada (Krsna’s food remnants), and would take as his meal only one dry chapatti (flat bread) with no salt.

“The brahmana arrived at his cottage and told him, ‘I went to Sankara Mahadeva, Lord Siva, and he told me to meet you. He said you will give me some wealth for my daughter’s marriage.’

“Sanatana Gosvami replied, ‘I have no possessions. You can see that I have nothing but a loincloth.’ Then he thought, ‘Oh, Siva cannot tell a lie. He is my bosom friend.’ Thinking of Lord Siva and contemplating further, he remembered a touchstone he had once discarded and then forgotten. Now he told the brahmana, ‘Go to the Yamuna and remove some of the sand, and there you will find a touchstone. It is somewhere in the sand, though I don’t remember where.’

“The brahmana found the jewel (touchstone), touched it to iron, and the iron turned into gold. He was very, very happy that Lord Siva had told him to come to Vrndavana, and thought with gratitude, ‘My prayer has been answered.’

“On the way home, however, his greed for money increased and he began thinking, ‘Why did Sanatana Gosvami keep the touchstone in the sand? It had no use there. He must have still more valuable jewels.’ He thus returned.

“Sanatana Gosvami asked him, ‘Why have you come back?’

“He replied, ‘I’ve come because I know that you have more valuable jewels than this.’

“Sanatana Gosvami said, ‘Do you really want that? Then go and throw the touchstone in the Yamuna.’

The brahmana did so with all his power, and then Sanatana Gosvami told him, ‘Come here. Come here.’ Sanatana Gosvami gave him the mantra: ‘Hare Krsna Hare Krsna Krsna Krsna Hare Hare, Hare Rama Hare Rama Rama Rama Hare Hare’ and said, ‘I do not have worldly jewels, but I have transcendental jewels. Billions of jewels are not equal to what I am giving you now. The jewel of Lord Krsna and Sri Radha will come to you in a very short time. So remain here. Your daughter’s marriage will take place automatically. Stay here and chant Hare Krsna.’

“That brahmana followed his instruction and became a very elevated saint.”

“What is the meaning of this story? You should hear this very deeply. We always neglect harinama – chanting and remembering Krsna. We don’t know the cost of this jewel. Its value is described in the scriptures, but we don’t believe their words. We always give importance to money-making. If money is coming, we will give up chanting and say, “Oh, tomorrow I will chant.” Why is this? 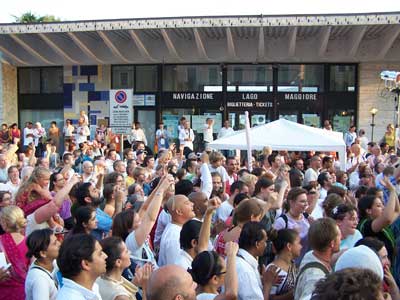 “You have been with me for so many years and hearing the glories of the holy name, so why are all these worldly desires coming? I have come to remind you of the value of chanting harinama and remembering Krsna. In that way your life will be successful. You must know that your wife, your children, and your money will not help you at the time of death. You will leave empty-handed. We should know the glory and value of harinama and bhakti. Don’t be attached to worldly intoxications. Don’t be weak. 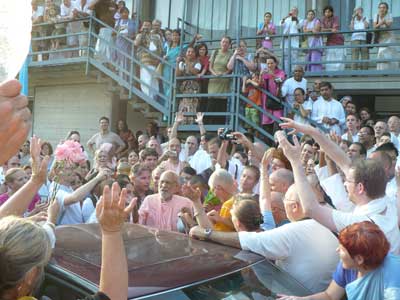 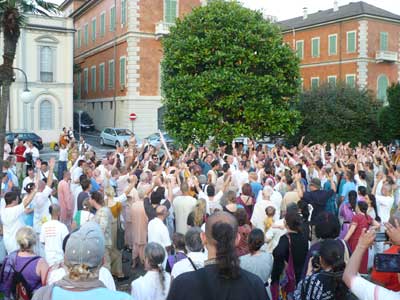 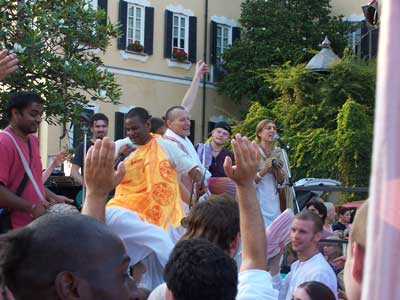 After Srila Narayana Maharaja’s evening class on Saturday, June 29th, the devotees performed nagara sankirtana (public chanting and dancing) through the center of the town of Verbania. During the sankirtana, the devotees’ procession came close to a stage where rock band musicians were doing their sound checks. At that time the rock musicians began spontaneously playing their instruments to follow the kirtana. The devotees, headed by Purandaracarya dasa, were then welcomed to the stage and started to make a mini concert with the rock band while hundreds of devotees chanted and danced with raised arms.

On the morning of June 29th, Srila Narayana Maharaja came to the Temple Hall for a darsana with all the devotees. At that time devotees from the various countries were able to ask questions. Here is one such question and answer:

[Rama-kanta dasa:] What is the best method for your devotees in Holland to preach and to bring one hundred devotees to you at Kartika?

[Srila Narayana Maharaja:] Do as I am doing. Follow me, and all those who are preaching on my behalf. Perform nagara-sankirtana (chanting in the streets, parks, and other public venues), give classes like the classes we are conducting here, go on book distribution, go from door-to-door and tell harikatha. This is the process.

My book-table is here. I am requesting all of you again and again to empty my book-table. Take books and distribute them to your friends and others – and also take my posters. We distributed all the books (and posters) from the book table in Badger. But alas, here the books are remaining on the table. I think that perhaps the devotees here are not qualified to take my books, and that is why they are not taking them all. I want to see that my table is empty. Today, I want to see this. Otherwise, I will think you are not pure devotees. I will think that you are not fulfilling my desires.

Special thanks to Krsna-devi dasi for answering questions about some of the details in this report.
Report written by: Vasanti dasi
Editor: Syamarani dasi
Proofreader: Krsna-kamini dasi
Pictures Courtesy of: Krsna-mayi dasi and Malati dasi