[Respected Readers,
Please accept our humble obeisances. All glories to Sri Sri Guru and Gauranga.
Please forgive us that we have not sent out any hari-katha or news in the past month of Kartika. We were hoping that because you were daily receiving Srila Narayana Gosvami Maharaja's live webcasts, this would suffice. We pray that you will forgive us and happily accept this report about the just-recently ended Vraja Mandala Parikrama festivities:]

The annual Vraja Mandala Parikrama under the guidance of Srila Bhaktivedanta Narayana Gosvami Maharaja began on October 14th in Vrndavana, at Sri Gopinath Bhavan. Over 1,000 devotees from all over India and around-the-world assembled for the parikrama celebrations. The devotees stayed in Vrndavana from October 14th through the 26th, at which time they went to Govardhana, where the parikrama party stayed until November 13th at Sri Giridhari Gaudiya Matha.

Srila Maharaja gave classes every morning and evening on the book Sri Madhurya-kadambini by Srila Visvanatha Cakravarti Thakura. The first week, he spoke in the mornings on Sri Damodarastakam, which was sung every morning and evening throughout the month, and each evening throughout the month, before his discussion on Madhurya-kadambini, he retold the pastimes of the holy places visited by the devotees during that day. 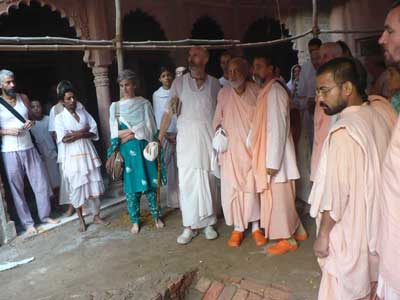 Each day, under the guidance of Srila Maharaja, the sannyasis led the devotees on parikrama to the famous temples and pastime places in Vrndavana. 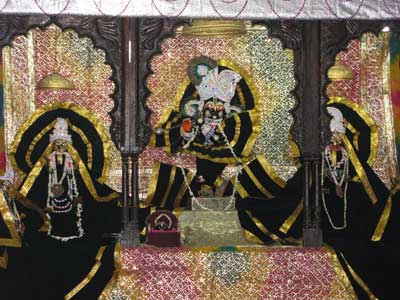 Sri Sri Radha-Gopinath - one of the 7 prominent temples in Vrndavana. 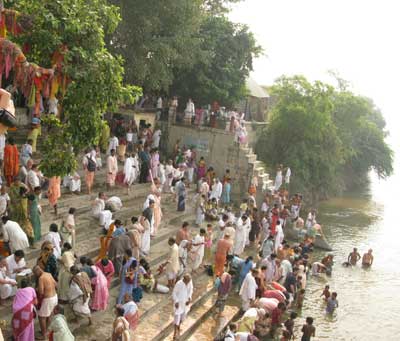 Brahmanda-ghat, where Sri Krsna ate earth while playing with his cowherd friends.

On October 26th, the parikrama party went by bus to Govardhana and before arriving at Sri Giridhari Gaudiya Matha, they stopped at Santanu-kunda, where Maharaja Santanu worshipped the Lord with a desire to have a son, and then by this worship begot Bhismadeva.

The devotees related pastimes of the birth of Bhismadeva, with reference to Sri Vraja-mandal Parikrama. Bhisma's mother was Ganga, who, for a particular reason, left Santanu Maharaja. The king then became attracted to Satyavati, who was called Matsyagandha or Matsyodari, and who possessed great beauty. She was living in the house of a fisherman across the Yamuna opposite Mathura. Maharaja Santanu desired to marry her, but the fisherman, Dasaraja, was unwilling to give the king his adopted daughter in marriage. He said, "If you accept the condition that the son born from my daughter will be the successor to our kingdom, then you can marry her." Maharaja Santanu refused this proposal for the sake of the crown prince Devavrata (Bhisma), yet his heart felt great sadness. When Prince Devavrata came to know of this, he went to the house of the fisherman and vowed to remain a life-long brahmacari. He promised that the child born from Matsyodari would ascend the throne. Thus, he was able to arrange for the fisherman's daughter to marry his father Maharaja Santanu. 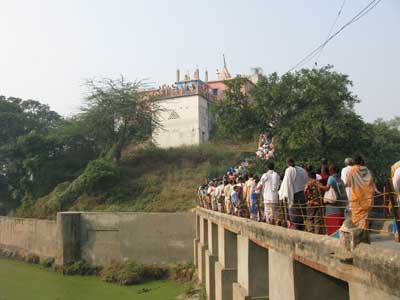 Devotees walking up to Santanu-kunda

On October 27th, the parikrama party circumambulated half of Govardhana, stopping at various pastime places along the way.

Srila Maharaja met the party at Surabhi Kunda, as he does every year. He had restored this beautiful holy kunda with the help of his disciple, doctor Dr. Sanjay from Mathura. 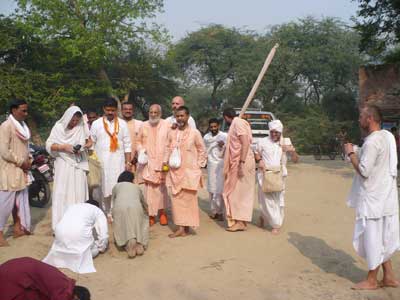 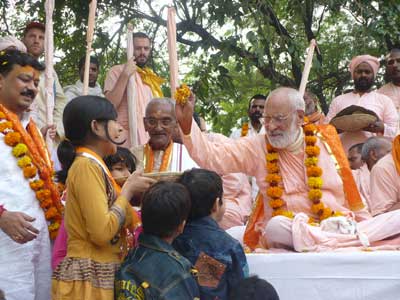 Blessing Dr. Sanjay and his family.

The Annakut festival was held on October 29th. After morning class, Srila Maharaja worshipped a cow, and the brahmanas and Vaisnavas. 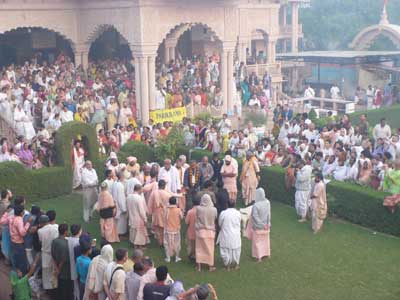 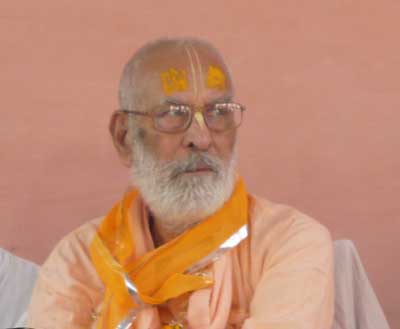 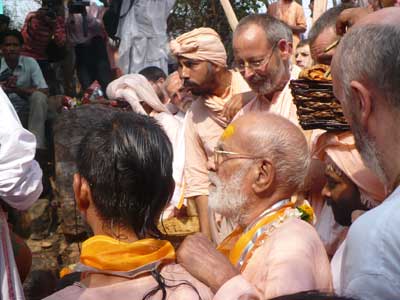 On the last morning of Kartika Srila Maharaja told his audience:

"By the special mercy of Giriraja Govardhana, Sri Sri Radha-vinoda-bihari and Sri Sri Guru and Gauranga, our Kartika month and Vraja-mandala parikrama is completed. We spent 10 days in Mathura visiting the holy places there, 12 days in Vrndavana, and then more than 2 weeks in Govardhana, visiting the nearby forests such as Kamyavana and Khadiravana.

"Once, Sri Narada Muni asked a benediction from Krsna that anyone who hears or describes the pastimes Sri Krsna performed as they are explained in the 10th Canto of Srimad-Bhagavatam, and hears them in the place where the pastimes were performed, would get the benediction of achieving prema-bhakti.

"We are hearing Sri Madhurya-kadambini, and learning how hard it is to achieve prema-bhakti. But by visiting these holy places, especially in this month of Kartika, and hearing hari-katha, we can get the result of performing all the limbs of bhakti.

"I pray on all of your behalf to Sri Giriraja Govardhana and Sri Caitanya Mahaprabhu that all the hari-katha you heard this month will awaken in your hearts.

"This month there must have been so many difficulties. We should understand this to be our austerity. There may have been mistakes committed by the devotees of the temple to the visitors. Please forgive them for any mistakes, and come next year. This year there were only 1,500 devotees. Next year, everyone should bring one more person so that there will be 3,000 devotees.

"We should carry everything we heard this month in our heart, and all come to Navadvipa for Gaura Purnima." 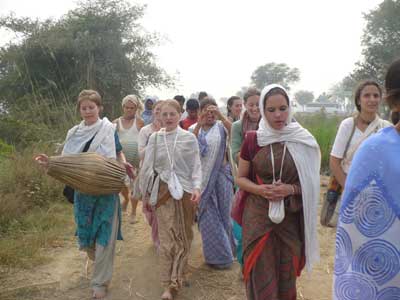