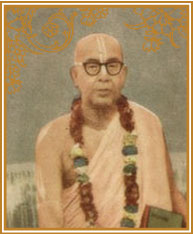 The Hindu Scriptures teach us, according to Sri Krishna Chaitanya, nine principle doctrines:

1.) Hari (the Almighty) is One without a second.
2.) He is full of infinite power.
3.) He is the ocean of Rasa (beauty and sweetness).
4.) The individual souls, the living beings, are His separated parts.
5.) Certain souls are engrossed in Maya, the illusory energy of the Lord.
6.) Certain other souls are released from the bondage of Maya.
7.) All spiritual and material phenomena are connected to the Lord but distinct from Him.
8.) Bhakti, or devotion to God, is the only means of attaining the final and highest objective of life, the attainment of spiritual existence.
9.) Prema, or holy love for Krishna, is alone the final and highest objective of life.

This Theistic vision is not attainable by the theories of mundane science. It is, however, not opposed to a truly rational conclusion or understanding. It satisfies, fully, the needs of our real moral sense. It floods our life with peace, joy and hope, freeing us from all evils and solving the mystery of pain, vice and death.

There can be no real intellectual assent to the truths of Theism without giving our whole higher selves to God in the fullest trust, love and obedience. Then only are we really convinced, when we actually realise the imperative necessity for ourselves and for all animation of attaining the spiritual service of Krishna, who is all-love. The process of Bhakti (devotion) then is no longer a mundane theory or a set of mundane propositions but instead something that brings about the complete dedication of all we do and think and say to the constant service of Transcendence.

We should begin to allot some time and energy to learn of the Absolute Truth, revealed by the scriptures through the living scripture, by which I mean the sadhu (saintly devotee of God). The more we practice associating with saints, the more we can detect our hallucinations in our current conceptions of God; and our faith will rise higher and higher till it reaches the Divine Holy Feet of Krishna.

When this faith in Krishna is kindled in the doubting heart and we really seek to be enlightened in perfect humility, Krishna sends to us a good preceptor to guide us in the path of the Absolute. I am engaged today in carrying out the precepts of my Divine Master, Sri Bhakti Siddhanta Saraswati Thakur. I am trying in my humble way to explain religion as I have heard from his holy lips. Hearing about true religion is the one needful thing for both the theists and the atheists.

Religion means the spiritual process by which our souls are re-united to the Absolute Lord by the bond of his eternal willing service, which is the proper function of each individual soul. Religion establishes our relationship with God. It provides a means to go deeper into the profundity of the Divine. And it leads to our attaining holy love – the supreme purpose of spritual pursuits. Religion is harmonious and universal. God is one without a second, and His religion also is one for humanity as a whole, though exoterically or morphologically it may vary in certain external circumstances. The esoterical or morphological aspect of all true religion is one and the same, viz., Divine Love. And that religion which warrants the highest loving devotion to God is the best of all and should be followed by all intelligent human beings.

Philosophically, our eternal self is something other than the physical body made of earth, water, fire, air and ether, and the subtle body made of mind, intelligence and perverted ego. The soul is a spiritual entity quite distinct from the physical body and the astral body made of matter – either in gross or subtle forms. The soul is the proprietor of these two properties, the gross and subtle bodies, which are perishable. The soul is neither born nor does it die. The soul has everlasting existence. It is exempt from liability to extinction. Under the influence of Maya, the illusory energy of God, which manifests itself in the shape of this mundane world, the soul is again and again vested with a corporeal frame and each conditioned soul passes after death into a series of new existences in heaven and hell or in the bodies of men, beasts, birds, insects, or plants on earth, where it is rewarded or punished for all the deeds committed in a former life. The soul may soar so high as to become a divine being fully conscious of his own true nature as an eternal servant of the Supreme Lord in the spiritual kingdom, or it may descend so low as to appear no better than sticks and stones.

The destiny of each individual soul is thus made or marred by himselft. As spiritual beings, all individual souls possess the faculty of free will divinely bestowed upon them. They can abuse this gift of God or they can make the best use of it. The Supreme Lord does not interfere with His gift, viz., the soul’s freedom of choice.

All individual souls though intrinsically of the same nature with God are but infinitessimal Absolutes when compared with the Infinite Absolute Personality and are therefore servants of God.

Just as the rays of the sun are always associated with the sun, so also, as associated parts of the Absolute-Sun, all individual souls are expected to exist with the Eternal Existent Lord, to know the Omniscient Lord and to enjoy Infinite Bliss by eternally rendering loving service to Him. But, for the transgression of deviation away from Him through misuse of their free will, the external potency of God, Maya, suppresses them by way of showing a diversity of existence, in the same way as rays of sunlight streaming away from the sun get their normal aspect of brightness diminished and suppressed when they are reflecting upon dark material things.

The natural function of rendering eternal service to God which is common to all souls lies hidden under the cover of manifold miseries when they want to lord it over the universe instead of serving the Supreme Lord.

To explain further, just as the luminous substance of the sun appears as 1) the solar disk, 2) the individual rays, and 3) the reflection; so also the inconceivable power of the Absolute-Sun manifests Himself in three ways: 1) the Internal Potency; 2) the Intermediate Potency, and 3) the External Potency. The Intermediate Potency resolves into individual souls like us, which correspond to the individual rays of sunlight. The External Potency or Maya corresponds to the reflection (as when light reflects upon the surface of the sea). And the Internal Potency corresponds to the solar disk, the Spiritual Sun itself – the kingdom of God. The orb of the sun contains the individual rays, yet the rays are found to be scattered away from the sun; similarly the individual souls, though ultimately contained within the same Reservoir of Light (God) are scattered away by reason of their being averse to the service of God from beginningless time.

Religion seeks to reestablish our relationship with our eternal Lord, and our living service to Him, by attaining Divine Love, which is the panacea for all evils in this world.

From the book Spiritual Successors of the Six Gosvamis, by Muralidhar das.