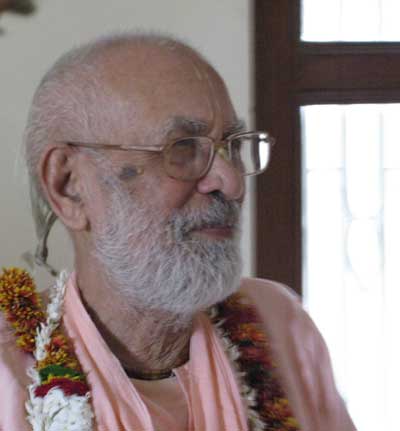 In this beautiful and moving discourse, Srila Narayana Gosvami Maharaja is encouraging us to be merciful - to give our hearts in helping others come to bhakti.]

There is not only one world - there are millions upon millions of worlds. Within all these worlds, the eternal spirit soul wanders through the various species of life, sometimes taking the form of a man, sometimes a tree, and sometimes a creeper or an animal. In the course of his wandering, if one is fortunate, he receives the association of pure devotees, otherwise not. What is that luck, or fortune? If one has performed any activities related to Krsna and His associates, or related to anyone or anything connected with Krsna - such as Tulasi, His temples, His land (Vrndavana-dhama, Navadvipa-dhama or Puri-dhama), he becomes fortunate.

Here is an example of how one becomes fortunate: There was a Vaisnava saint who used to go door-to-door, begging for some chapatis, rice, or any other foodstuffs. He always used to call out, "Hare Krsna Hare Krsna Krsna Krsna Hare Hare, Hare Rama Hare Rama Rama Rama Hare Hare," and sometimes "Radhe Syama, Radhe Syama!" or "Radhe Radhe, Radhe Radhe!" throughout Vrndavana, in Vraja-mandala. He was simply absorbed in "Radhe Radhe Radhe!"

One day he went to a door of an old lady who was in a very angry mood. She didn't want to hear "Radhe Radhe" or "Hare Krsna," and she rebuked him, saying, "Don't you ever come to my door in the future, otherwise I will break this stick on your back! Always remember this! Don't come to my door!" The Vaisnava returned the next day at the same time, calling out again and again, "Radhe Syama!" "Radhe, Radhe!" and "Hare Krsna Hare Krsna Krsna Krsna Hare Hare, Hare Rama Hare Rama Rama Rama Hare Hare."

That lady became very furious and began to rebuke him again. He left, but he returned again on the third day. The lady thought, "Why he is coming, I do not know. He must be coming just because he wants to eat something!"

At that time she was cleaning her room with cow-dung mixed with water. She told the Vaisnava, "You came again? Oh!" She took the moldy worn-and-torn cloth full with the cow-dung and water, and threw it at him. He gladly took the cloth and went to the Yamuna River, where he washed the clay off it and rinsed it until it became soft, clean, and smooth. Then, after it dried, he tore it into small pieces and dipped those pieces into ghee that someone else had given him. Now he had many small ghee wicks, which he used to offer arati (worship ceremony) to his Deity.

This is an example of sukriti [a spiritual pious activity, performed knowingly or unknowingly, which creates spiritual impressions on the heart of the performer and gradually qualifies him to do bhakti.] She had ‘given something' to that saint, and he used it in the service of Krsna.

Whoever helps or serves pure devotees, either knowingly or unknowingly, is spiritually benefited. If one circumambulates Vrndavana or Navadvipa dhama, offers obeisances to any Deity, hears any devotee chanting, "Hare Krsna Hare Krsna, Krsna Krsna Hare Hare," gives some water to Tulasi or circumambulates her, or help any pure devotee in any way, that person will be greatly benefited.

Who is a pure devotee? A pure devotee never thinks himself to be the enjoyer of anything in this world, for he knows that Krsna is the enjoyer. Everything he does is to please Krsna. If anyone gives him a farthing, he will give it to his Gurudeva or Krsna; he will never enjoy it for himself. This is a pure devotee.

Those who are begging and filling their own pockets, giving only a small percent to Gurudeva and keeping and enjoying the rest for himself, or keeping the donations in a bank account and thinking, "Afterwards I will enjoy," what will become of them? They are not true devotees. At once they are fallen, and they will become more fallen. Everyone will realize that they are not really Vaisnavas.

If you are helping and serving the pure Vaisnava, or doing parikrama of Vrndavana or a Tulasi plant, even unknowingly, or you have taken any maha-prasadam remnants which devotees are distributing somewhere and which has been sincerely offered to Krsna with tulasi leaves - that will surely have a great effect. This is called sukriti, pious credits that create impressions on the heart for the gradual attainment of bhakti. When much sukriti is amassed by someone, that person attains sadhu-sanga.

["The verdict of all revealed scriptures is that by even a moment's association with a pure devotee, one can attain all success. Caitanya-caritamrta, Madhya-lila, 22.54)]