Everything is meant only for Krsna Consciousness 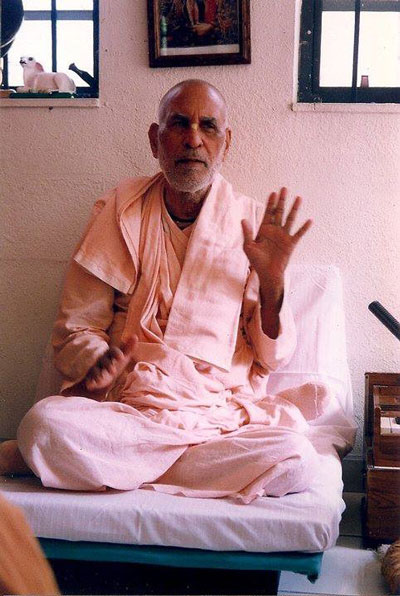 Tungavidya dasi: Gurudeva, You're always telling one-pointed katha. You say that we should only have the desire to attain manjari-bhava. You say we should not even desire to attain the moods of sakhya (Krsna's cowherd friends), vatsalya (His parents), and sakhi (His beloveds) bhavas, but to instead to only offer pranama to those moods.

Srila Narayana Gosvami Maharaja: We offer pranama to a mayavadi (impersonalist) also. Why?

Tungavidya dasi: Because Krsna and Radha are in the hearts of mayavadis as well?

Srila Narayana Gosvami Maharaja: No, no, no. We offer pranams to a certain mayavadi, because he acts as a fence to keep unqualified people from coming to krsna-bhakti. If such unqualified, ill-motivated persons come they would want to disturb Krsna and His devotees. Sankaracarya has done this, so we also offer pranama to him.

Tunga-vidya dasi: So right from the beginning, whoever comes to you is very fortunate to hear such one-pointed katha. You said before that when a qualified guru accepts a disciple, that jiva soul is actually like a flower that gurudeva offers to the feet of Kisoriji (Srimati Radhika) in Vraja.

My question is this: After having once been offered as a flower to Radhika's feet, surrendering oneself and one's life to gurudeva, and putting all one's faith in guru and Radhika alone, if that same person later starts putting their faith in palmistry, astrology, numerology, and other occult things like the stars and the devas (demigods), how does Kisoriji feel about that?

Srila Narayana Gosvami Maharaja: Tungavidya-sakhi and Citra-sakhi know all the sixty-four arts. They are extremely qualified astrologers – knowing when and how Krsna will come. They can instruct the parrots: "Take this letter and give it only to Srimati Radhika." Those parrots can fly to Candravali's groves and see what Candravali and Krsna are doing there, and then go and tell Radhika. These sakhis know what the birds are saying. We have no knowledge of the languages of the trees, creepers, and animals, as they do. They use all this for Krsna's service.

Anyone can use astrology, as well as any other science or art, if he is a bona fide Vaisnava, a pure devotee of Krsna like the gopis. These associates of Krsna know how to paint, how to make attractive tilaka decorations for Radhika and Krsna, how to decorate the feet of Srimati Radhika, and so on. No one is like them. All branches of knowledge are meant for serving Krsna and Radhika, but unfortunately we are not using these for their service. We use them in our personal sense gratification.

Here, Madhavi knows how to play the piano. Yesterday I told her to sing for me, and she sang beautifully. Similarly, if you know any instrument, you can play it in the service of guru and Krsna.

Even tricks, even cheating others, can be used in the service of guru and Krsna. Such tricks are used in the pastimes of Krsna and the gopis. 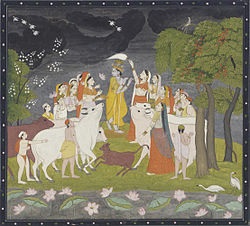 The gopis once gave their golden bangles to a person who knew the art of controlling a serpent by mantras, and he taught that art to them. Citra, for example, knows all mantras. At night, when she goes with Radhika to meet Krsna, she controls all the serpents, ghosts, and wild beasts. We need to ensure that we do not use such skills for our sense gratification. They must be used purely for service.

As far as taking money from general persons is concerned, this is also an art that not everyone can do. If by that art we can collect a great deal of money for Krsna's satisfaction, it is good. Otherwise, if we collect even one farthing – one pence – and use it for ourselves, this is an offense and we will be nowhere. Everything is meant only for Krsna Consciousness. If everything is done in this way, it is so good.

Srila Bhaktivedanta Svami Maharaja collected many intellectual giants from all sections –expert in every skill and with every quality. He sent his scientific-minded disciples to scientists and told them, "Go to scientists and preach there." To disciples who were business persons, he would tell, "Manage this and that." Artists like Syamarani were ordered, "You should paint good paintings for Srimad-Bhagavatam and Bhagavad-gita to attract all general persons.

So, every quality can be used in the service of Krsna. If skills and talents are used in this way, that is very good; they must not be used for sense gratification. At the same time, let us also consider this fact: Srila Sanatana Gosvami had a touchstone. He never used it for himself, and in fact he never used it at all. He knew that it could not serve Krsna; only his heart could serve.

We should realize all these truths and try to develop our Krsna Consciousness. What we have we should use in the service of Krsna, and if anything is not for service, don't try it. Don't try it. Use only what you have. So many persons come to the Matha, but when they see that all are learned persons in sastra and Sanskrit, they also want to learn Sanskrit. But they consider, "We cannot learn so much here, so we should join a Sanskrit college." Thus, they leave the Matha and learn Sanskrit.