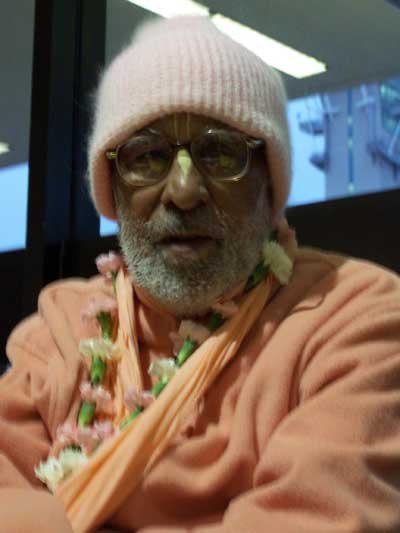 [Srila Narayana Gosvami Maharaja:] I will tell a story about this: There was once a king who had thousands of sons. Those sons were killed - burnt to ashes - as a result of committing a great offense to a sage. Thousands of years later, there was a good son born in that dynasty. He served Krsna, and he was therefore able to bring the Ganges from the Himalayas to the place where his ancestors had been burned to ashes. Although only a very little part of his ancestors´ bones remained and were touched by the Ganges, his ancestors were at once liberated and went to Vaikuntha.

Tulasi is not less powerful than the Ganges - she is more powerful. Whether your mother was alive or not, if Tulasi's leaves touched her body, she will be quickly liberated. She told you in your dream, "I am happy," so it is alright. You have done so much for her.

[[Devotee:]] It doesn´t matter whether she was alive or dead at that time?

[Srila Narayana Gosvami Maharaja:] Either way. The soul does not die. We have so many examples of this conclusion. Once, after a certain person died, he became a ghost. He was taken by the Vaisnavas, by mantra, within a bamboo stick, to a place where there was a recitation of Srimad-Bhagavatam for seven days. After seven days, he was liberated. Don't have any doubts in this regard.

Muslims do not utter the holy name Rama, but if they see a hog they say, "Harama, harama." Harama means abominable' [*See Endnote 1]. In the word harama' is the word Rama,' and first is ha', which in Sanskrit means oh', or alas'. Taking the spiritual meaning, this means, Oh Rama!' Krsna easily hears this and thinks, "He is calling Me: ``Ha Rama.`` Krsna will then come and liberate that person.

Even if someone has no belief, and he hears the holy name once in his entire life, that name will do its work.

[Srila Narayana Gosvami Maharaja:] Srimati Radhika sometimes rebukes Krsna as a friend would do. She may say to Him, "Oh, massage my feet," as friends might say to each other. Sometimes She may serve Krsna better than a mother would do. Sometimes She serves Him so much better than the best of servants (like Hanuman or others like him). And sometimes She serves as a beloved. No one can serve Krsna as She does; every mood is in Her - that is madhurya-rasa.

Sometimes Krsna and the gopis gamble; this is a type of play among friends. Sometimes the gopis clap to congratulate Srimati Radhika on Her victory. They call out, "Oh, Radhika has defeated Krsna!" At that time, Madhumangala and other cowherd-boys say, "Oh Krsna, let us leave now; otherwise You will have to become their servant, and then they will very quickly take Your flute and crown and everything else. So let us leave here right away" All relationships are in madhurya-rasa, and that is why it is best among all rasas.

If you do not pay' something for this, you cannot develop all these moods. Your heart is the daksina (donation given by the disciple at the time of receiving initiation). By giving your heart, you can realize these moods. If you have no faith, if you do not regularly hear hari-katha, and you are not paying daksina, these moods will not enter your heart.

[Question:] Do you think that it is a noble attempt to live separate from society and technology, and to be self-sufficient? We have our own land and everything is produced there...

[Srila Narayana Gosvami Maharaja:] We should make our entire environment conducive to bhakti. This is okay. We should create our environment so that we can chant and remember Krsna. We can take help from technology. If you are not using technology, like airlines to go here and there, water lines, electricity, gas lines, and building materials, how will you maintain yourself? You will have to use some of this, but that is helpful. Make a sacred environment for bhakti.

[Question:] I guess the idea would be to create an environment where a society of devotees can learn to live independently from cities and industry.

[Question:] She was born on Ratha-yatra day. She is so lucky. She has graduated recently from a very big American university - Duke University.

[Question:] She is very qualified. She is an artist.

[Srila Narayana Maharaja:] That is why she is grave. [Turning to the young lady:] But you will have to take admission in our university, where we have studied - Haridasa Thakura University. You know Srila Haridasa Thakura?

[Srila Narayana Gosvami Maharaja:] We have been admitted there, and we have learned something there. If you are admitted to that university, your knowledge will be complete. Srila Haridasa Thakura never read ABCD or anything like that. He was only engaged in chanting and remembering Krsna, and he realized all essential truths. He realized the nature of this entire world, of Svarga (heaven), of Vaikuntha, and of Goloka Vrndavana, as did Sri Narada Gosvami. I am happy to meet you.

"Following the instructions of the great sage Aurva, Sagara Maharaja performed asvamedha sacrifices and thus satisfied the Supreme Lord, who is the supreme controller, the Supersoul of all learned scholars, and the knower of all Vedic knowledge, the Supreme Personality of Godhead. But Indra, the King of heaven, stole the horse meant to be offered at the sacrifice. King Sagara had two wives, Sumati and Kesini. The sons of Sumati, who were very proud of their prowess and influence, following the order of their father, searched for the lost horse. While doing so, they dug into the earth very extensively. Thereafter, in the northeastern direction, they saw the horse near the asrama of Kapila Muni. "Here is the man who has stolen the horse," they said. "He is staying there with closed eyes. Certainly he is very sinful. Kill him! Kill him!" Shouting like this, the sons of Sagara, sixty thousand all together, raised their weapons. When they approached the s age, the sage opened His eyes.

"By the influence of Indra, the King of heaven, the sons of Sagara had lost their intelligence and disrespected a great personality. Consequently, fire emanated from their own bodies, and they were immediately burned to ashes.
PURPORT
The material body is a combination of earth, water, fire, air and ether. There is already fire within the body, and our practical experience is that the heat of this fire sometimes increases and sometimes decreases. The fire within the bodies of the sons of Sagara Maharaja became so much hotter that all of them burned to ashes. The fire's increased heat was due to their misbehavior toward a great personalityThey were killed by the fire of their own bodies because of insulting a great personality.

" The great and saintly king Bhagiratha brought the Ganges, which can deliver all the fallen souls, to that place on earth where the bodies of his forefathers lay burnt to ashes.

"Because the sons of Sagara Maharaja had offended a great personality, the heat of their bodies had increased, and they were burnt to ashes. But simply by being sprinkled with water from the Ganges, all of them became eligible to go to the heavenly planets. What then is to be said of those who use the water of mother Ganges to worship her?"]