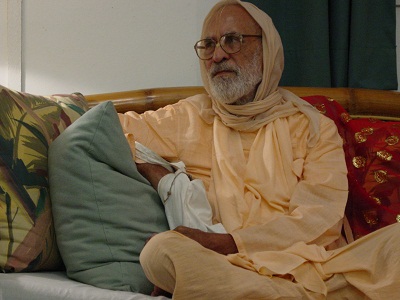 Interviewer: Most devotees live in India. Can you tell me the percentage of devotees who live in other countries, like America, England, and France? What are your goals, and what message would you like to spread around the world?

Srila Gurudeva: We are trying very hard to spread our message, and before me, Srila Bhaktivedanta Svami Prabhupada tried as well. In India we have been trying since ancient times, and yet it was in India that the Mahabharata War took place. In general, most people are sense enjoyers, and therefore they do not realize the message of our Gita and Bhagavatam – that we are all in one family. We have some devotees throughout the world, but they are few in number compared to the worldly population. Some are following our spiritual principals, but most do not follow, and thus there is no solution to the worldly problems. If the entire world would one day follow this principle – that we are all brothers and sisters in one family – the entire world would very easily become peaceful.

Interviewer: What is the difference between Christianity and your philosophy?

Srila Gurudeva: I think there is not so much difference between Christianity and this philosophy of prema, or love and affection. They believe in God and we believe in God. G-O-D. G means generator (of this entire universe), O means operator (who manages everything), and D means destroyer. He is not the destroyer of the soul, but of this body, which is not us. He can destroy millions of universes in a second, and again create them. That person is God.

Jesus never declared, "I am God", but rather, "I am the son of God." He liked this name, and declared, "He is my father, Krsna." Jesus also taught this philosophy. He went to India when he was about sixteen years old, and he visited many places of pilgrimage, like Vrndavana, Ayodhya, South India and Jagannatha Puri. In Puri he saw the Deities of Jagannatha, Baladeva and Subhadra, and he heard Lord Jagannatha (meaning 'Lord of the Universe') addressed as Krsna. In that part of India, the name Krsna is pronounced Kroosna. Because of different languages, Greek and Hebrew, the name became Kroosta, then Krista, and now it is pronounced Christ. Krsna, Kroosna, Krista and now Christ – they are the same.

Krsna has immense love and affection for all beings, and that is why He is addressed as Father. We consider that the Supreme Personality of Godhead Krsna must also be a high class of lover; very rasika, meaning full of affectionate dealings.

But there is something different in our understandings. Nowadays they don't think that fish, cows, bulls, chickens, trees, and creepers have life. They think that these beings have been created for our sense gratification. We know that all beings in this world – even grasses, trees, ants, birds, and creepers – have life, and that life is called 'soul.' The soul is non-different from Krsna or Christ, in that all are His sons and daughters.

We possess great mercy for all living entities. We have no aggressive mood, whereas they eat little calves and other meat, and they eat eggs and drink alcohol. Since they eat eggs, then why don't they take the eggs of their own mothers? There are eggs in human mothers, so why don't they take this? They must know that all creatures have life, and we have no authority to destroy them. We have no power to create anyone, so we have no qualification to destroy them.

Srila Gurudeva: Who gave the power in this seed?

Srila Gurudeva: But the Almighty has a form, and that form is eternal. He is so beautiful, lovely, and attractive. He has created this world, not us. In this way, try to love the entire universe.

Interviewer: Another question. If you were able to speak to the President of the United States, Mr Clinton, what would you tell him?

Srila Gurudeva: I think he is a very good person. He wants world peace, and we honor him for this; but we know that there are also so many drawbacks in him, just as a general person has so many drawbacks and weaknesses. He is so lusty that he cannot control it. He acted immorally with his office girl, and there was even a court case about that.

If he believes in God, he should try to love all beings. He should be liberal, and not think, "I am from America. We should do welfare only for America." He should be like Gandhiji, and help the entire world. He should especially know that we are all part and parcel and eternal servants of Krsna. We have divided the world into many parts, like America, India, Australia, Asia, and Europe, but Krsna has not divided it. No one can come to America without a passport or visa. Mr. Clinton should be liberal, but I know that he cannot be.

Srila Gurudeva: Yes, I would like to tell you all something. Whether we know it or not, the names of the Supreme Personality of Godhead are very powerful. Even though we do not see Him, and we pray, "O Father, give me bread and butter; we want to be happy in this world," He hears our prayers and sprinkles His mercy. In fact, it doesn't matter or not whether you pray to Him; still He sprinkles His mercy like a rain shower.

We should chant His holy names: "Hare Krsna Hare Krsna Krsna Krsna Hare Hare, Hare Rama Hare Rama Rama Rama Hare Hare." These names are more powerful than fire. If you put your finger in fire, knowingly or unknowingly, the fire will burn you. Similarly, whether or not you are aware of the power of His names, your chanting will burn all your unfavorable moods – your ignorance and offenses. He will give you His love and affection, and soon you will be happy forever.

Interviewer: Thank you very much. I would like to ask you one final question. Are you considered the supreme leader at this time? Or, what is your position?

Srila Gurudeva: I do not consider myself a leader or any kind of great saint. I am simply a devotee. I want to practice what I explained to you, and to preach throughout the world that only by practicing these things can we be happy forever. I am not a high class of leader or saint. I am only a simple practitioner of bhakti.

Interviewer: Mahalo and aloha to you.

Srila Gurudeva: Aloha and Hare Krsna to you. I am very happy. Please always consider that we are in one family – Mahaprabhu's family. We are preaching the mission of Srila Rupa Gosvami and Sri Caitanya Mahaprabhu, who personally accepted the guru-parampara from Brahma to Srila Bhaktisiddhanta Sarasvati Thakura. We are all in one group. We should try to help each other.

Interviewer: I would like to ask one more question. A twenty-one-year-old model in India said, "Beauty pageants give us women a platform to voice our choices and opinions," and she was named Miss Universe today. I would like to have your opinion on the women's voice in India.

Srila Gurudeva: From ancient times, Indian women have been honored by all Indians. The first Miss Universe was Sita-devi (The consort of Sri Rama), and then Draupadi (The wife of the Pandavas). Before Draupadi, undoubtedly and indisputably, Srimati Radhika was Miss Universe. Always praising her, even the Supreme Personality of Godhead Krsna put His head at Her lotus feet.

We follow these principles. We give honor to elderly ladies as our mother, we see those of the same age as our sisters, and regarding those who are younger, we always treat them like our darling daughters.

Srila Gurudeva: So many of my darling daughters, sisters, and mothers are here. This is the tradition of India.