What Is The Real Truth? 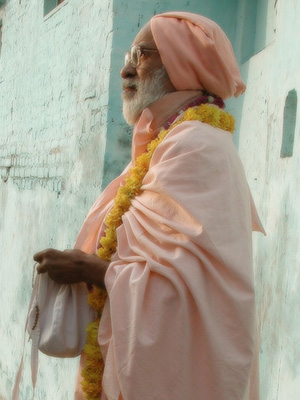 There was once a great emperor. His name was Hariscandra, his wife's name was Saibya, and his very beautiful young son was Rohitasva. Being emperor, and being very truthful, he used to always keep his word. He was 'satyavadi'; this means he always told the truth. He used to say, "What I will tell, I will do." For this reason he was renowned everywhere, and he was very prominent in the whole world.

There was one rsi named Visvamitra. He was a very advanced bhagavad-bhakta devotee, and he was very, very worried about Hariscandra. He considered, "What he follows is worldly truth. It has no value. There is no value at all to this worldly truth. No-one in this world, except for the devotees, can speak the truth. If I ask, 'What is your name?', he will tell me, 'My name is Hariscandra'. 'Who are you?' 'I am the emperor'. 'Who is he?' 'He is my son'. 'Who is she?' 'She is my wife'. But all this is false. In this world there is only one truth: 'We are transcendental. We are servants of Krishna.' This is truth. Krishna is Truth, and these worldly things are all, all, all false".

So Visvamitra was very, very worried. One day, in a dream, he went to the king and told him, "You always speak the truth, and you are very humble. So I want you to give me something; I want some donation".
"Yes, you can take any donation."

Then Visvamitra ordered, "You should give me your whole kingdom".

Hariscandra replied, "Yes, I will give it to you". Visvamitra at once left the dream, but the next morning he returned to the king. He asked, "Do you remember something?"

"I don't remember."
"Oh, have you given your whole kingdom to me in a dream?"
"I gave it, but in a dream."
"So, do you think your dream is true or false?"
"I think it is true."
"Now, therefore, in your wakened state, when you are fully conscious, you should make a sankalpa. Now you should make a vow and say, 'I am giving my kingdom.'"

He then put water in the hands of the king and said, "You should say, 'I am giving my whole kingdom to you'". And he did it.

Then the rsi told him, "I am a brahmana. So you must give some daksina. Without daksina, no vow is complete. Something has to be given, even one percent of what you have already given. Actually I do not want one percent; but a little."

"What would you like?"
"Ten thousand gold coins."
Hariscandra ordered his treasurer, "At once give it".

Visvamitra became angry. "Oh, now this kingdom is mine! The whole treasury is mine. All is mine. Have you forgotten? Now the kingdom, treasury and everything is mine. So you cannot give from this. Somehow you should pay in another way."

Hariscandra understood that the whole kingdom and treasury now belonged to Visvamitra-so with what could he pay? He saw that, 'Now my wife, my son, and I-just three-are remaining, and everything else is gone'. Then he said, "I will sell myself, my wife, and my son-then I will pay". The rsi told him, "You cannot sell yourself in my kingdom. Outside of my kingdom you can sell yourself-otherwise the money will mine."

So now the king was very perplexed.

Then Visvamitra told him, "Although this is all mine, if you go to Kasi, (which is not considered part of this material world, which is considered Lord Siva's abode, and) which is on the top of Lord Siva's trident, you will then be outside of my kingdom. So you can go there and sell yourself."

After some time, maybe one or two months, Visvamitra arranged that a snake bit the king's son in the night-and he died. The brahmana was so cruel that he said, "You should make your own arrangements-independently. I've purchased you, so I will not give anything more. I will not pay for the cremation. Go yourself, and arrange to perform the samskara of your dead son."

In the dark night his wife Saibya took her son to the cremation ground on the bank of the Ganges and there was so much rain. It was extremely cold, and no-one was there. Weeping, she took her son to the cremation ground. Hariscandra never expected to see his son there-in death, nor did he expect to see his wife in her condition. He said, "Don't do anything without paying tax. First pay tax, and then you can do whatever you want." But she had nothing to pay. The dead body was wrapped in the veil of the queen. Only that was there. At once a lightening bolt came, and the King could see his dead son, and he could see that the woman was his wife. He began to weep, and his heart began to break. "Oh God, what happened?" He was weeping, but being very strict in his job he said, "Still you should pay me. Now I am the watchman of the cremation ground."

She said, "I have nothing, I can give you half of my veil". He began to tear it and at the same time Visvamitra, Yamaraja and the demigods came there. Visvamitra said, "At once, stop!"

He put his hand on the dead body of the son, saying, "Quickly, quickly; you should get up".

In a moment the boy stood up and looked upward. Then Lord Brahma said to Hariscandra, "You should take any boon". The king said, "My boon is that I should not be tested so hard."

Visvamitra told him, "By my mercy, I did so to make you realize that you were not telling the truth. What you were doing was all false. Now you have sold your wife and child. But why are you thinking, "He is my son?" Why are you thinking that, "she is my wife and I am emperor?" You are not emperor. In this world no-one can speak the truth. Never. "

"I came to you because you are a very good person. You should realize that only your soul is you, and that soul is part and parcel, an eternal servant of Krishna. You should realize that this is the truth. There is no birth and death of the soul. Due to these worldly truths you are coming and going in this world. Now I am returning this kingdom to you. Give it to your son Rohitasva and you should come with me to the forest. You should remain with me in my hut, and you should chant: HARE KRISHNA HARE KRISHNA KRISHNA KRISHNA HARE HARE, HARE RAMA HARE RAMA RAMA RAMA HARE HARE. This is truth. Try to realize this. I came to you by my mercy to give you this true knowledge."

So you should all understand this and not neglect this-it is the only true source of happiness.